Enjoy The Hell Out Of This Little Girl Telling A Street Preacher To Shut! UP! (Video) 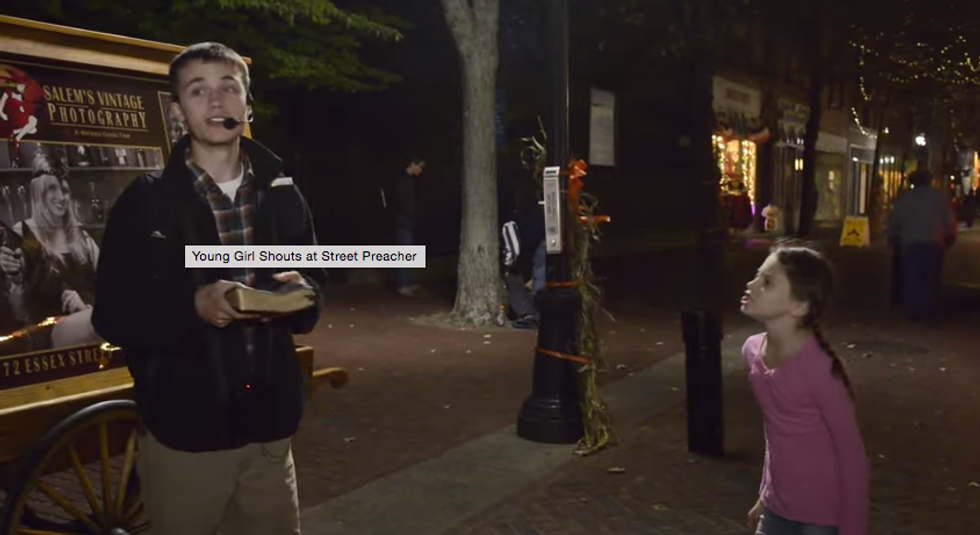 You know those guys who stand on the street, or maybe even ring your doorbell just when you're sitting down to dinner, to Biblesplain how you are going to Hell, where you will burn forever and ever, unless you take their pamphlets? Sure you do, and you know you want to scream at them to shut up already, but you probably don't do that because you are A Lady.

This little girl, however, is not yet A Lady. But she is awesome. (Or her godless hippie-dippy commie parents who coached her to say these things are. Whatever. Don't care. Still awesome.)

Apparently, street preachers blah blah blahing on Halloween is something of an annual tradition in the town of Salem, Massachusetts, because Halloween is bad and evil and wrong. Or it originally belonged to Jesus and must be seized back from the pagans who stole it, according to Kirk Cameron. Either way, it's apparently a good time to get your preach on -- and a time when the locals probably get pretty sick and tired of hearing it. So you this kid's just saying what they're all thinking.

With a mouth like that, we think she probably has a bright future as governor of New Jersey one day.