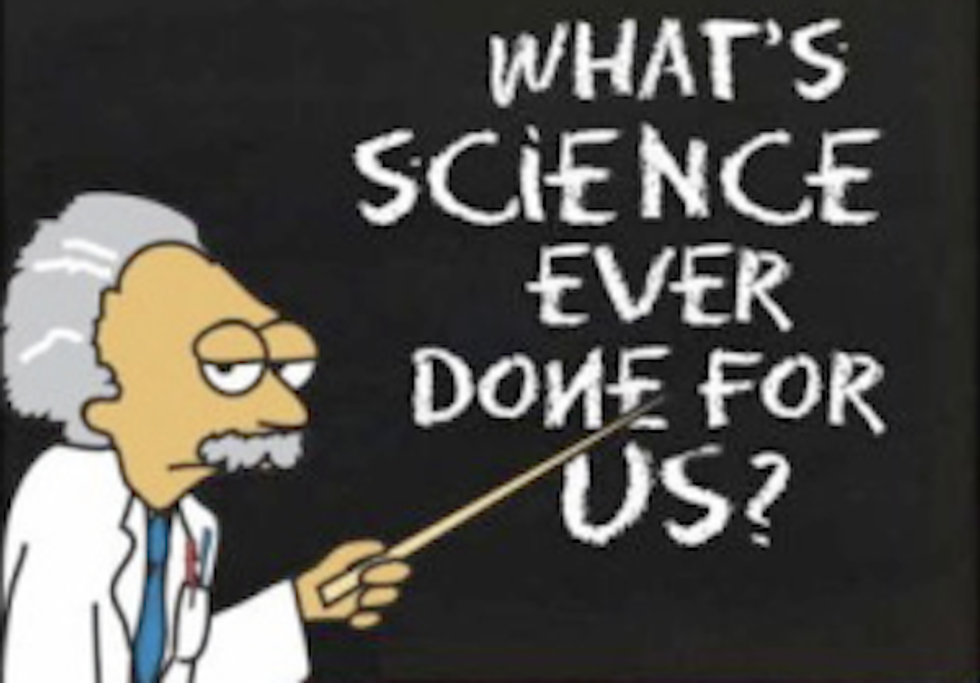 Shouldn't polluters have an equal seat at the table?

EPA Administrator Scott Pruitt proudly announced Tuesday that the agency is getting rid of bias and conflicts of interest on its scientific advisory boards through new rules that should keep independent scientists off the boards while opening them up to representatives from the industries the EPA regulates. How's this for a nifty redefinition of "bias"?

Effective immediately, scientists who receive EPA funding cannot serve on the agency's three major advisory groups. Some Republican lawmakers have been pushing for similar changes to the agency's advisory boards for years.

"We want to ensure that there’s integrity in the process and that the scientists that are advising us are doing so without any type of appearance of conflict of interest," EPA head Scott Pruitt said at a press conference announcing the directive.

Since scientists employed by industry haven't ever qualified for EPA grants, that means all sorts of completely unbiased, unconflicted representatives of chemical, energy, and other polluting industries will now be free to advise the EPA on policy priorities, while scientists who've been tainted by EPA grant money will be excluded, since obviously they're a bunch of biased money-grubbers. In addition to the purge of scientists from the advisory groups, the EPA will also shrink the size and scope of the key panel, the Science Advisory Board, which provides advice to the EPA administrator.

Pruitt added an air of holiness to the announcement by citing the Book of Joshua, since if you want good science advice, you always go to the Bible:

On the journey to the promised land, "Joshua says to the people of Israel: choose this day whom you are going to serve," Pruitt said. "This is sort of like the Joshua principle — that as it relates to grants from this agency, you are going to have to choose either service on the committee to provide counsel to us in an independent fashion or chose the grant. But you can’t do both. That’s the fair and great thing to do."

Getting rid of experts will certainly free the science advisory groups of scientific bias. Surely people whose funding comes from industry will be far more objective than those tainted by EPA grant money.

Michael Halpern, deputy director of the Center for Science and Democracy, wrote on the Union of Concerned Scientists' blog that the changes will

[ban] some independent scientists from providing scientific advice while giving those with conflicts a free pass. Collectively, these actions create an abhorrent double standard: scientists who rely on public funding are left out, while industry scientists face no restrictions on service. Fossil fuel and chemical companies already enjoy undue influence over EPA policy under Pruitt. Now, they’re taking control over science advice to the agency.

Just how many real scientists will be booted? Halpern estimates about half of the current members of the Science Advisory Board have received EPA grants at some time in the past, and explains why that's not a conflict, for fuckssake:

EPA grants are funded on the basis of merit and promise. Recipients tend to be the most knowledgeable experts on the issues that the EPA is supposed to address: protecting our air and water from environmental and public health threats.

The new rules, Halpern says, will leave scientists with a fine Catch-22: seek EPA grants to do good science, or refuse an important source of funding so they'll be able to someday volunteer on an EPA board and provide expert advice to the agency. And scientists with funding from industry, who've never gotten EPA grants because prior administrations knew what a conflict of interest really is, will now be considered "unbiased" and fit to serve on the advisory boards. Hell of a way to run a regulatory agency, huh?

In addition to the new rules, Pruitt also announced the new chairs of the three advisory committees Tuesday. The new head of the Science Advisory Board, which in the past offered scientific advice to the administrator but will now rubber-stamp industry concerns, will be Michael Honeycutt, a Texas toxicologist. Honeycutt sounds like he's got the right dynamic for the EPA's new frontier:

[He] once told Congress he didn't agree with the EPA's toxic evaluation for mercury, and he's argued against the agency's ozone standards, according to a 2014 investigation by InsideClimate News and the Center for Public Integrity.

The new head of the Clean Air Scientific Advisory Committee, which provides scientific guidance on air quality standards, is Tony Cox, a risk analysis consultant from Colorado. Mother Jones reports Cox has "authored research saying the benefits of pollution reduction are overstated, and Science magazine* notes his consultancy clients include companies in the oil and chemical industries, so he seems like a bang-up choice.

The Board of Scientific Counselors, which helps set EPA's research priorities, will now be led by Paul Gilman, who at least worked at the EPA previously, albeit during the George W. Bush administration, when EPA was merely industry-friendly, not industry-run. Science reports Gilman comes from "Covanta, a New Jersey company that handles waste, including incinerating waste to produce energy." Clean-burning tire fires for everyone!

Scott Pruitt has been doing a hell of a job at EPA, and we're looking forward to his upcoming announcement that the second letter of the agency's name will be changed to "Predation."

*Science seems to have mixed up the boards Cox and Gilman will lead; other sources have them in the right jobs.

Update: For a jaw-dropping look at some of the other industry flacks being considered for these boards, check this New Republic piece, in which we learn that Science Advisory Board nominee Robert Phalen, of UC Irvine,

has argued that the air is currently too clean, because children’s lungs need to breathe irritants in order to learn how to fight them. “Modern air,” he said in 2012, “is a little too clean for optimum health.”

Yr Wonkette depends on your contributions to keep us breathing. Please click here to donate!