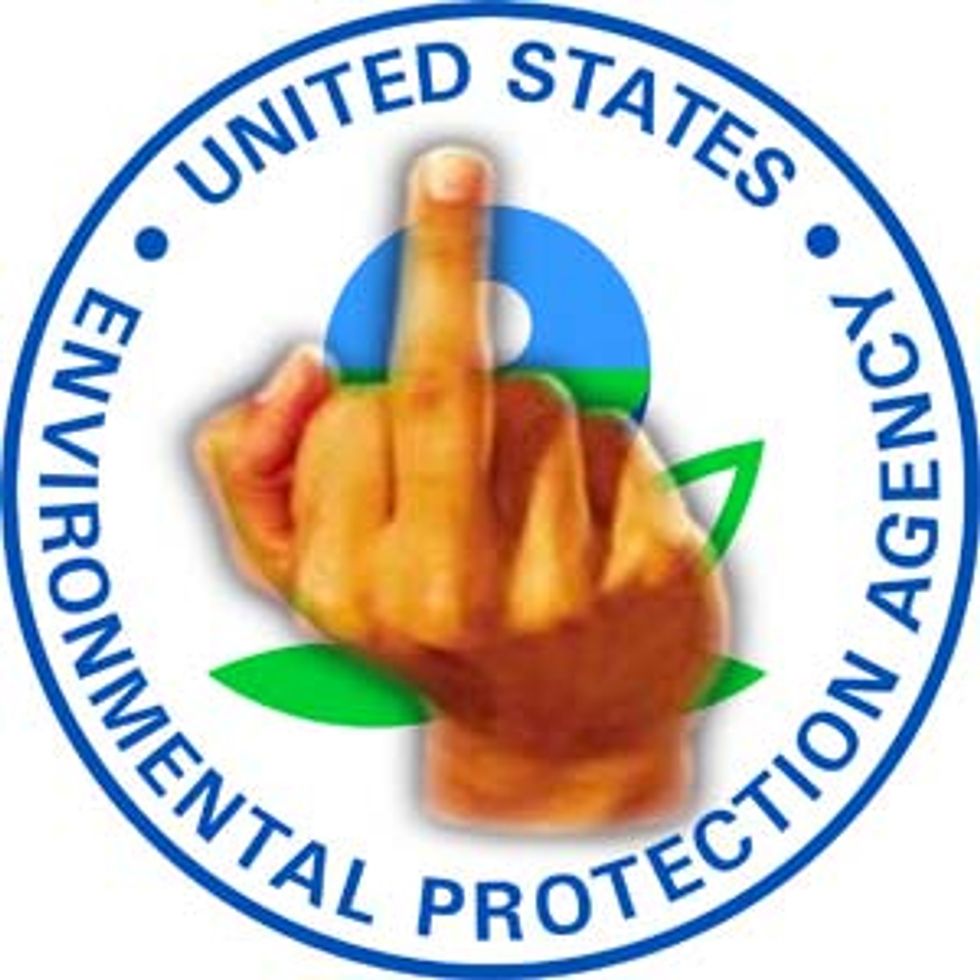 That new logo needs a little work. Could we wither the leaves?

This just might signal a teensy bit of a change in emphasis for the Environmental Protection Agency under the Trump administration and business-friendly EPA administrator Scott Pruitt: The mission statement for the EPA’s Office of Science and Technology, which among other things, develops clean water standards, has been revised to remove a line stating that those standards will be "science-based." A group of volunteer scientists and academics called the Environmental Data and Governance Initiative (which makes for a very EDGI acronym) has set up monitoring software to track changes on government science websites, and they noticed this doozy of a change to the OST's mission statement as of January 30:

One of these things is not like the other...

Taa daa! No more science! So now, instead of basing water quality standards on what peer-reviewed scientific research says are minimally safe levels of pollutants, the OST will be satisfied with "economically and technologically achievable standards." It's not merely a change in semantics; it's a real change in policy and procedures, according to EDGI's Gretchen Gehrke, who believes the changes

speak to a long-running debate over how polluters should be regulated. Environmentalists often argue for performance-based regulations, where air and water is required to meet a certain standard of quality, no matter how companies choose to meet that standard. Gehrke says removing “science” from OST’s missions and replacing it with “technologically achievable” means the EPA is moving toward more technology-based standards, where polluters just have to install certain types of technology.

So instead of setting a standard and insisting industry meet it by whatever means necessary, the EPA will look to industry and set standards based on whatever won't be too expensive or require new, profit-reducing infrastructure. What (FLINT!) could (FLINT!) possibly (FLINT!) go (FLINT!) wrong? New Republic's Emily Atkin notes that would be congruent with Scott Pruitt's stated emphases for the agency, and with whom he considers it his mission to serve:

Pruitt didn’t mention public health once in his first speech to agency employees, instead focusing on improving the EPA’s relationship with private interests. In a tweet after his speech, Pruitt said he was committed to working with several types of “stakeholders” on environmental stewardship. He did not mention environmentalists as one of those stakeholders.

Pfft, what good have environmentalists ever done for the bottom line?

Andrew Rosenberg, of the Union of Concerned Scientists, points out that even with a new bunch of morons in town, the statutory mission of the EPA remains the protection of public health and safety, not giving a gentle ball-massage to industry (we added that last bit -- don't complain to the UCS).

“So what you want a science office to do is make sure you’re using the best science available, and what’s safe for the public. That’s a pretty critical role.”

Rosenberg said it would be a “major change in direction” if the EPA stopped prioritizing the best science and focused instead on what’s most “economically achievable” for businesses. “I think we have to be very mindful,” he said. “It seems like this EPA and this administration broadly seem to view their job as being a support for business as opposed to safeguarding public health.”

Now where would Rosenberg ever get that idea? Possibly the appointment of a guy who wants to dismantle the EPA to be EPA administrator was a clue. The new EPA motto, "Do We Really Need All These Species?" was another. And the official addition of irony quotes around "Protection" was the capper.

Wonkette is ad-free, toxic-free, and supported only by HIPPIES LIKE YOU.