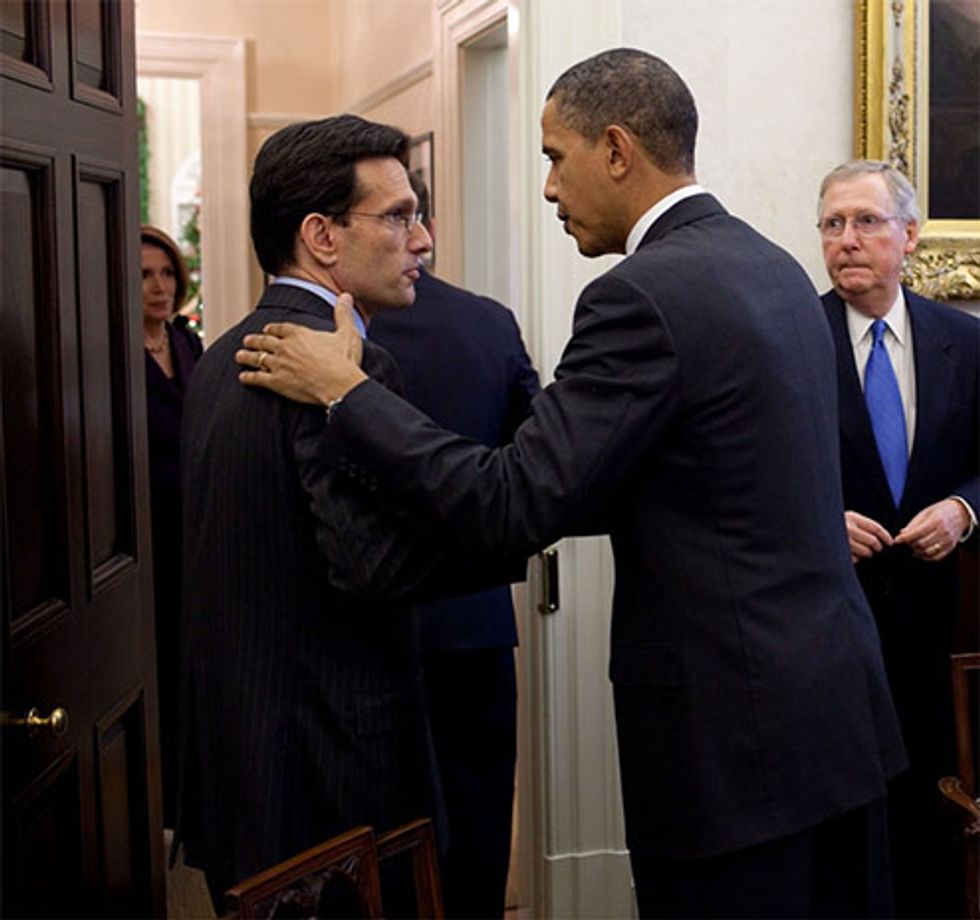 Gather round, ye children of this fair land. It has cometh to our attention that scoundrels, muckrakers, and charlatans hath sought and attained positions within our genteel federal government. These miscreants have the audacity to make partisan public speeches – IN PUBLIC, no less. These divisive, partisan activities and vile words are not acceptable to the gentlemanly persuasions of Eric Cantor, who nearly fainted from ferklemptness recently.

How were Cantor’s delicate sensibilities nearly destroyed? It started when the dumb stupid President called him to wish him a Happy Passover and discuss immigration reform. Yet earlier that very same day, the President gave a speech attacking Republicans for not moving such legislation! The audacity of some people! Everyone knows that Republicans never, EVER, make partisan speeches to raise money one day, only to try to work together with Democrats on another. (Hahaha, they actually don't, because that second thing.)

So Bamz released a statement recently on immigration reform to mark the one-year anniversary of the Senate introducing a comprehensive immigration reform bill. In the statement, he knocked Republicans for not taking any action on the issue. The Hill has an excerpt:

“Unfortunately, Republicans in the House of Representatives have repeatedly failed to take action, seemingly preferring the status quo of a broken immigration system over meaningful reform,” Obama said. “Instead of advancing commonsense reform and working to fix our immigration system, House Republicans have voted in favor of extreme measures like a punitive amendment to strip protections from ‘Dreamers.’”

Well, that’s nothing really new. Democrats have pretty routinely tried to get the House to move on this issue, and this doesn’t seem all that blistering.

But Eric Cantor is a delicate flower and his fee-fees bruise easily. So when Obama called later that day to wish a Happy Passover, the conversation meandered into immigration reform. THE NERVE!!!1! We were not on the call, but can only imagine that the President said something slightly nicer, but in a similar vein of, ‘Hey, how about your guys do something about the broken immigration system? Also, you are a giant prick and I fucking hate working with you because you are A ASSHOLE.'

Apparently he only said that last part, because afterwards, Cantor lost it.

“You do not attack the very people you hope to engage in a serious dialogue. I told the president the same thing I told him the last time we spoke. House Republicans do not support Senate Democrats' immigration bill and amnesty efforts, and it will not be considered in the House.”

“After five years, President Obama still has not learned how to effectively work with Congress to get things done,” Cantor said in the statement.

So calling the President incompetent because he can’t work with an obstructionist GOP House is totally fine, but calling out Republicans for not moving on immigration reform, something even other House Republicans have done, is unacceptable.

“I hope the president can stop his partisan messaging, and begin to seriously work with Congress to address the issues facing working middle class Americans that are struggling to make ends meet in this economy,” Cantor said.

Seriously, what a dick. It’s not like Cantor is reaching out to the White House to discuss anything. At least the President called and is showing some modicum of effort to work with you bunch of obstinate, anti-women,anti-gay,anti-poor,anti-healthcare assholes to try to get something productive done.