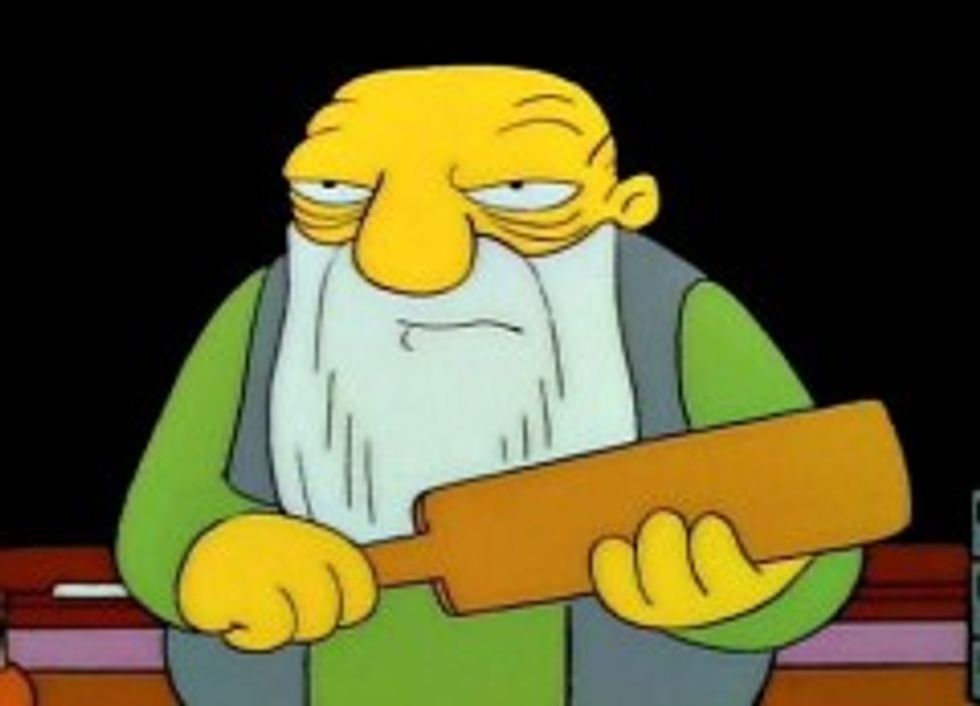 Have you guys heard that new joke making the rounds? It goes like this: what’s got two thumbs and doesn’t realize that racism is over everywhere except on the Democrat plantation, so he keeps stirring up racial resentments by persecuting poor innocent white folks and suggesting he won’t let states restrict individuals’ voting rights as if the states have no rights either?This fucking guy!

Yep, Eric Holder, taking a break from assuring Vladimir Fucking Putin that the United States won’t torture or kill a fugitive if the Russians will just pretty please hand him over already, is back at it with the reverse racism. Speaking to the National Urban League the other day, Holder announced that the Justice Department would ask a federal court in Texas to restore the “preclearance” requirement that the Supreme Court effectively struck down last month when it invalidated Section 4 of the 1965 Voting Rights Act. The DOJ will instead rely on Section 3, which SCOTUS left alone, to argue that Texas should still have to get permission from the federal government to change its election procedures. (We will leave it to the more lawyerly members of Yr Wonkette to wonksplain the legal ins and outs here, since our undergraduate film degree restricted our education on these matters to a screening of “Mississippi Burning” sometime back in the early 1990s.)

We can’t imagine why Texas should have to do this, because it has been a good eleven months since a federal court totally chastened the state by smacking down its redistricting efforts and what part of "John Roberts has since announced racism is over so Jubilee!" do you not understand? Luckily Texas Governor Walker, Texas Ranger, is here to set us straight:

Gov. Rick Perry of Texas cast Mr. Holder’s remarks as an attempt by the Obama administration to weaken the state’s voter-integrity laws and said the comments demonstrated the administration’s “utter contempt for our country’s system of checks and balances.”

“This end run around the Supreme Court undermines the will of the people of Texas, and casts unfair aspersions on our state’s common-sense efforts to preserve the integrity of our elections process,” Mr. Perry said in a statement.

Texas Senator and our favorite Canadian anchor babby Ted Cruz was no less sanguine. But he’s a Harvard-trained lawyer who has been charged by God with a sacred quest, so surely he knows what he’s talking about:

Attorney General Holder's recent announcement is just the latest example of his politicization of the Department of Justice. Holder's refusal to accept the judgment of the U.S. Supreme Court regarding preclearance continues the Department's longstanding pattern of refusing to follow the law.

We’ll just pause here to remind the foreign Canadian interloper with the fancy-pants law degree that the DOJ is suing under Section 3 of the VRA, which the Supreme Court left alone. Therefore Section 3 is still the law and Eric Holder is deploying it in his quest, which is appropriate seeing as how he is the chief law enforcement officer of the land. It’s funny how the reactions of so many conservatives ignore this point, or it would be funny if it didn’t make us want to <headdesk> until we're in a coma.

Here for example is Peter Roff at U.S. News and World Report whining about Holder’s attempt to “outmaneuver” the Supreme Court while never mentioning the DOJ’s use of a section of the VRA that is still very much intact. (As a bonus, Roff buttresses his argument with quotes from “former law professor” Horace Cooper, which sounds impressive until you realize Cooper once worked for Tom Delay and was a minor figure indicted on corruption charges in the Jack Abramoff scandal, but that only enhances his credibility - conservatives are like street gangs that way.)

And here is another law professor, Ken Klukowski, stirrin’ up the rubes at Dead Andy Breitbart’s Casket Warehouse and Embalming Emporium:

The imminent judicial beat-down of Holder highlights that this case is not about the rule of law and instead abuses the federal courts for political purposes to rile up the far left and demonize Republicans. […]

Although VRA Section 5 only applies to states meeting Congress’ criteria (and until Congress enacts a new Section 4 there are no criteria and thus no states are currently under preclearance), Holder now wants a federal court to order Texas to submit to preclearance anyway. […]

If this case goes all the way back to the Supreme Court, Roberts and the other justices are likely to see this action for what it is, a lawless rebellion against both Congress’ power to legislate and the Supreme Court's overriding power to declare government actions and laws unconstitutional.

So Holder cannot win in court. All he can do is try to create a national narrative that somehow Texans are engaged in racist voter suppression and whip up the black and Hispanic communities to rally to his (and Obama’s) side as they fight Republicans.

Not one mention in the entire article of the actual section of the VRA, which is still very much the law, under which the DOJ is seeking relief from the courts. Then we read Klukowski’s bio and saw that he is a law professor at Liberty University’s law school. We’re pretty sure you can get a J.D. from Liberty by doing nothing more than reading the New Testament and mailing in the proof of purchase from a cereal box. If this country had any shame, everything ever written at Dead Andy’s Klavern Tavern would be limited in its distribution by the amount of ink those nitwits could afford for the mimeograph machine.