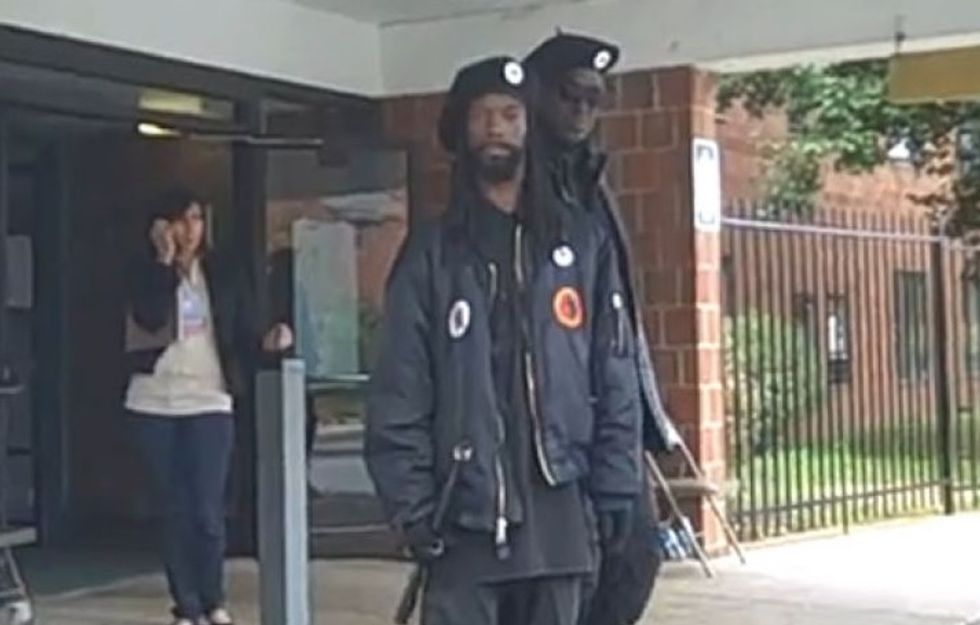 The Department of Justice is sending federal monitors to observe elections in 18 states, and the Wingnuttosphere is pretty darned cheesed about it, because this can only lead to tyranny and the UN taking over and -- worst of all -- black people voting, many of them as often as once!!! According to The Hill:

“One of the Justice Department’s most sacred responsibilities is ensuring access to the ballot box for every eligible American,” Attorney General Eric Holder said in a video message on the department’s website.

“I want the American people to know that the Justice Department will stand vigilant — working in a fair and nonpartisan manner to ensure that every voter can cast his or her ballot free of intimidation, discrimination or obstruction,” he said.

This will be the first national election since the Supremes gutted the Voting Rights Act last year, and obviously, Eric Holder is trying to fuel a race war or something. Just look at the headlines!

From the "Powerline" blog (which surprisingly has nothing to do with the electrical grid): Eric Holder Deploys Poll-Watchers to Look for “Discrimination.” Blogger John Hinderaker asks why this is even necessary, since The Blacks have all the power in American elections anyway:

Have you ever seen anything at a polling place that remotely amounted to intimidation, discrimination or obstruction? I haven’t. Presumably this is all part of the Democrats’ effort to keep alive the myth of voter suppression. That pretense seems to be a key element in their strategy to keep African-American voters in the fold, notwithstanding that the Democrats’ policies are devastating to black voters’ interests. And I guess it must work.

But doesn’t reality intrude at some point? Didn’t blacks vote more heavily, pro rata, than whites in 2012? I believe they did. Does that mean that white voters are somehow being “suppressed”? And when blacks go to the polls in record numbers, as they have been, isn’t it blindingly obvious that no one is trying to intimidate, obstruct or discriminate against them?

And he's right -- blacks actually did have higher electoral participation in 2012, for the first time in history. Therefore, there are no efforts to change that, nope, none at all. Gosh, that Eric Holder sure is paranoid.

Rick "Get A Brain" Moran at "American Thinker" (proving that our truth-in-labeling laws are far too weak) headlines his piece -- and we're pretty sure he is being sarcastic -- "The integrity of the ballot is in the very best of hands," and also warns that George Soros is getting his shock troopers into the act as well:

Meanwhile, the George Soros-funded group Common Cause is also sending poll watchers across the country to insure that there's plenty of work for Democratic lawyers who see GOP perfidy under every bed and behind every corner.

But don't worry, armed citizens, Moran sees right through the lies, and knows what the DOJ's real agenda is:

A "fair and nonpartisan manner"? If so, it would be a first. And who gets to define "intimidation"? Or "obstruction"? If a GOP poll watcher questions whether someone can legally cast a ballot, will that be considered "intimidation"? Of course it will be.

Those "poll watchers" are not there to ensure a fair vote. They are there to harass those who do. Guaranteeing that as many people cast their ballots as possible -- regardless of whether they can legally vote -- is the goal of both the DoJ and Common Cause.

At the bizarrely formatted TownHall.com, Wonkette frenemy Katie Pavlich is very, very upset that the DOJ will be looking to make sure that bilingual voting materials will be available, because obviously Holder wants illegal aliens to vote. She lazily copypastes a blockquote from the DOJ website, and just puts the scary part in boldface (we've used italics since WordPress doesn't do bold in blockquotes, the bastards):

To be all fair and crap, we double-checked -- the emphasis is all Pavlich. Eric Holder, why are you helping foreigners to vote, huh?

And there's plenty more: "Liberty News" asks whether Holder is "Hoping to Fix Elections?" and warns that Holder is working on Barack Obama's direct orders, trying to find "something -- anything -- he can say is wrong in the elections in order to stop a GOP landslide." Libery News also describes the Voting Rights Act as "the federal election law that forced southern states to go hat-in-hand to the feds to approve state election rules" and praised the Supreme court for "returning power to the states." Not that the states ever abuse that power.

The Blaze ominously suggests that Big Brother is trying to scare away patriots: "As Americans head to the polls on Election Day, voters in 18 states will be casting their ballots under the watchful eye of the Department of Justice" and repeats a debunked claim that armies of non-citizens are voting all over the place.

Oh, and of the pieces we looked at, all but two mentioned the Great Election Fraud of 2008, when two New Black Panthers threw the national election to Barack Obama by standing in front of a single. polling place.

Yr Wonkette would just like to wish a happy Election Day to all of you, and to urge federal monitors to keep an eye out for overzealous patriots who may want to take their Second Amendment Voting Tool to the polls.