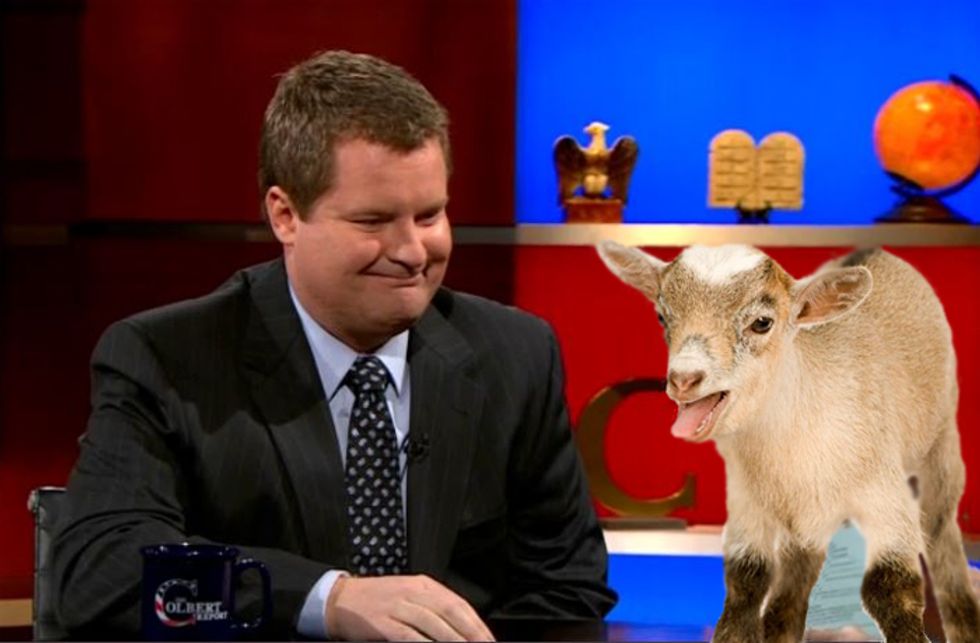 Not technically a lamb, but it'll do.

Wingnut "thinker" Erick Erickson is doing that thing where, though he doesn't like Donald Trump, he's trying to prove he is jes' folks, a salt-of-the-earth walking heart attack who lives in Macon, Georgia, and is simply not interested in your fancy East Coast Beltway values from San Francisco. Particularly, he ain't understand the fancy-ass French food being served at tonight's White House state dinner with Crown Prince Sexxxy of France, Emmanuel Macron:

Ok, not to be picky, but it's frou-frou. That word, like tonight's White House dinner, is Fraaaaaaiiiiinch!

But all of Twitter got kinda confused, because the state dinner menu is actually Southern food with French roots, AKA everything a good Southern man like Erick Erickson, born in East Feliciana Parish outside of Baton Rouge, should goddamn understand. The link Erickson provided -- not the link he wishes he provided, but more on that in a second -- describes the menu like this:

The menu will consist of three courses, which will include American dishes with French influences. The main course will be a rack of spring lamb with Carolina gold rice jambalaya.

LOUISIANA MAN CANNOT PRONOUNCE "JAMBALAYA"? Is he unfamiliar with the food, in general, or does he simply not recognize the word because he can't read? What about "gumbo"? WOULD "GUMBO" ALSO BE TOO HARD?

Or it that he cannot pronounce "lamb"? Now, we know that stray "b" could be a stinker if you're not good at words, so we here at Wonkette are here to instruct Erick Erickson that you should pronounce the "b" REALLY LOUDLY, like "buh!" and if you are worried your friends did not hear the "b" you should just keep saying "buh!" until you are sure they heard you.

Still confused, we went to the White House website to see what on earth Erickson was having a hard time pronouncing:

The main course will be a Rack of Spring Lamb and Carolina Gold Rice Jambalaya, which will be cooked in a New Orleans tradition and scented with the trinity of Cajun cooking—celery, peppers, and onions, and spiced with herbs from the South Lawn.

Dessert will be a Nectarine Tart infused with White House honey and accented by crème fraîche ice cream.

OK, so we have "greens." Then we have lamb and jambalaya, cooked with the Holy Trinity, and if Erick Erickson does not know what the hell the Holy Trinity is, the Louisiana department of records needs to delete his birth certificate, because LOUISIANA CARD REVOKED. And for dessert, some gay tart thing with crème fraîche ice cream. Sounds pretty good to us, and like something we might enjoy eating in a New Orleans restaurant, or a low country South Carolina restaurant -- in other words, any number of restaurants in Erick Erickson's damn neck of the woods.

Does he not know how to say crème fraîche? Was that maybe the confusing part?

After the entire internet made fun of him, Erickson insisted that he is not stupid and unfamiliar with the ways of "jambalaya" -- he made it this weekend! And crème fraîche ice cream also too!

So ... the jambalaya is OK, and he guesses he will have some ice cream. Just NO LAMB (too close to "goat" and those are for romance, allegedly) and DEFINITELY NO SALAD because YOU'RE NOT HIS MOM AND YOU CAN'T MAKE HIM. Is that his point?

Let's look at the second thing below the main course on the full menu, which he finally retweeted, in order to make it look like he wasn't a moron having trouble pronouncing "lamb":

This is all over a damn side dish? OK, well since Erick Erickson can't, let's Google "soubise" to see what it is, oh look, it's a nice onion sauce and it looks delicious. (In fact, bookmarking it!)

We guess it's acceptable for Erick Erickson, a simple man, to not know how to pronounce "burnt cipollini soubise," though we, a fellow southerner, will never ever understand mediocre white idiots who take it as a badge of pride that they cannot learn to say big confusing foreign words. (We also don't understand how those particular words are that damn hard for him to sound out.)

The point of this post is Erick Erickson doesn't know how to say "lamb."

It's like "luuuumBUH!" Honest! Wonkette would never lie to you, Erickson. OR WOULD WE?