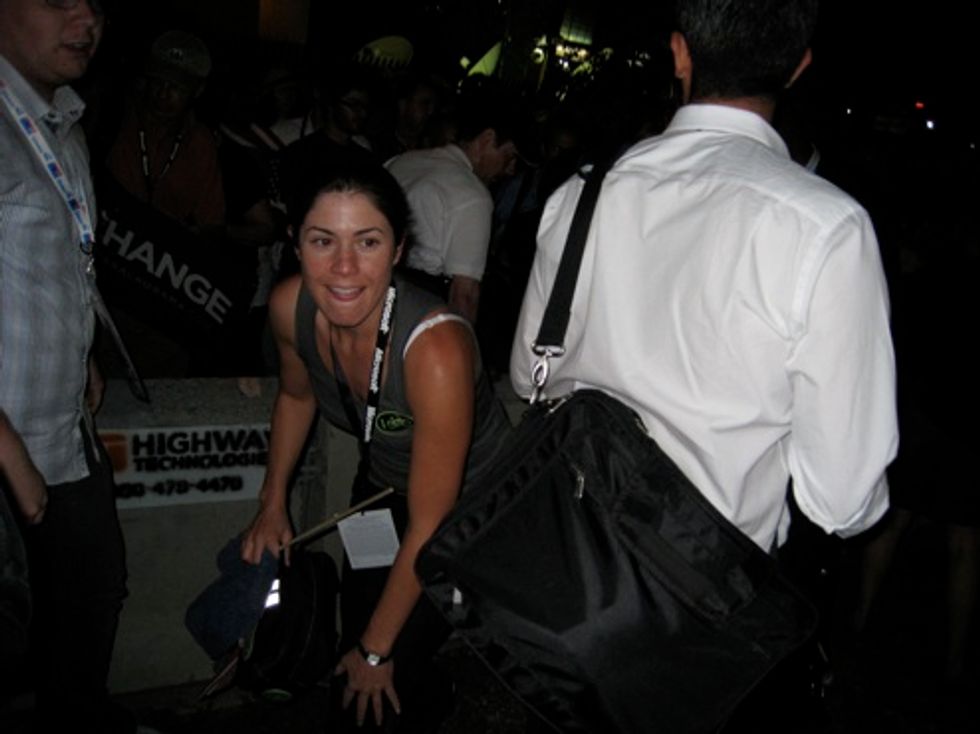 So after the four hours of sunstroke and no wireless and some enthusiastic dog-whistler deafening everyone in a 30-foot perimeter of his terrifying noises, we emerged from Invesco Field and began the four hundred-mile journey on foot through Mordor. This was seriously the most complicated, arduous exit from a public venue since a half-million people stampeded out of Wolf Blitzer's live sex show at the Republican National Convention in 1996. Follow us on a perilous journey past Jersey barriers, under abandoned bridges, through hobo encampments, and into the darkest reaches of the American id.

After staggering in lock-step with thousands of Hope Zombies, we were squozen into a funnel and led to a Jersey barrier that people were frantically hopping over. Here is some Live Camera Footage from that disgraceful event.

Look at this poor young woman, who lost a kidney getting over that fence.

Then we had to walk along what Newell referred to as "goblin trails," which ran in a shadowy netherworld under the streets of Denver.

We barely made it out alive.

Seriously, look at this shit. Those are spores of syphilis dancing in the air.

At last, downtown Denver loomed. A mere fourteen hours later, your editors made it back to their classy Town & Country, and then Ken almost ran over one of the many crazed midgets who are constantly attempting to fling themselves under the tires of oncoming vehicles here in Denver -- honestly, pedestrians have weird ideas about what the walk signal means or doesn't mean -- and then we stopped for vodka and Burger King and THE END, and now it is John McCain's birthday! Happy birthday John McCain!