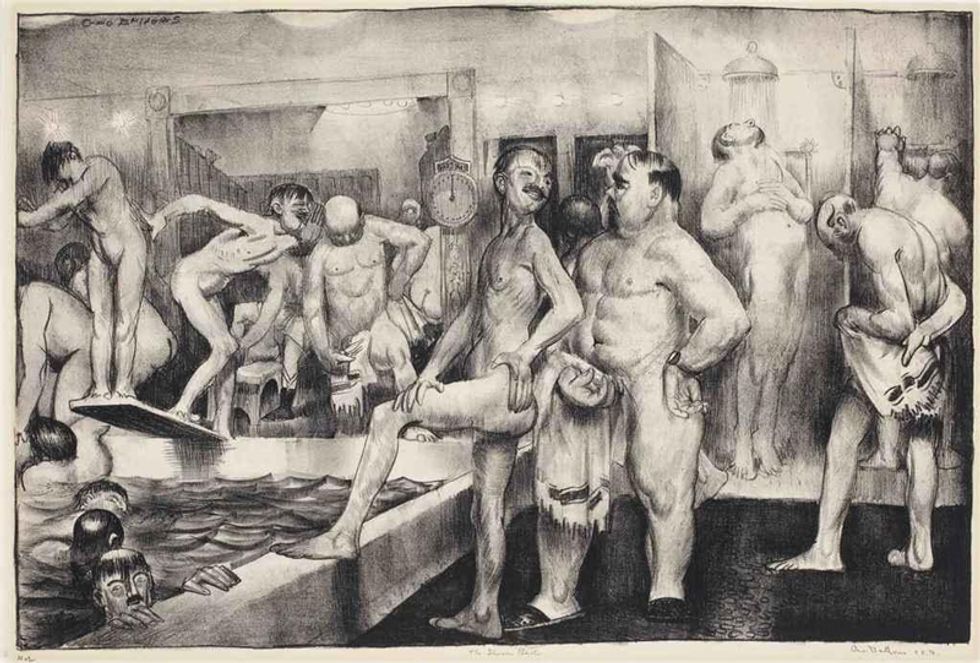 F'ball Season is almost upon us again, and so ESPN'sSportCenter sent reporter Josina Anderson to the Rams training camp -- which unaccountably is not in Los Angeles! -- to get the skinny on how Michael Sam (who is GAY) is adjusting to the pro game after college and how he's getting along with his new teammates. Naturally enough, she spent virtually all of the report detailing his showering practice, because for Christ's sake, we wouldn't be doing a f'ball training camp story otherwise.*

One teammate said that Sam (who is GAY) was just like any other rookie, listening and watching and learning all he can about the team and the league, and another had these important showering observations:

Another Rams defensive player told me that "Sam is respecting our space" and that, from his perspective, he seems to think that Michael Sam is waiting to kind of take a shower, as not to make his teammates feel uncomfortable...

This apparently was the hot scoop that turned the entire piece into the Michael Sam Shower Report:

... while [Kendall] Langford and linebacker Alec Ogletree told me that they didn’t know that specifically and also weren’t tracking that. Now while Langford told me, ‘Listen, I have not been in the shower at the same time as Michael Sam,’ he said that there definitely could be a million reasons as to why that is. He said he could be doing extra work on the practice field, he could be riding his bike, he could be doing extra cardio, but overall Langford said he seems to be adjusting to the life in the NFL and the speed of the game.

Oh yes, we are given to understand that Michael Sam also plays a sport of some kind, in addition to all that GAY naked time in the shower.

After Deadspin mocked the focus of the report, for some reason, ESPN issued a statement making clear that they only touched on the shower -- no, not in the shower -- because the f'ball players just couldn't stop talking about it:

“In response to recent questions about Michael Sam fitting in with the team, multiple Rams brought up the shower topic and we relayed that information as part of our reporting[.]"

ESPN also explained in a follow-up email to Talking Points Memo that the extended shower talk was but one part of a longer news segment, and would you all please stop being mean to ESPN for simply taking their reporting in a direction suggested by that one unidentified defensive -- very defensive -- player:

We did not sensationalize the reporting. It was the last part of a news segment -- not the headline or lead item in the report. … The player who answered our reporter’s question directly brought it up on his own -- she asked how Michael Sam is fitting in," the source said. "She did not ask a shower question. … Michael Sam wasn’t made available today for comment, so we didn’t have something directly from him on this."

The best comment on the f'ballfaraw came from Rams defensive end Chris Long, who (metaphorical f'ball verb goes here) the entire stupid nontroversy with this tweet:

As they say in F'ball, game, set, and match.