Everybody In Washington Wants A Date With FBI Director James Comey, AND HE ACCEPTS! 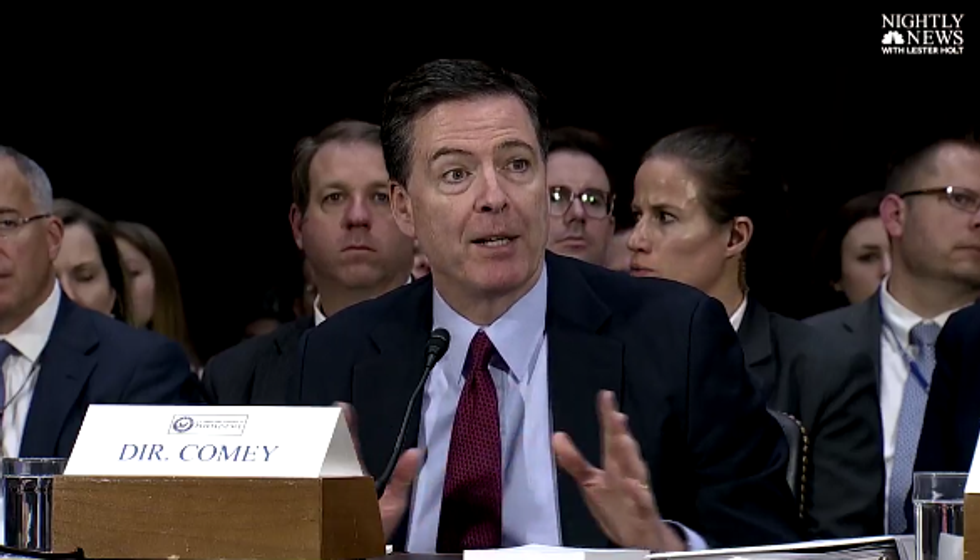 Several members of the Senate Judiciary Committee have been DEMANDING that FBI Director James Comey hightail his ass over and brief them on the FBI's investigations into Trump's connections to Russia, and even whether those FBI investigations actually exist, in advance of a hearing set for Wednesday by the Senate Judiciary Committee's subcommittee on crime and terrorism, which has oversight of the FBI. Senators Lindsey Graham (R) and Sheldon Whitehouse (D), the subcommittee's top Republican and Democrat, have been demanding SOME ANSWERS, MISTER, from FBI Director James Comey, to confirm whether or not the FBI is even doing an investigation into Donald Trump's ties with Russia.

Meanwhile, Chuck Grassley, the chairman of the full Judiciary Committee, has been threatening to deny deputy attorney general nominee Rod Rosenstein a confirmation vote if James Comey does not come. here. right. now! and give him a full briefing on the FBI's Trump Russia investigations. (Remember, since Attorney General Jefferson Beauregard Sessions has had to recuse himself from any investigations involving Trump and Russia, Rosenstein will, if confirmed, be in charge of overseeing them. You know, if they exist.)

But there's good news for these gentlemen, and it is that James Comey accepts their requests for a sexxxy date, and will brief the top ranking senators at Judiciary this afternoon! Hooray!

Sens. Chuck Grassley (R-Iowa) and Dianne Feinstein (D-Calif.), the committee's chairman and ranking member, respectively, told reporters separately that they are expecting to get a closed-door briefing later Wednesday.

"I've been told that I'll have a briefing this afternoon," Grassley told reporters when asked about reports that Comey was expected to clarify any investigation into ties between the Trump campaign and Russia by Wednesday.

Yay, Comey is doing his job!

You see, what is happening here is that as intelligence committees are starting investigations into Trump's Russia connections/collusion, the Judiciary Committee is doing what Politico calls a "parallel probe" into the FBI's role in all of this. So, they explain, it would help them a lot to know, FOR OFFICIAL, if the FBI is actually doing an investigation, so they don't step on any toes:

Fair enough! And the FBI does have some 'splaining to do about its activities investigating Trump and Russia, since we know for a fact it's been, at the very least, investigating Trump associates for a year now, and the agency was in possession of knowledge of Trumpers communicating with Russia before the election, at the same time Comey was putting the nation at Def-Con 4 because he heard a rumor that an FBI agent in some office (the New York office, probably, where that rogue group of Hillary-hatin' sleeper agents works, ALLEGEDLY) might have evidence that Hillary Clinton had checked her email recently.

But the Trump Russia thing is not the only reason senators want to see James Comey after class, under the bleachers, and also maybe they can meet up to "study" later, once mom and dad have gone to bed. If you'll remember, Graham and Whitehouse sent a letter to the Justice Department saying, "Hey, we know Donald Trump is just lying about Obama doing 'wire tapps' to him, but for the sake of humoring the gasbag, and so we can move on from this, please send us all the 'evidence' you have of that. LOL! Sincerely, Sheldon and Lindsey." (Slight paraphrase.) In response, the Justice Department has been stalling, because WTF, they do not have "evidence."

For the record, Pissy Lindsey Graham would like us all to know that, even though Comey is heading over for a briefing on the Russia thing, he and Sen. Whitehouse have not gotten a response to their letter on the "wire tapps":

"He hasn't answered that letter. If he doesn't answer it today I'm going to go to the chairman of the committee, Senator Grassley, and seek his support to subpoena," Graham said during a Fox News radio interview.

It's unclear if Comey ever pledged to respond to their letter by Wednesday.

Uh huh, we are sure Comey's FBI and the Justice Department will get RIGHT ON handing over whatever "evidence" they have (LOL) that Donald Trump got a "wire tapp" in his butt courtesy of Barack Obama, because we are so sure that "evidence" is a real thing that exists.

Anyway, we are very happy James Comey is doing his job and going to brief senators today, may they all live happily ever after and finish their various investigations -- Comey is testifying before the House Intelligence Committee this coming Monday! -- so that the "president" may go TO JAIL.

Wonkette is all reader-funded and shit. Click them buttons below to fund Wonkette!