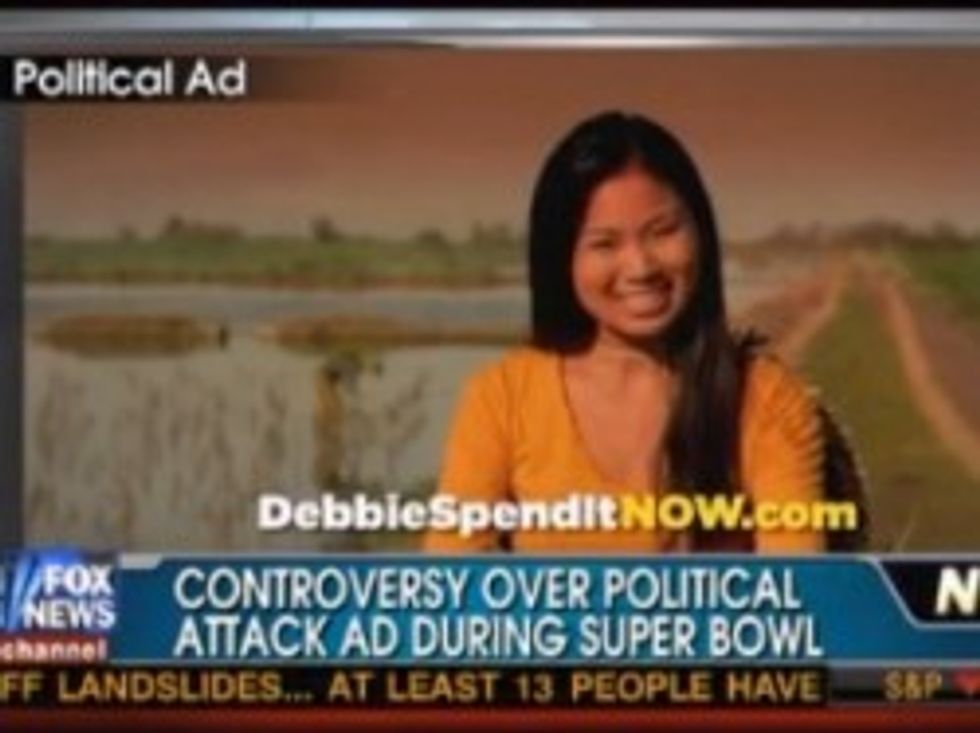 Last night, your editrix got home from her journalism class -- no, idiot twitterers, which sheteaches, not a remedial course she has been commanded to attend. It had been a really swell night. We'd asked our students to bring in examples of journalism that changed society, and a young woman brought in a documentary about Iran-Contra and the October Surprise and how Ronald Reagan committed treason by making a dealio with our BFFs Iran to keep the hostages just a little bit longer, if they'd be so kind. Also too, then we got to talk about Gary Webb and CIA crack! YOU CAN SEE WHY WE LOVE THIS CLASS! Well the first thing we did after checking to see how many posts Rich Abdill had written, was check in on Twitter. And there, before our eyes, was a twit about Michelle Malkin and ping-pong balls, and the author hoped to insulate himself from charges of racism by saying it was humor and pinning it on Yr Wonkette, as a "classic Wonkette reference!" Yay.

So we got to apologize. Personally. To Michelle Fucking Malkin. WHICH IS NOT OUR FAVORITE THING EVER IN THE WORLD TO HAVE TO DO.

So. Let us take off our caps lock and have a discussion in a normal, not-at-all-screaming-at-you voice, about why this is not funny and is not cute and is not welcome at Yr Wonkette.

Do you remember how disgusted you were at Progress Kentucky for being racist at Mitch McConnell's wife, Elaine Chao? You should, it was like two days ago. You were moaning and bitching and keening at the Derp of it all. And yet you think it is the height of wit to make jokes about an Asian woman being a prostitute who launches things from her twat. You guys! Guess what! That is even more racist than saying someone is colluding with China!

By a considerable degree!

It's not "ironic racism" just because the woman it's aimed at is a disingenuous malicious succubus. It's racism. You are being racist. Really racist. As racist as anything RTed by "Yes You're Racist." MORE RACIST. BY A LOT.

We've had this discussion before, but it apparently did not sink in. Forget it's Michelle Malkin. Imagine any other Asian woman in the world wandering into the comments and seeing that that's what we think of Asian women. She would probably leave. Don't you want Asian women ... to stay???

(Also, we've heard tell about the "Meet Asian Girlfriends" ad that pops up. We can't get rid of it until we know where it came from, so . -- We've got it, thanks. -- We don't need that shit here, and it officially joins any ads from the NRA as the only filthy money we will not accept.)

You have mostly laid off the Mann Coulter jokes, because we have trans friends in our comments, and it makes them Sad. Obviously, if they are our commenters, they are not, like, overly sensitive Jezebel-commenting grad-school-feminist trans folk (true story: we were accused of a "hate crime" on twitter by one of the wee-bit-batshit trans folk for mentioning offhand that women have vaginas). But "har-har the lady has a dick," over and over again, as the worst kind of putdown you could possibly offer, does not live up to our image of ourselves as Enlightened Defenders of Good and Nice-Time.

But you know why else you have mostly laid off the Mann Coulter jokes? Because it got so bad in the comments every time we wrote about her that we stopped. YOU ARE WHY WE CAN'T HAVE NICE THINGS.

Oh look, we are screaming at you again. Imagine that.

So cut the shit. It's not adorable. It's racist as fuck. And when you've handed Michelle Fucking Malkin the moral high ground, we cannot even explain the fury in our heart.

I had to personally apologize to Michelle Malkin, because someone mentioned our name.