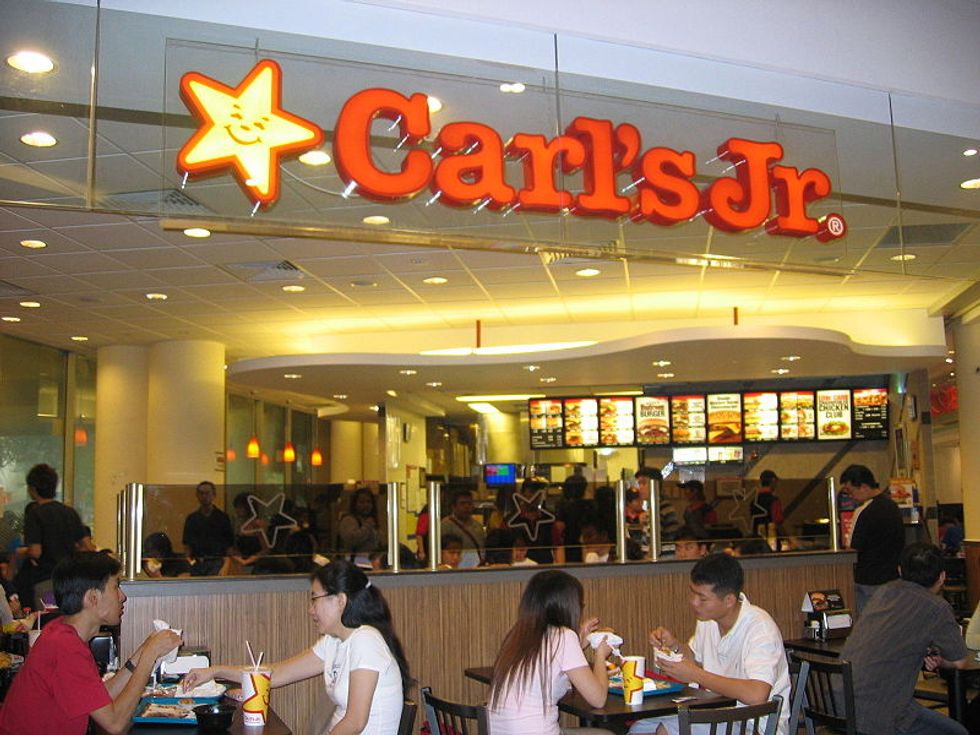 Are you ready to meet the most dickheaded CEO in the fast food game today? Well, tough noogies, you're going to anyway, because this a-hole deserves to be recognized.

One of the arguments opponents of a minimum wage hike LOOOOOOOOVE to bring up -- usually while leveling a smirk so smug and punchy, it'd give Ted Cruz pause -- is if fast food workers are paid a living wage, the industry will completely automate and they'll be out of a job and HOW DO YOU LIKE THEM APPLES?! Andy Puzder, CEO of CKE Restaurants (the parent company of Carl's Jr. and Hardee's), is at the forefront of this argument:

"I want to try it," CEO Andy Puzder told Business Insider of his automated restaurant plans. "We could have a restaurant that's focused on all-natural products and is much like an Eatsa, where you order on a kiosk, you pay with a credit or debit card, your order pops up, and you never see a person."

OK, so that's pretty shitty, but it also seems pretty standard for industry dickheads, right? Wait until you see where he takes it from there:

"They're always polite, they always upsell, they never take a vacation, they never show up late, there's never a slip-and-fall, or an age, sex, or race discrimination case," says Puzder of swapping employees for machines.

"LOL FUCK OUR WORKERS FOR ASSERTING THEIR BASIC HUMANITY, AMIRITE?! HEY, BOB, IS THIS YOUR COCAINE OR MINE?"

You might be noting that "Puzder" sounds like the noise an infected wound makes when you poke it with a cattle prod. Somehow, that is actually the least disgusting thing about this man. Leave aside that his signature achievement as Carl's Jr. shot-caller has been to preside over the "HEY LOOKIT DEM TITTIES and also we sell burgers, we think, maybe, we're not sure any more" era for the we'll-charitably-call-it-a-restaurant chain. The sort of stuff he says on the regular is SO much more horrifying.

Make no mistake, this is all a deliberate threat. Puzder, walking sack of pig smegma that he is, has a history of exactly this sort of asshattery, writing multiple op-eds for the Wall Street Journal against raising the minimum wage. In one of them, he managed to hit the Triple-Douche-Score of blaming the unemployed for their lack of work, railing against the siren call of government handouts, and threatening to slash his employees' salaries as a deliberate fuck you to President Obama. We're struggling to figure out ways Puzder could be more deliberately, pointlessly dickish short of forcing his employees to collect their meager salaries in pennies.

Here's the fun part, though: Writers (hi) and economists have already addressed the automation argument (and every other argument against raising the minimum wage) and explained why it is complete horseshit.

Plutocrats like Puzder (and their apologists) have this weird idea it's somehow ever going to be possible for restaurants to operate entirely on an automated system, as if that's something people actually want. Some automation is inevitable, sure. But the food industry is a different beast from, say, the automotive industry, and you're never, ever in a million years going to see a widespread trend of automated restaurants. A Robot Hardee's would never be anything more than a novelty attraction, no matter how many socks Andy Puzder fills with manchowder thinking about it.

And even if the technology could be harnessed (which, again, it can't), it's nowhere NEAR ready even at the most basic level. Machines and their upkeep aren't cheap, and certainly aren't cheaper than just paying workers a decent wage. Hell, a McDonald's in San Francisco tested a move to automated kiosks and actually wound up having to hire more workers.

Oh, and the argument that restaurants -- particularly fast food restaurants -- would be forced to close en masse because they can't keep up with costs in this new not-treating-your-workers-like-indentured-servants economy? Yeah, that's bullshit too. Contrary to the anti-facts you may have unwittingly absorbed, Seattle's $15 minimum wage has not caused mass restaurant closures. More germane here is that actual economists -- people who earned their positions through study and intellectual accomplishment rather than pure sociopathy and the deliberate victimization of those beneath them -- have done the math and come to the conclusion that a $15 minimum wage would barely have any effect on fast food prices.

So, y'know. Facts. Those are a thing.

Puzder wouldn't have to put any of his employees out of work under the new minimum wage, and automation wouldn't work (at least not any time soon), and he damn well knows it. Sure, under proposed minimum wage laws, he and his cohorts would have to settle for a yacht that ran on boring old gasoline rather than Guatemalan orphan tears, but we suspect they'd find a way to manage.