'Ex-Gay Pride' Rally Draws Crowd Of Ten, Makes Us Actually Sad For Them, Oh Well We Are Over It 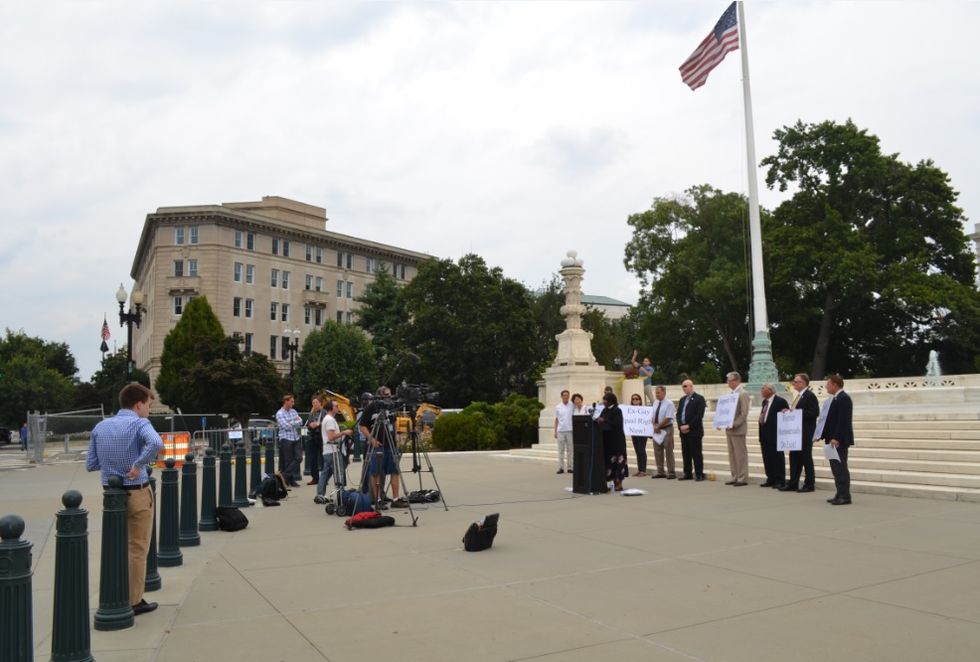 Despite its organizer's prediction that "thousands of ex-gays" would turn out for a protest in front of the Supreme Court, the big "Ex-Gay Pride Month" event Wednesdaydrew a whopping ten people. Yr Wonkette would like to apologize for our wildly inaccurate prediction that the event would attract "tens, possibly dozens" of attendees. There's just no excuse for optimistic exaggerations like that.

Or maybe event organizer Christopher Doyle is right, and the frightening power of Big Gay just scared everyone away? Two weeks ago, Doyle announced that he'd had to cancel a dinner and reception associated with the event due to threats of “anti-ex-gay extremism” that he never specified, but that were really really bad for reals -- a press release cited the 2012 shooting at the Family Research Council and "recent violence towards Christians at the Seattle Gay Pride Festival," but the dinner party seems mostly to have been threatened by disappointing RSVPs. Doyle had also billed Michele Bachmann and Jim Demint as speakers, but never actually confirmed their participation.

After the leader of Exodus International shut that group down in June and apologized for all the damage that group has done, Christopher Doyle has been trying to position his group, "Voice of the Voiceless," as the leading edge of the "ex-gay movement." VoV appears to be one of those things like the Catholic League where the "group" is one loud guy, a website, and a mailing list.

In an interview published in the Christian Post Wednesday, Doyle complained that the "ex-gay movement" is bein' repressed by the violence inherent in the system:

The homo-fascist oppression machine must have kicked into overdrive Wednesday, as RightWingWatch reports that the event was attended by fewer than ten people, which is just a pack of filthy lies, since we count ten people in that picture up at the top of this post. On his website, Doyle declared the event a huge success because even in the face of massive oppression, "nine former homosexuals (including an ex-transgender) and a half-dozen more allies" nevertheless showed up. Doyle also said that "anti-ex-gay extremists" only focus on the low turnout because they

want to make it seem like the only ex-gays who are vocal are a small group of profiteers that are fooling vulnerable individuals; in essence, they claim we are liars and charlatans that are misleading others.

Now where on earth would anyone get that idea?