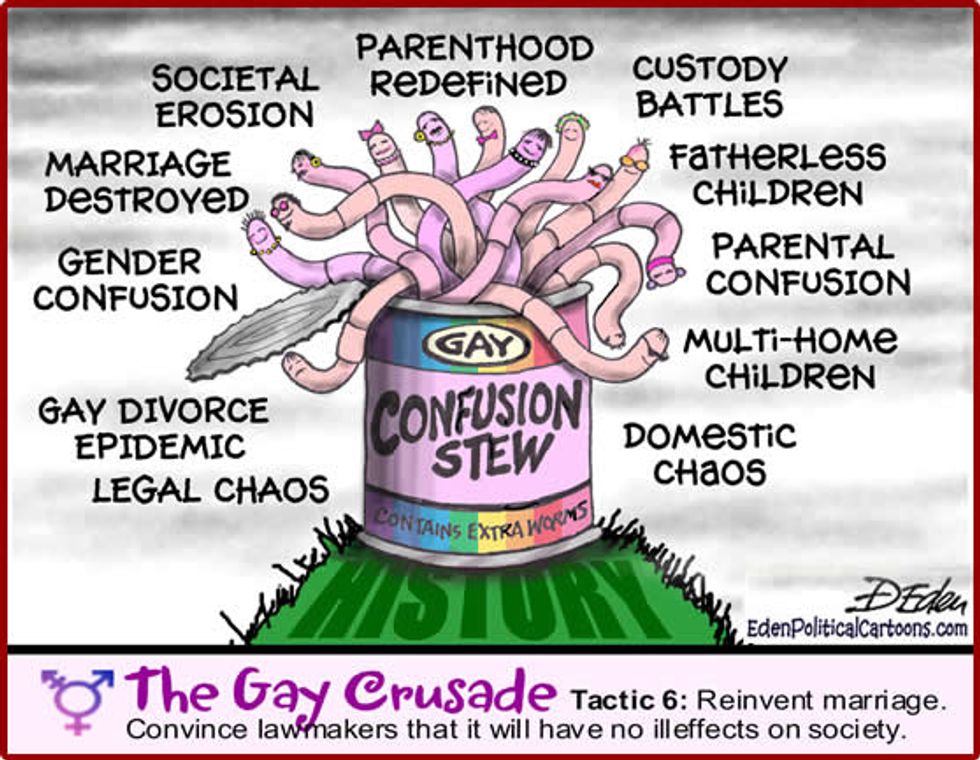 Here's a strange indicator that The Gays are moving closer to full marriage equality: In aNew York Times story, we learn that gay couples are now able to attain levels of relationship misery that had hitherto been reserved for straights. It is a dubious achievement, to be sure, but now some gay couples who break up can look forward to their children being caught up in one of the more tragic fringes of family law, international child abduction. And like so many other stories involving gay families, the issue is complicated because a number of the people involved are thoroughly convinced that Jesus is terribly angry about genitalia.

Welcome to the horrible sad story of Lisa A. Miller and Janet Jenkins, who met in at an AA meeting in 1997, entered into a civil union in Vermont in 2000, and had a daughter, Isabella, by in vitro fertilization in 2002:

they picked a donor with Ms. Jenkins’s green eyes. Isabella Ruth Miller-Jenkins was born in Virginia on April 16, 2002. Ms. Jenkins cut the umbilical cord as her own mother, Ruth, stood in the room....

Isabella learned to call Ms. Jenkins “Mama” and Ms. Miller “Mommy.” In these apparently happier days, Ms. Miller made an Easter card for Ms. Jenkins with Isabella’s handprints and the words, “Mamma I love you.”

Only Ms. Miller decided, on reflection, that she wasn't gay after all, because she became a born-again Christian, and obviously born-again Christians can't be lesbians, silly! So in 2003, when Isabella was 17 months old, Miller dissolved the civil union, moved to Virginia and taught at a Christian school affiliated with Jerry Falwell's Liberty University, and then, since she had hit the Reset Button on her life, she also redefined the woman with whom she'd had a child, and who Vermont law said was Isabella's other parent, as just an unfortunate side-effect of her "addiction to the gay lifestyle," and so she could be wished out of existence, or at least out of their daughter's life.

Miller ultimately refused to let Jenkins have court-ordered visits with Isabella (citing a visit during which Jenkins "traumatized" the child by taking a bath with her and also read the book "Heather Has Two Mommies" to her), so in 2009 a Vermont judge, tired of Miller's failure to comply with visitation orders, granted primary custody to Jenkins. Miller slipped Isabella across the border to Canada, caught a plane to Mexico, and they are now in hiding out in Nicaragua with the help of radical Mennonite fundamentalists, which is a three-word combination we had not imagined ourselves ever typing. Miller is being sought by the FBI and Interpol on charges of international child kidnapping, and one of the ministers who helped her leave the country, Kenneth L. Miller (who is not related to Lisa Miller), will go on trial in August in Vermont for his role in abetting the abduction.

The case has become a cause celebre for some fundamentalists, who portray it not as a custody case, but as the unwarranted persecution of a Christian woman who simply wanted to protect her daughter from the crazed homosexual with whom she used to also be a crazed homosexual before she got cured of that nonsense. The nice Christians at LifeSiteNews described the case in 2011 as a joint attempt by "homosexualists" and federal prosecutors "to take Isabella Miller away from her mother and give her to an unrelated lesbian." They also warn that recognizing the rights of gay parents

enables homosexual activists to oppress and persecute people who renounce homosexual perversion, with assistance of the FBI, which has effectively become — at least in the Jenkins-Miller case — a Gaystapo.

“What is at stake is the health and well-being of an intelligent, delightful, beautiful, 7-year-old Christian girl,” she wrote. Isabella “knows from her own reading of the Bible that marriage is between a man and a woman,” she wrote, “that she cannot have two mommies, that when I lived the homosexual lifestyle I sinned against God, and that unless Janet accepts Christ as her personal savior, she will not go to heaven.”

Religion sure does promote healthy families! The moral of this story may be, gay or straight, you should really think twice before having children with somebody you met at a 12-step meeting! We sincerely hope that young Isabella somehow manages to turn out even slightly normal after all she has been through.