ex-gaysExodus Internationalgayspt a lifetime of loneliness is its own reward

Exodus Int’l Admits It Can’t Cure Gays, Would Still Prefer They Not Have Gay Sex 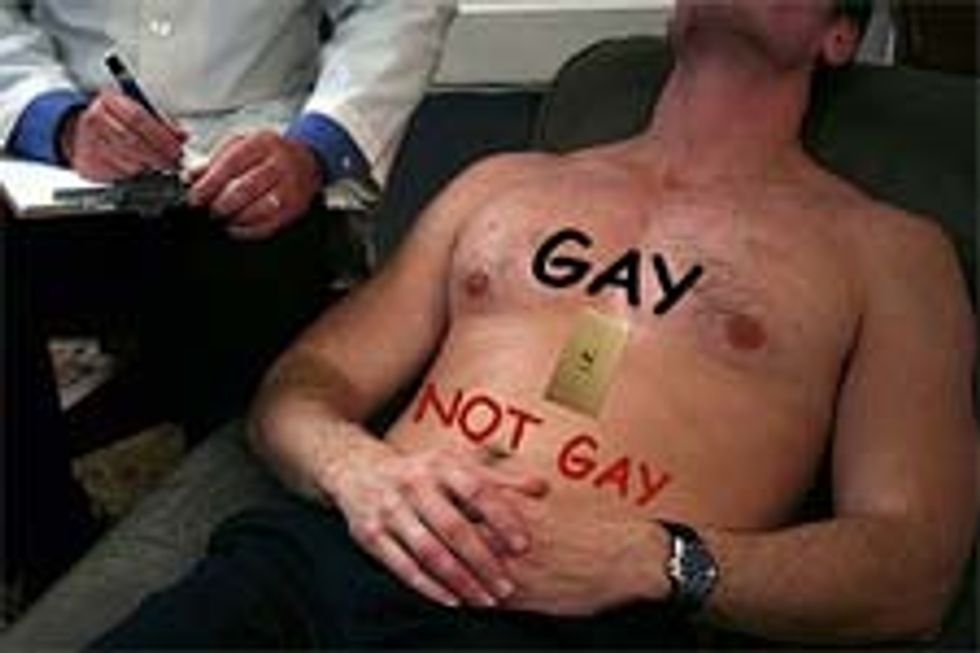 Exodus International is one of those ministries that promise to help people who are gay but are raised in a belief system that tells them that their desire for emotional and sexual fulfillment with someone of the same gender is wrong by helping them come to terms with their true feelings curing them of gayness. Oh, whoops, did we say "cure"? Because it turns out that Exodus is now saying that they can't cure your sweaty, unrepressible urges to have hot sexytimes with a dude (if you're a dude) or a lady (if you're a lady) and in fact it never could! This could explain a lot, like why two of the organization's cofounders ran off with each other in the '70s and got gay married. Find out after the jump if this epiphany has led them to have a more healthy and realistic attitude towards sexuality. (SPOILER: No.)

So Exodus is having its big annual get-together in Minnesota this week, just 600 or so folks chillin', maxin' and relaxin', and 100 percent not even once fucking anyone of the same gender as them. But have they had the desire to fuck people of same gender cured out of them, by Jesus? No, obviously not, what are you, stupid, that would be impossible!

The group's president, Alan Chambers, told The Associated Press on Tuesday that the conference would highlight his efforts to dissociate the group from the controversial practice usually called ex-gay, reparative or conversion therapy.

"I do not believe that cure is a word that is applicable to really any struggle, homosexuality included," said Chambers, who is married to a woman and has children, but speaks openly about his own sexual attraction to men. "For someone to put out a shingle and say, 'I can cure homosexuality' -- that to me is as bizarre as someone saying they can cure any other common temptation or struggle that anyone faces on Planet Earth."

So Chambers is saying that gays can only be cured in space, we guess? The saddest part about the "same-sex lustin' is just a temptation to be resisted, like other temptations" idea is that it seems to ignore certain realities. Like, for instance, stealing things is tempting to pretty much everyone (because it's nice to have things without needing to pay for them) but should be resisted (because it's not nice to take stuff away from other people). Whereas having sex with someone of the same gender is extremely tempting to some people and only mildly to not at all tempting to others, but should be resisted because, uh, really there is no reason, go on and do it already, Alan Chambers!

Oh, wait, what's that, you already got married, to a lady?

Chambers said the ministry's emphasis should be simply helping Christians who want to reconcile their own particular religious beliefs with sexual feelings they consider an affront to scripture. For some that might mean celibacy; for others, like Chambers, it meant finding an understanding opposite-sex partner.

"I consider myself fortunate to be in the best marriage I know," Chambers said. "It's an amazing thing, yet I do have same-sex attractions. Those things don't overwhelm me or my marriage; they are something that informs me like any other struggle I might bring to the table."

If you are married and know Alan Chambers, you are basically an embarrassment to married people everywhere. What on earth are you telling him about what marriage is like? Do you tell him that your every day is filled with dread at the prospect that you might have to touch your naughty bits to those of your opposite-sex spouse, that the monthly ritual will once again end in weeping and shame? Do you think you're making him feel better, by telling him, this? Well, you're not, understand? You're not.

Anyway, we urge Minnesota-area readers to scour the local M4M Craigslist ads or just hang out in the men's room at the airport, for comedy. Also, we present without comment the following Google ad that we found embedded in the AP story: