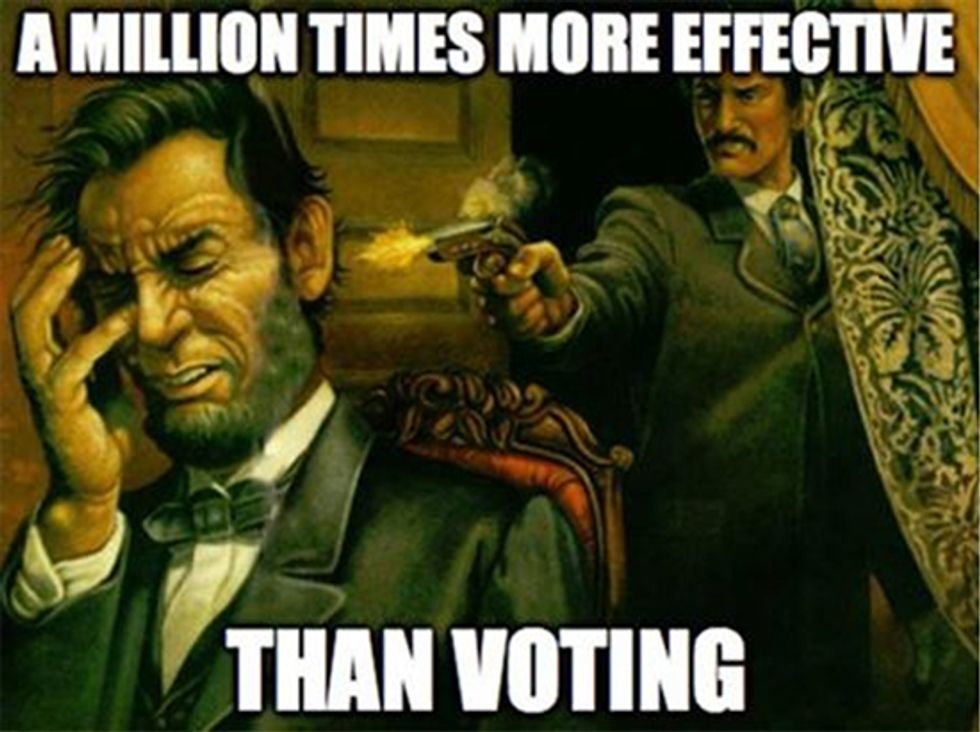 From the Coalition to Stop Gun Violence Facebook page comes the above screenshot of a cheerful Election Day message from a pro-gun, pro-insurrection Facebook thing. The Facebook group is still up, though they've removed the image and the accompanying text, which read:

Today is election day. I will not be participating in the scam anymore. When you vote, you continue to acknowledge that the government has a right to rule over you. I really don't care if anti-gunners win the election because if they do and they manage to pass laws, around 5% of the people will follow them and they won't be enforced. The founding fathers created the second amendment because they knew that using guns was the only way to bring down a tyrannical government, and that voting was completely useless. Sic Semper Tyrannis

We're not sure we agree with him a hundred percent on his history work there, seeing as how the Holy Second Amendment was added to a Constitution that already contained more than a few words about voting and elections, and not a single word about the appropriate circumstances for blowing the brains out of a president.

After people started complaining, the We Heart Guns 'n' Assassinating Tyrants guy -- don't call him a conservative or a right-winger, he's a Libertarian -- explained that some people, including his own fellow patriots,  just weren't getting his point, because they are too stupid to understand history, and also big hypocrites:

Why is that when I post stuff about the American revolutionaries using guns to get freedom it's all positive feedback, but when I post something about John Wilkes Booth using a gun to defend freedom everyone freaks out?

After the post was highlighted by several other Facebook users, the guy pulled it down and temporarily unpublished his Facebook page, but soon came back, with an explanation of his own wonderful politics (anarchist/libertarian) and his insistence that he's totally for freedom, because he supports gay rights, no taxes for anyone ever, and doesn't even hate Muslims for being terrorists, as long as Muslims also support the right to bear arms.

As for the silly notion that his post praising the efficiency of shooting a president in the head was advocating shooting presidents in the head, well, you're just plain wrong, you sheeple. And you'll never guess who -- besides John Wilkes Booth, PBUH -- his bestest hero is!

When it comes to wanting a revolution / civil war. I hope that it doesn't come to that. I am hoping that the government dissolves on its own. When no one participates, it can't sustain any longer. Thankfully, we have the second amendment so that we can use it as a last resort. An example of this is Cliven Bundy. He tried to resolve the situation with the government peacefully and they wouldn't leave him alone. Finally, after years of this when the government wouldn't stop bullying him, supporters rushed to his defense. No one there wanted bloodshed. If they did, they would have opened fire on the agents. They just knew that they had guns as a last resort.

Shorter wingnut: If you have a gun, you can be free on your own land, even if it's not actually your land. 'Merca!