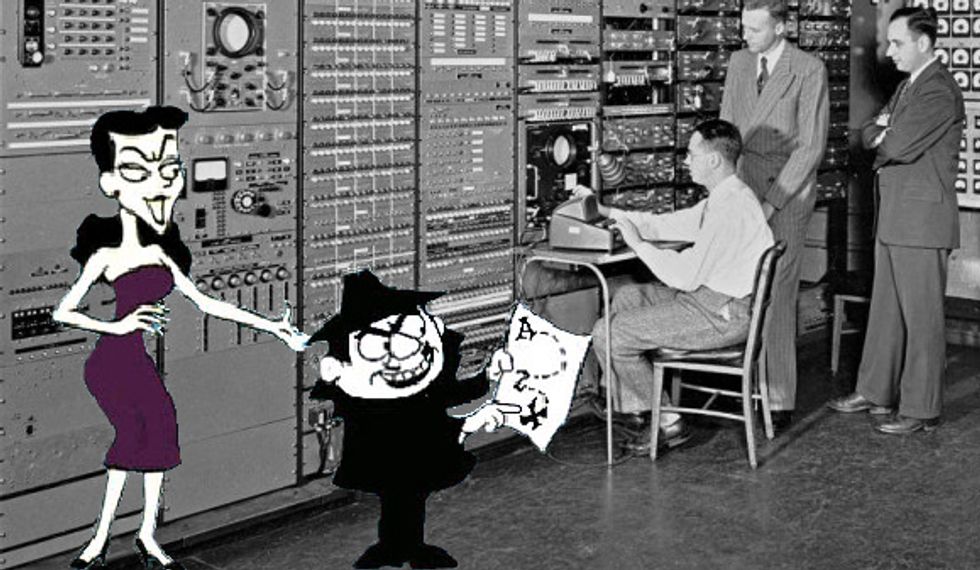 After we hack election, Natasha, we sell CBS pilot for 'Young Sheldon'!

Congress is using several hearings this week to yell at lawyers for tech giants Facebook, Google, and Twitter about how Russia used their platforms to muck around in the 2016 election, and to find out what the companies have done to prevent foreign interference in future elections. Turns out the answer to that latter question is they're working really hard on the problem, you betcha. Just as soon as they figure out the ruble to dollar exchange rate. (That's a low joke -- they already have an app do do that.)

At least now all three companies admit -- a bit reluctantly -- they didn't do the best job last time out. In Wednesday's hearing of the Senate Intelligence Committee, Oregon Democrat Ron Wyden asked each of the company reps for a simple yes-or-no answer (a tactic that we've always thought hokey, frankly, but we are not a senator) to the question, “Are you satisfied with your platform's response to foreign interference in the 2016 election?”

“We are constantly doing better,” he replied. Pressed by Wyden, he said, “We could have done more.”

Twitter's acting general counsel, Sean Edgett, was more direct. “No, we need to do more,” he answered.

How Is Facebook Breaking America For Trump And Russia Today?

HOW IS IT NOT?

So that's progress, of a sort, from how Mark Zuckerberg initially said it was "crazy" to think maybe Russia used Facebook to affect the outcome of the election, and told Barack Obama there were hardly any Russian messages on Facebook at all, tovarich.

As it turns out, the problem was a bit more widespread than just a few memes with adorable kittycats asking "I can haz repeal of Magnitsky Act?" Facebook's prepared testimony for Tuesday's hearing by the Senate Judiciary Committee explained that between January 2015 and August 2017, content originating on Russia-connected pages had been served to 126 million people, and most of that exposure was thanks to how social networking works:

Of that, 29 million people saw it because they had liked one of the Russia-linked pages that Facebook has subsequently removed. The rest saw the posts after they spread organically thanks to likes, comments, and shares that propelled them forward virally. [...]

It's starting to look like Facebook's complicity in helping Russia get Trump elected is VAST.

More than one senator was less than assured that the companies have done everything possible to get their act together. In the first of the hearings, on Tuesday in the Judiciary Committee, Al Franken still thinks it's kind of a big deal that Facebook blithely took rubles as payment when it sold political ads to the "Internet Research Agency" troll farm. He asked whether that was a clue that a foreign government might be trying to influence American politics:

“How did Facebook, which prides itself on being able to process billions of data points and instantly transform them in the personal connections with its user, somehow not make the connection that electoral ads, paid for in rubles, were coming from Russia?”

Franken called on Facebook to reject the use of foreign currencies to buy political ads. But Stretch demurred. “It’s relatively easy for bad actors to switch currencies,” Stretch said. “So it’s a signal, but not enough.”

At Wednesday's Intelligence Committee hearing, Democratic Vice Chair Mark Warner was less than impressed with the companies' progress even in identifying what happened last year, let alone their steps to prevent future interference:

“I still find it very disturbing that it appears, at least from Twitter and Facebook, that the sense is that all the Russian active measures only originated with one single troll farm in St. Petersburg,” Warner said. “It still appears that most of the work that you’ve provided us is still derivative of your initial reports.

“I was hoping very much that you would come in today and either say ‘that was absolutely all of it’ or ‘we’ve identified other troll farms or other entities.’” [...]

“You’ve identified 470 accounts from one troll farm in St. Petersburg. There have been plenty of press reports of other troll farms in Russia,” Warner said.

None of the companies could say they had yet discovered the full extent of Russian use of their services in 2016, but assured Warner they're definitely still working on that.

Warner also wanted to know how it is that Facebook bragged about taking down 30,000 troll accounts in the French election, but only 470 in the American one, and asked whether the company had cross-checked the deleted Russian troll accounts from the French election to see if any American accounts were just Franco-Russian skunks trying to romance squirming American voters who didn't want anything to do with their stinky affections. Facebook's lawyer, Colin Stretch, told Warner he didn't know and would have to get back to him, at which point Warner reminded Stretch that Facebook knew when the hearing was scheduled, and that this would probably be on the test. A bit later, Facebook's Chief Security Officer Alex Stamos posted a clarification to Twitter, which seems awfully ecumenical of him:

So 1) they're working on it and B) they tried that thing Warner asked about, good for them, though Russia uses different troll accounts for different countries. Note also that Stamos didn't quite address why Facebook could find 30,000 troll accounts aimed at France, but only 470 aimed at us. Maybe Russia just thinks France is more fun to fuck with?

Also, California Democrat Kamala Harris wanted to know how much money the companies made off legitimate advertising that ran alongside troll-generated content, and all three lawyers said their companies hadn't actually done that kind of analysis. Harris wasn't buying it:

“I find that difficult to understand because it would seem to me that we would figure out how much you've profited from Russian propaganda on your platforms,” Harris said.

So rest assured, America -- the big tech companies may know everything about you they need to microtarget you for advertising, and while they're still a bit unclear on exactly how widespread Russia fuckery with the 2016 election went, they're definitely working on it, and should have their analysis of what went wrong in 2016 finished sometime after Russian trolls help get Donald Trump reelected. Look, here's a Taco Bell coupon for you to print out, if that'll make you feel any better.