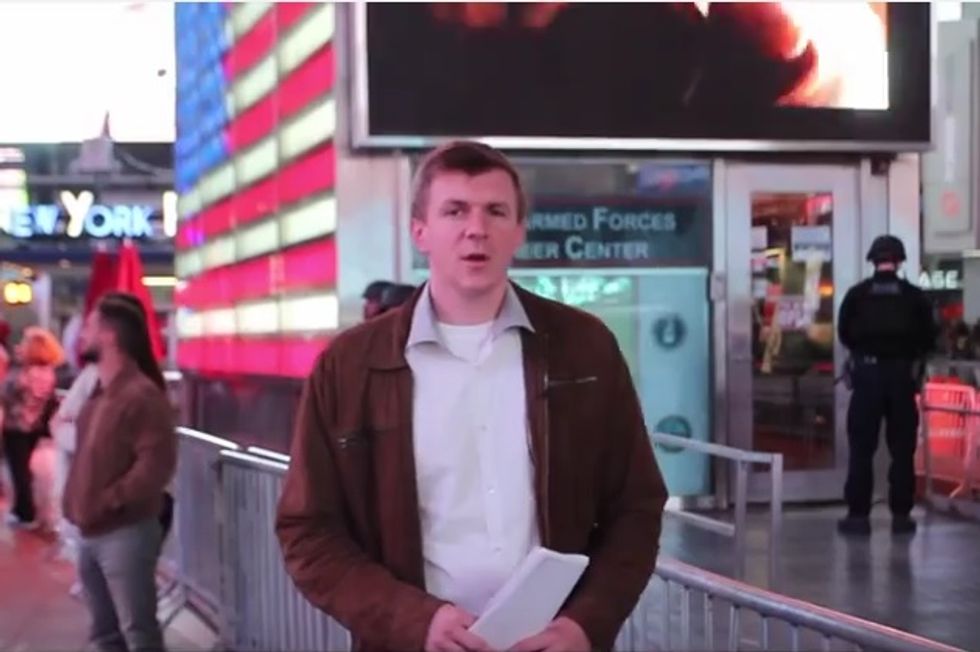 Look! It's Times Square! Where the terrorists are, almost certainly, maybe.

James O'Keefe, rightwing media's thrift-store Leni Reifenstahl, has a brand new Shocking Terrifying Video that should strike fear into the hearts of every easily frightened American who's certain Syrian refugee hordes are on the verge of raising the ISIS flag over the White House, unless Barack Obama beats them to it. In his latest (yawn) shocker, a video crew from O'Keefe's "Project Veritas" talks to three Syrian refugee men in Greece, who tell the "reporter" that it's pretty easy to get a fake Syrian passport. Somehow, this is supposed to prove Syrian refugees are dangerous.

The bestest, scariest part of the video comes 40 seconds in, with James O'Keefe standing in Times Square -- to remind us that NOWHERE IS SAFE, or maybe it's just that O'Keefe's immigration problems kept him in the USA -- where he solemnly explains:

The recent terrorist attacks in Paris confirmed our worst fear: that people posing as innocent refugees were actually terrorists, with a mission...to kill!

Except for the part where we know nothing of the sort. All the identified terrorists were French or Belgian citizens. One as-yet unidentified attacker's fingerprints match those of someone who registered in Greece as a refugee in October; a forged Syrian passport with the name "Ahmad al Mohammad" was found near the remains of that suicide bomber's body outside the Stade de France. And even he may have been European:

Federica Mogherini, the EU's chief diplomat, said all the attackers are believed to be EU citizens, however, raising the possibility the man was using the fake passport to re-enter Europe, possibly because his real identity was on a watch list.

Most of these details aren't mentioned in O'Keefe's video.

As is always the case, there's not much to O'Keefe's "exposé." The Veritas "reporter" talks to the three men about passports; in a voiceover, O'Keefe says the men claimed they were headed for "Northern Europe and America," although we don't actually hear the men mention the U.S. The guys talk about having reached Greece by rubber raft, and about trying to get to Germany, possibly using fake passports. O'Keefe very seriously intones:

They told our journalist that their passports were real, but we had no idea if that was true. They did tell us that one way they thought they could get into the U.S. or further into Europe was with fake passports.

Once again, we're left to take congenital liar James O'Keefe's word for it. You'd think that video of a Syrian boasting about his plans to enter the U.S. with a fake passport would be really hot stuff, but O'Keefe didn't include that part. (Maybe it'll be in the Special Edition, where Hamid shoots first.)

Asked how to get a fake passport, one guy explains it's no biggie:

The reporter asks if "that's how a lot of people from Syria come to the States?" And the guy says "Yes." There you go, ladies and gents, absolute proof that some guy in Greece said that he thinks that happens a lot. Surely that invalidates the State Department's claims that it has an extensive vetting process for refugees, doesn't it?

So what have we learned about the danger posed to Americans by Syrian refugees? Precisely squat. It's hardly a scoop that counterfeit passports are easily obtained in some parts of Europe; Middle East Eye reported the same thing two days after the Paris attacks, noting:

Fake Syrian passports have become a valuable commodity in recent months and are freely traded on the black market, as they can help ease the path for non-Syrians to get protection as refugees in Europe.

Not all the fake passports are being purchased for nefarious purposes, either:

Fake Syrian passports are also bought by Syrians who have not been able to get documents due to the war.

Chris Doyle, head of the Council for Arab-British Understanding, said there is great demand for fake passports because many Syrians living outside government-controlled areas are rendered effectively stateless by the difficulty of obtaining documents.

And at the risk of bending Godwin's Law here, we should note that issuing illegitimate passports -- passing off Hungarian Jews as Swiss citizens -- was the chief method used by Raoul Wallenberg to rescue tens of thousands of Jews from Nazi-occupied Hungary; similarly, British agent Francis Foley used not-quite-legal visa stamps to help thousands of Jews out of Germany. While Syrians sneaking into Europe aren't quite equivalent to Jews escaping Hitler, a fake passport isn't necessarily proof of anything more devious than a desire to get the hell out of a terrible place.

Project Veritas didn't wring a confession out of the three Syrians who might have been secret ISIS operatives; we're more inclined to agree with the cynical Breitbart commenter who speculated that the Syrian dudes were hoping to get the "reporter's" phone number. Sure, baby, lots of fake passports. What you doing later?

The biggest problem for anyone wanting to use this O'Keefe video as evidence that the U.S. will soon be awash in Syrians is that most refugees being considered for U.S. resettlement aren't coming from Europe. The 10,000 Syrians the U.S. expects to admit must first be recommended by the UN High Commission for Refugees, which is mostly working with refugees in camps in Jordan and Lebanon. Not that trivial details like that matter much -- they're foreign, they're Muslim, and one guy in the Paris attack may have had a fake Syrian passport, so to be on the safe side, let's just freak out and leave real Syrians to rot in overcrowded camps. Where they can grow to hate America, for all its talk of freedom and its behavior to the contrary.