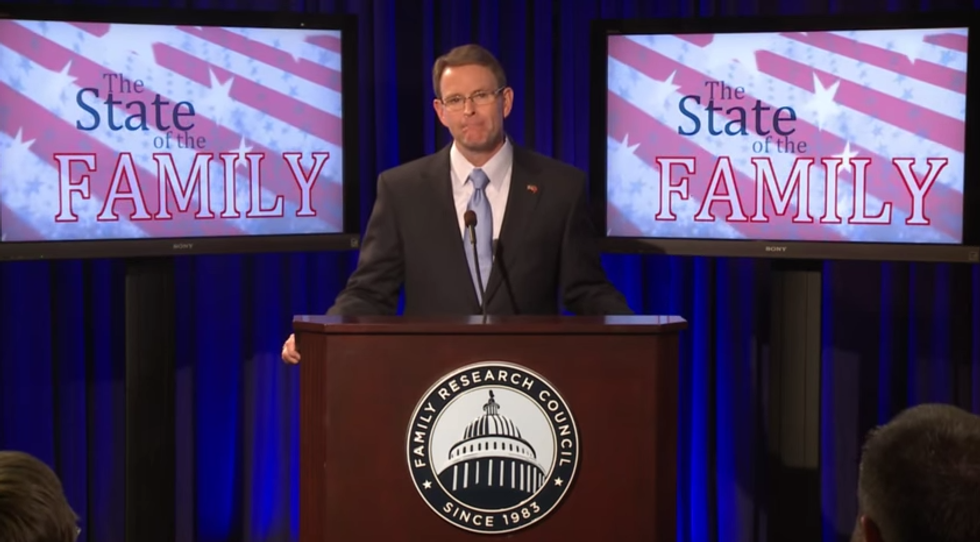 Here's a fun fact: Only the president of the United States is required to report, from time to time, on the state of the union. No, really, it is true. And a fact!

But you wouldn't know it from all the Me Too! "responses" from the Republican Party, the Tea Party Express, and Rand Paul's YouTube:

So we are not at all surprised that Family Research Council President Tony Perkins also felt the need, on Monday night, to weigh in on the state of our union, just in case you wondering about his opinion, which of course you were not. And, again, the Constitution does not require him to do so. In fact, we are pretty certain the founders, including the one who wrote his own version of the Bible, would be rolling their eyes pretty damned hard right about now and probably shouting "THAT'S NOT WHAT WE MEANT BY RELIGIOUS LIBERTY, YOU DOLT!"

The Family Research Council is Very Concerned about religious liberty, which is always under threat from The Gays, The Womenfolk, The Liberals, The Activist Judges, The Scientists, The President Obama, and The Everything Else They Don't Like. Whineth Perkins:

And the issue that weighs especially on my heart tonight is that of religious liberty. The freedom of every American, that they have been endowed with this liberty by their creator, to acknowledge the divine author of our liberties, and to live in accordance to his precepts as we understand them.

Tonight in the United States of America, the consensus about religious liberty that we have long enjoyed is being chipped away at with each rap of the gavel of an activist judge or a human rights tribunal.

Does he cry about how Obamacare forces poor oppressed straight white Bible-humpers like him to pay for abortions, even though that is completely untrue? Yes, of course he does. Does he cry harder about poor oppressed straight white Bible-humpers who are forced to bake gay cakes for gays? Yup. Does he invoke Martin Luther King Jr., who would no doubt be marching arm-n-arm with him, in a not-gay way? Obviously. Does he talk about the "dignity" of human life while also railing against The Homosexican Agenda? Duh. Does he toss in some boo-hooing about communism? Naturally. Does he call upon U.S. Americans to join in a big ol' hetero group hug "all as one in Christ Jesus," just like it says in the First Amendment? You know the answer.

Also, he hates Obama. And taxes. And radical Muslims. And pornography. And something something blah blah blah about protecting the sacred "doctor-patient" relationship by telling ladies just what kind of health care is right for them. (None.)

You can watch the whole thing if you hate yourself that much. Or you can just join us at 9 PM Eastern as we liveblog the only State of the Union address that actually matters.