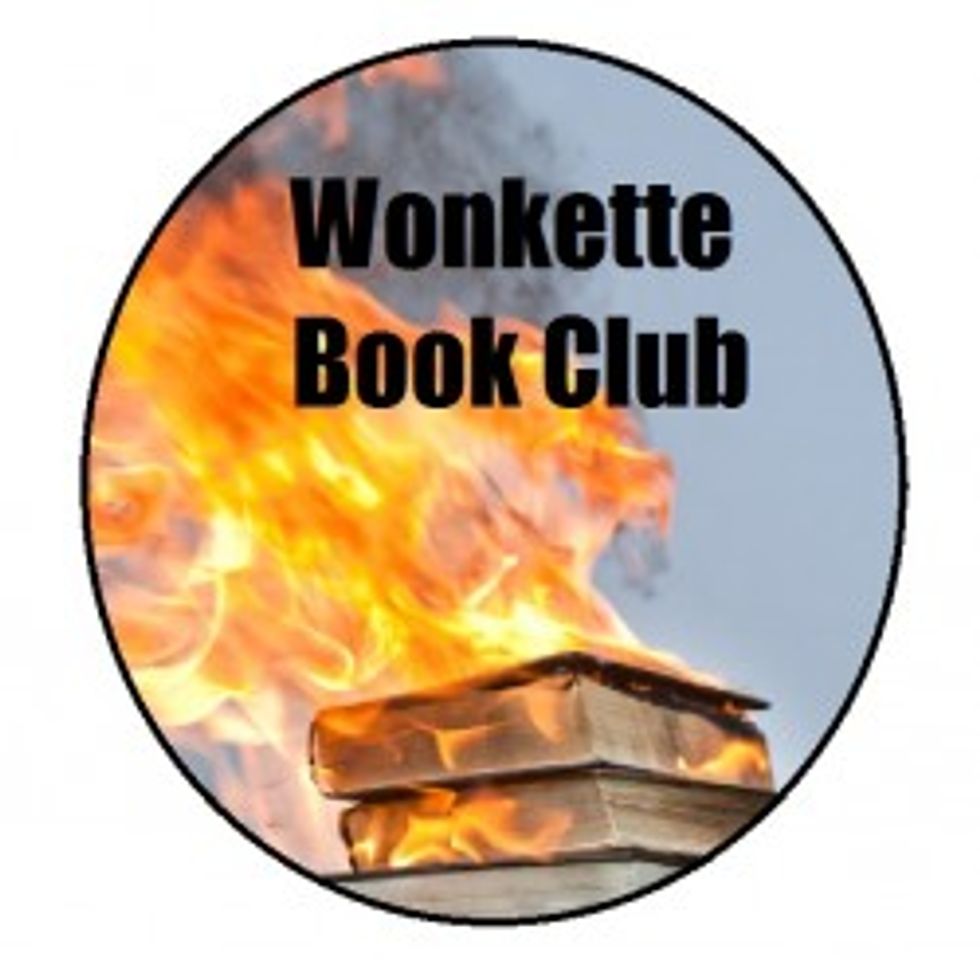 Ayn Rand Nation: The Hidden Struggle for America's Soul, by Gary Weiss, is a good read even if you are fully, horribly aware that Rand's fevered visions of utopian feudalist capitalism are even now being advanced as mainstream "principled" conservative economic thinking. (This would be OK if "Another French Revolution!" was the mainstream left-liberal position.) It's good because it takes us through the looking glass to meet actual people who have been influenced by Rand -- some powerful, others obscure; some true believers, others who just think that "Who Is John Galt?" is a cool thing to write on the t-shirt they wear when they're yelling about taxes. It's good because it's written in a conversational voice, one that says "Between you and me, I don't get these people either, but let's explore them together." It's good because yr favorite Wonkette mommyblog is name-checked on page 108.

We remember that! A serial-vomiting Ayn Rand, classic stuff!

Another reason this book is good and should be purchased is that it devotes a lot of words to Alan Greenspan and how he is among the most brilliant and consequential simpleton sycophant stooges in living memory. Yes, a brilliant simpleton: it seems impossible, but how else to explain Greenspan's argument against (for example) building codes, as quoted by Weiss:

"It becomes cheaper to bribe the building inspector than to meet his standards of construction. A fly-by-night securities operator can quickly meet the SEC requirements, gain the inference of respectability, and proceed to fleece the public."

Indeed, Greenspan unshakably believed that, absent government regulation of capital markets, fraud would be less common because traders would need to build up solid reputations before they were trusted with consequential deals. This is because Alan Greenspan has a poor grasp of human nature.

All this is relevant because Greenspan was extremely close to Rand. How close? He was one of four Rand acolytes to sign a letter essentially kicking two people out of the Objectivist tree house, one of whom was excommunicated because he wanted to stop sleeping with Ayn Rand, the other because she was that dude's wife. Sordid!

Perhaps the scariest thing we learned from this book is that millions of copies of Ayn Rand's novels have already been sent free of charge to American schoolteachers, to be taught alongside other boring stuff. This raises the chicken-or-egg question of whether a certain number of people are just destined to misapprehend the nature of reality, or whether otherwise normal and intelligent children can be warped by bad ideas couched in clunking prose. We aren't looking forward to the answer.

This book ably identifies many of the factors that make Ayn Rand's peculiar philosophies more consequential now than ever: They appeal to popular notions of individualism and self-reliance; they purport to answer economic questions that resonate in post-Recession America; and it's in the interests of extremely wealthy people to spend some of their money convincing less-rich people that Any Rand was right. However, it doesn't note the central irony that so many people are mentally able to assume they'd be fine without a government precisely because government does a pretty good job of protecting them in subtle, unobtrusive ways, so they're like "I can take care of myself, look ma no hands!" The book approaches this point but doesn't quite get there. And while Ayn Rand Nation astutely notes that Rand's philosophies are ascendant because they frame economic questions in simple, moral terms, in yr Wonkette's opinion Weiss could have done more to lay out appropriate arguments on the other side.

Like here's one: Rand "powerfully" argues that we have the rights to enjoy the fruits of our labor and to enter freely into contracts with other individuals, therefore any money taken from us in taxes and given to another against our will is essentially theft and not morally permissible. We would argue that of course you have those rights, knock yourself out enjoying the painting you did with your labor, or the vegetables you grew in your garden, or the awesome dental work you did to yourself because you're a lunatic. And do contract with your neighbor to mow her lawn in exchange for a delicious pie. But if you want to use the U.S. dollar, there are some rules! One of those rules is you have to contribute something to U.S. America, where we make the U.S. dollar, and we make it a stable and valuable thing to have. Did you yourself make the dollar? You did not, so get over it.

Briefly, here's another argument against Rand you don't hear too often, and which Ayn Rand Nation fails to make: Her ideas would be great if nobody ever died. If we were all immortal, you betcha we'd want to be law-abiding, moral people whose "rational self-interest" guides us to do only good stuff that doesn't hurt anyone else. But because we die, we can make the calculation that we only have to "get away with it" for a few years until we can retire to our fortified compounds with all the ermine and panda tooth underwear we could ever want. Then we pass our fortunes to our feckless children and freedom weeps tears of joy forever after.

In conclusion, Ayn Rand Nation: The Hidden Struggle for America's Soul, by Gary Weiss, is a good book!