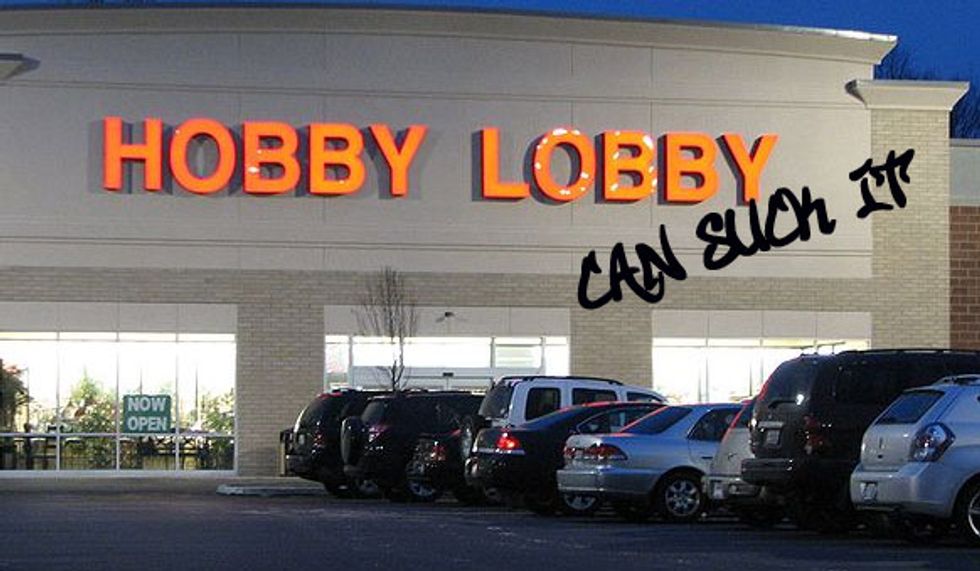 We have TOLD YOU that one of the Supreme Court's shittiest decisions ever, the one what said Hobby Lobby is a person with "religious freedom," and thus can deny its employees healthcare because they think Obamacare makes Jesus sob about abortion, would eventually extend to allowing all kinds of other discrimination in the name of butthurt "religious freedom." (The dissenters in that case said so too!) And it has officially happened! A federal judge in Michigan has ruled that, because of that decision, it's A-OK and hunky dory to discriminate against transgender folks:

While the ruling involved a dispute over a transgender employee, the logic could apply to any type of gender or race discrimination a company says is motivated by religious views, lawyers tracking the case said.

Cox said the 1993 Religious Freedom Restoration Act, as interpreted by the justices in Hobby Lobby, meant that the sincere religious beliefs of closely held companies like RG & GR had to be respected unless the government could show a need to advance a compelling interest and that letting Stephens wear women's attire would have the least impact on the religious views of the company's management.

FUCK the Religious Freedom Restoration Act, FUCK Hobby Lobby, and FUCK the pissant judge who was just waiting for something like this to come along so he could help bigots discriminate against people they think are gross. Guess who appointed that judge? If you guessed "Dubya," put a gold sticker on your face and run around yelling "I am the World's Best Dad!" or whatever you yell when you win things. This is why it matters who is president.

Funny thing, though. Remember last year when a DIFFERENT judge in another state ruled that Hobby Lobby, specifically, couldn't discriminate against transgender employees? That was an administrative law judge in Illinois, though, and not some hot-to-trot federal Dubya appointee like Sean Cox, so it was probably totally different.

This case was brought by the Equal Opportunity Employment Commission -- which has consistently said this kind of discrimination is against the law -- and the ACLU filed an amicus brief as well. The good news is that the ACLU is pretty sure a higher court will tell Judge Cox to fuck off and inhale a gunny sack full of dogshit:

American Civil Liberties Union attorney Josh Block, whose group filed an amicus brief on the EEOC's side, said the implications of the ruling were troubling but he expects it will be overturned by a higher court.

"It would mean any religious employer would suddenly have a defense to firing someone in violation of any civil rights law as long as it was based on religious belief. … It's a very odd decision, and there are a million different ways it can and should be reversed," Block said.

We sure hope he is right! In the meantime, we can just smell the religious fundamentalists, with all their newfangled religious freedom bullshit laws, just chomping at the bit to get more judges to tell them they can gay-bash and transgender-bash and do all kinds of other fun racism and sexism, because otherwise their Jesus feelings might get hurt.