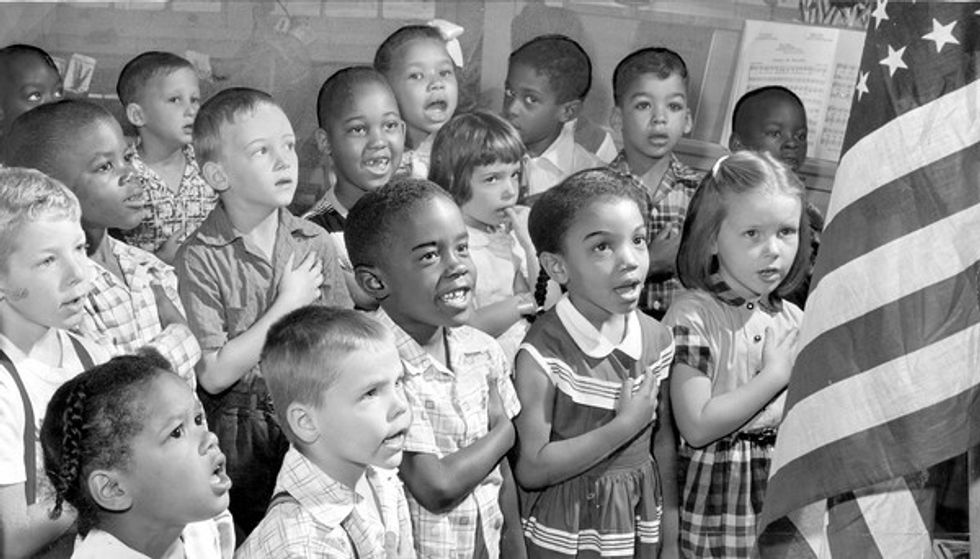 You can call this one "Nice Time" because it finally happened, or "WTF???" because it happened 62 years after Brown v. Board of Education -- nearly to the day: A federal court ordered the school district in Cleveland, Mississippi (Population 12,000), to finally integrate its damn school system already, in a case that's been dragging on since 1969. The plan requires the merging of two high schools and two middle schools that are currently largely segregated. Although the community is roughly half white and half African-American, the school population of 3,700 students is roughly 66% black and 30% white. Hooray for homeschooling and "private academies."

A Justice Department press release has the details:

Under the Justice Department’s plan approved by the court -- which was developed in consultation with experts in school desegregation, school facilities, school financing and parent and community engagement -- the district will consolidate the virtually all-black D.M. Smith Middle School with the historically white Margaret Green Junior High School. The district will also consolidate the virtually all-black East Side High School with the historically white Cleveland High School. Further, the district will review its existing educational programs and identify new programs for the consolidated schools, address staffing considerations and perform necessary maintenance and upgrades to facilities.

Cleveland is one of those fine old southern towns that's literally divided by railroad tracks, with most African-Americans on the east side and whites on the west. The court tossed two proposals put forward by the school district as unconstitutional, and gave the city a stern wag of the finger, noting

the delay in desegregation has deprived generations of students of the constitutionally-guaranteed right of an integrated education. Although no court order can right these wrongs, it is the duty of the [d]istrict to ensure that not one more student suffers under this burden.

U.S. District Judge Debra Brown ordered the schools to submit a timeline for implementing the decision within 21 days; the Jackson Clarion-Ledger reports the Bolivar County Board of Education is still reviewing the decision; the board's attorney, Holmes Adams, says the board will decide whether to appeal, but first has to study the 96-page opinion. So hooray, the case could drag on for a few more years! A Cleveland attorney who assisted the Justice Department in drawing up the desegregation plan, Ellis Turnage, said that compared to other parts of the Mississippi Delta, more white students attend public schools in Cleveland; the Clarion-Ledger rather noncommittally says Turnage "said it will be interesting to see if whites stay or leave the district if the secondary schools are consolidated." Yes, that would indeed be interesting.

Cleveland is not unique in this effort, as there are over 40 school districts still under a federal mandate to remove all vestiges of segregation in Mississippi and hundreds throughout the South. Many Mississippi towns are divided by the symbolic and, in some cases, actual railroad tracks. This separation is often mirrored by alarming resource and academic disparities.

In other news, some moron on Twitter complained about how hard it is to be white these days (no link, we just know it happened).

And since it's a story about Mississippi and race, here's your Nina Simone: