Feisty Liberal Obama Plans To Tax The Hell Out Of Rich People, For America 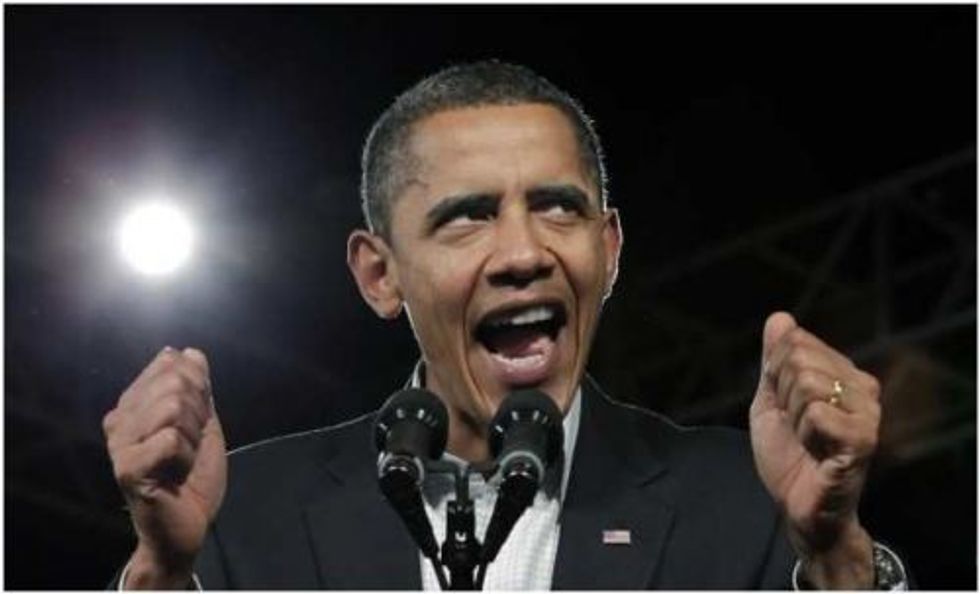 Now that Obama is a good president again because gas prices are low, he appears to be feeling his oats. And when Obama feels his oats, you know what happens: COMMON-SENSE PROPOSALS! For tax reforms that strengthen the middle class and ask wealthy Americans to pay their fair share! HOT DAMN AND DIGGIDY!

Obama plans to use his upcoming State of the Union Address to push for several eminently reasonable amendments to the tax code that will either never happen or come as part of a deal with Republicans to turn Medicaid into a voucher for 10% off a hot sandwich. Our good friend The White House Press Office snuck us a peek at Obama's proposals in an email called “FACT SHEET: A Simpler, Fairer Tax Code That Responsibly Invests in Middle Class Families.” The FACT SHEET has a lot of details about the things, and links to even more details like a trippy fractal of sober fiscal policy.

GIST: New taxes on very rich people and giant over-leveraged corporations, to pay for tax credits for breeders, marrieds, scholars, and even us none-of-the-aboves! Also, tacked onto the end, new rules to help proletarians save for enfeeblement.

IMPRESSIONS: 1) This document smells strongly of Elizabeth Warren. Or Obama when he's running for office; that is to say, full of wet beans. We have missed Candidate Obama, who was always so fired up about helping America! But the language here about "a fee on the biggest financial firms, making it more costly for them to borrow heavily" is straight Warren. Yet more evidence of Democrats acting like Democrats?

2) There's an easter egg for anyone who reads to the bottom of the long version. Remember Romney's hundred million dollar retirement account? Here's the last bullet point on the last page of the FACT SHEET:

Ha! "300 extraordinarily wealthy individuals," one of whom is not currently the president partly because he had just such an account and didn't quite seem to fathom why that made it awkward for him to call for EVEN MORE TAX CUTS for people with hundred million dollar IRAs.

3) Here's where things get dicey. It strikes us as a poor play to lead off, as this FACT SHEET does, with so much minute detail on who's getting their taxes raised, and how, and why, to pay for all the tax cuts for the rest of us. Sure, it's very honest and transparent, but where has that ever gotten anyone in politics? Jimmy Carter, that's where. Why not just talk about all the goodies first, and leave it to the GOP to ask how we pay for it? "Well, how about Mitt Romney's IRA? How about CitiBank?" See? Draw it out a little; make the GOP either say "no" to the tax cuts straight out, or defend unpopular tax preferences for the wealthy, but only after you've dangled a few grand in front of Pete and Betty Taxpayer. Don't let Fox write the headline "Obama to call for new tax increases in State of the Union address."

4) In that same vein, we are pretty sick of hearing about the "middle class." Only 44 percent of Americans consider themselves middle class anymore. So what about something more inclusive, like "working people"? Then we'll inevitably be treated to the spectacle of the $400K/yr law partner whining to the Wall Street Journal that he's a working person too! That'll really engender a lot of sympathy from about six people.

Yeah, we know, “It is not the critic who counts. The credit belongs to the man who is actually in the arena.” Put us in the damn arena! We'll message the shit out of some tax hikes! We're so good, you probably think we're liberals. Ha! We're actually Belgian royalists, you stupid peasants!

Ultimately, it's very good to have Barack Obama hewing closer to Liz Warren than Hillary Clinton, which is maybe where he wanted to hew all along.