Festivus Miracle: Wonkette, Washington Free Beacon Agree On 'Man Of Year,' Just Not Which Year Or Why 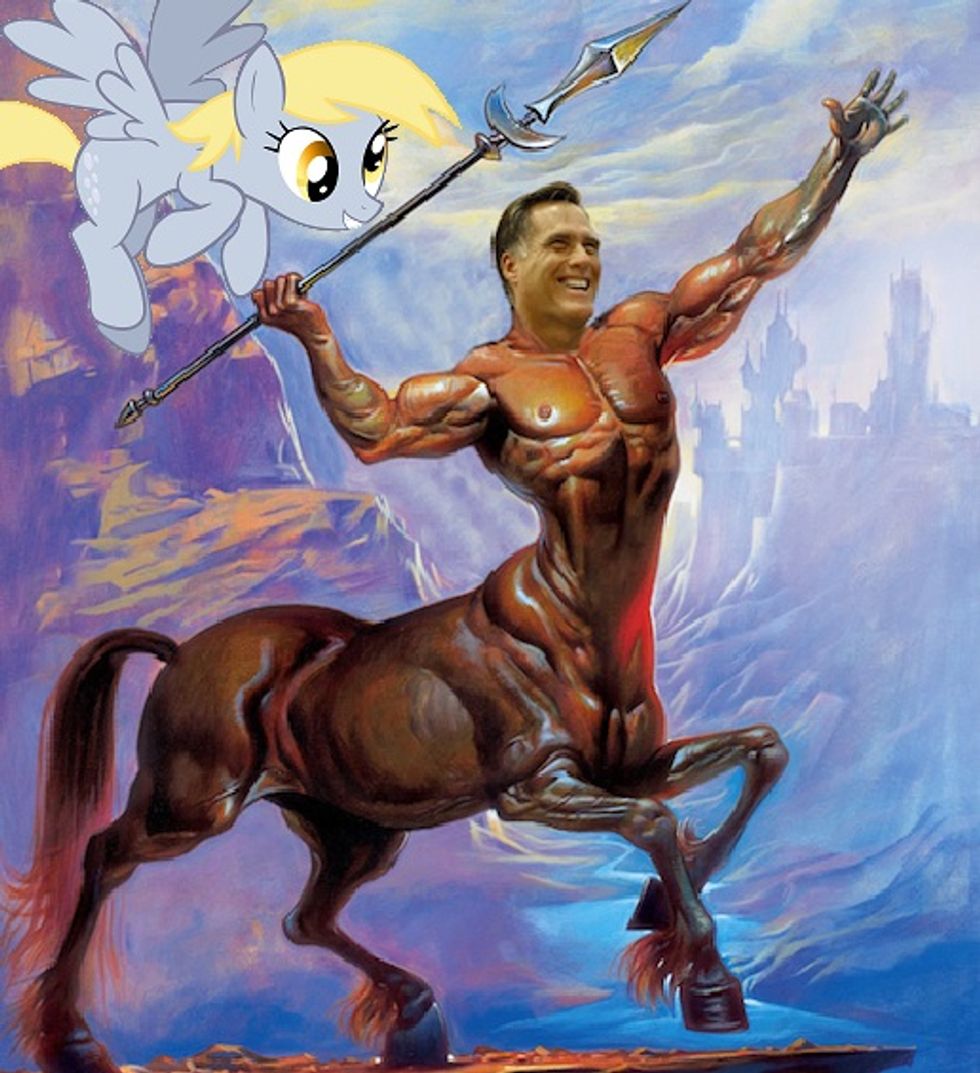 We're going to assume that, even though it includes that image up there (minus Derpy Hooves, of course),this post on today's Washington Free Beacon is not actually joking in naming Mitt Romney 2013's "Man of the Year." And to think, they're only a year behind Yr Wonkette; we declared Mitt the Hu-Man of the Year 2012, for all the laughs. Or at least 47% of the laughs.

The Mighty Favog knows their lede has all the earnest butthurt one could ask for:

America didn’t want him, needs him more than ever, and does not deserve him.

Remember when Americans still had affordable health insurance? Mitt Romney does. Remember how crazy it was to think Russia could be “our number one geopolitical foe”? Mitt Romney might, assuming he still thinks about politics when he’s not installing car elevators in his La Jolla mansion or nurturing one of the finest tans in the industrialized world.

See? Hard to tell how straight they want us to take that -- even aside from the carping about the rollout of the ACA, are we really supposed to believe that we're on the brink of war with Russia or something? Apart from Russia granting asylum to Ed Snowden and their passage of that terrible anti-gay law (which we've got to assume the Free Beacon isn't terribly worried about anyway), did the Rooshians suddenly vindicate the Mittbot by vaulting past China or Iran as foreign policy worry #1?

Our reasons for choosing Mitt in 2012 were a bit less ambiguous: The guy was a gift to comedy, seemingly incapable of opening his mouth without insulting somebody, lying, or making no goddamn sense at all -- and sometimes all three at once. Also the sneer. And the sense of entitlement. And more than anything, the taking responsibility for his life, unlike moochers. And if it hadn't been for that dumb hurricane, or for the failure of the blacks 'n' Hispanics to recognize his awesomeness, or for the news media's failure to treat his 47% comments fairly, he would be President today.

Oh, but Americans were such fools:

Like a of bunch of rebellious schoolgirls, the American people doubled down on their edgy fling last November rather than accept a wholesome Mormon into their hearts. Buyer’s remorse is now sweeping the country, as polls show Romney beating President Barack Obama in an electoral rematch one year later. The would-be first couple charmed viewers of the “Rachel Ray Show” during an October appearance that was just adorbs. His sons are saving lives, and look great doing it.

Mitt & Egg look great on Rachel Ray, you dunces! Don't you regret your missed opportunity, you silly schoolgirls, clinging to your slut pills and right to choose and affordable healthcare? (That last one's an illusion, anyway -- didn't you notice how everyone's dead now?)

Ah, Mitt, we wronged you. We wronged you so badly. And now Mitt's a private citizen who doesn't have to worry about his approval rating. Besides, says the Free Beacon, Mitt "has enough money to not need to care about things like 'popularity.'” And really, when you think about it, isn't that what ultimately matters?

Then again, maybe the Free Beacon is just having a little joke on us after all:

And while there are plenty of jobs, including president, that Romney would excel at, such as Detroit bankruptcy manager or Washington Metropolitan Area Transit Authority CEO or Men’s Wearhouse floor model, his talents would no doubt be wasted on an ungrateful nation.

What a year it could have been.

Dunno. Maybe it's some of that satire-that's-not-funny that we have so much trouble wrapping our little librul minds around.