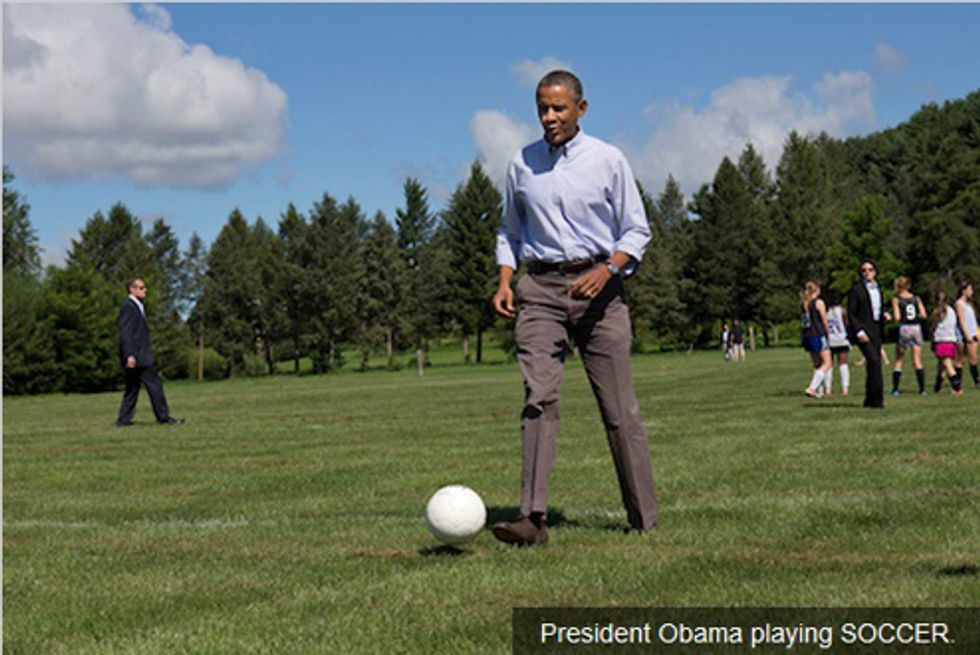 President Obama referred to the sport of soccer as “football” during a press conference in Brussels on Thursday, raising questions about his commitment to America.

For a publication usually devoted to general wingnuttery, Andrew Stiles's piece is actually a pretty good parody of wingnuttery, and for this, credit must be given. Bravo, Mr. Stiles.

Experts agree that soccer is almost indistinguishable from socialism. The sport does have some positive aspects, such as allowing American hipsters to engage in unironic expressions of patriotism. But at its core, soccer is a profoundly obnoxious enterprise.

The sport’s adherents frequently harass the general population with stories about the time they “lived” (studied abroad) in Europe and attended the “matches” (games) of their favorite “club” (team) and sang special songs as the players ran around on the “pitch” (field) in shiny “kits” (uniforms) and check out this cool scarf I got!

Hearing someone (any American, that is) refer to soccer as “football” is one of the most definitive signs that you should never be friends with that person.

Now, it should be noted that, in the video posted as "evidence" of this alleged "gaffe," Mr. Obama only mentions "football" in response to a question (not included) which obviously was phrased using that strange foreign word.

We must ask: Would our esteemed colleague at the Free Beacon seriously wish for the President to ignite an international con-traw-versy by pointedly insulting the questioner and insisting on saying "soccer" instead? Rather than condemn him for saying "football," can't you at least give the man credit for defending our homegrown sportsball innovations of baseball and baskets-ball against the braggings of British PM Cameron?

There, now we've fulfilled our part of the bargain and lamely attempted to justify the President's scandalous actions, demonstrating our blind allegiance to The One.

Follow Doktor Zoom on Twitter. For some reason, now he's thinking of the old Loony Toons with the Coyote and the Sheepdog. "Morning, Sam." Morning, Ralph."