Fine, Mr. President, If You Insist, We'd Be OK With Australian-Style Healthcare Too 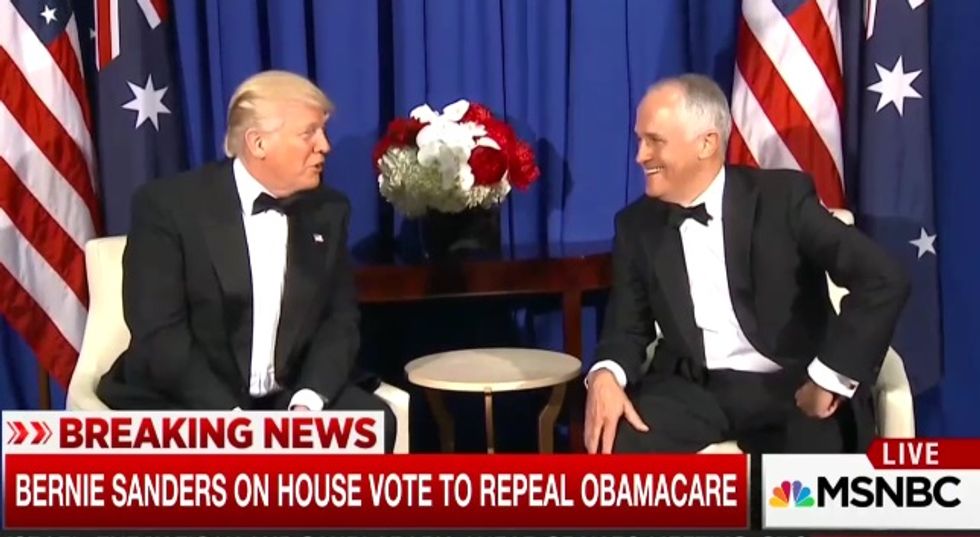 Thursday was a big day for Donald Trump! First he had a big party for TrumpCare passing one house of Congress, arguably the first time a major Rose Garden celebration has ever been held after only a partial legislative victory, and certainly an excellent source of B-Roll footage for 2018 campaign ads by Democrats running against the weasels who voted to strip health insurance from tens of millions of Americans. Then Trump was off to New York and the USS Intrepid Museum for a meeting with Australian Prime Minister Malcolm Turnbull, to celebrate the 75th anniversary of the Battle of the Coral Sea during WWII. After being met by protesters who shouted "Shame! Shame!" -- something he ought to get used to -- Trump took a few questions during a photo op, during which he had some thoughts about TrumpDon'tCare's chances in the Senate. Enjoy Bernie Sanders reacting to Trump on MSNBC's "All In":

Trump: Australia has better health care than U.S. (they have universal health care)

Watch the reaction from @BernieSanders to @chrislhayes pic.twitter.com/zYF8NsGKF0

Not only did Trump lie -- or just say what he wants to believe is true about the load of dingos' bollocks the House passed yesterday -- he also couldn't quite remember his guest's name:

Malcolm Turnbull. It's Malcolm Turnbull, you bloody wanker. But at least you got it right about Australia's healthcare system, which is better than Obamacare, and infinitely better than the barrel of wombat droppings headed for the Senate.

As it turns out, Australia's healthcare system is a good ol' single-payer system, with a national insurance system -- called "Medicare," even -- that covers everyone's basic health care needs. If people want additional coverage, they can also purchase supplemental private insurance as well, as is common in many single-payer systems.

We're with Bernie when it comes to the implications here:

OK! OK! Wait a minute -- the president has just said it! That's great! Let's take a look at the Australian healthcare system. And let's move -- maybe he wants to take a look at the Canadian system or systems throughout Europe. Thank you, Mr. President!

Let us move to a Medicare-for-all system that does what every other major country on the earth does: guaranteed healthcare to all people at a fraction of the cost per capita that we spend.

Thank you Mr. President, we'll quote you on the floor of the Senate.

You won't believe how completely Trump has figured this out. All the pieces are coming together. No, you can't peek.

We don't generally agree with Donald Trump, but if he's going to go there, we have little choice but to agree: #AussieHealthcareNow! After all, a single-payer system would actually fulfill what Trump (again, accidentally) called for back in January: "Insurance for everybody."

“We’re going to have insurance for everybody,” Trump said. “There was a philosophy in some circles that if you can’t pay for it, you don’t get it. That’s not going to happen with us.” People covered under the law “can expect to have great health care. It will be in a much simplified form. Much less expensive and much better.”

Single-payer definitely fits the bill for all of those, although if you want to get really technical, no healthcare at all is also very simplified, less expensive (at least until a minor problem becomes a major crisis) and "much better" if you're one of the people making over $200,000 a year who stands to get a giant tax cut with TrumpCare.

Trump has in the past had nice things to say about single-payer systems, although he's then said it couldn't work here, without saying why. During a 2015 Republican debate, Trump said,

As far as single payer, it works in Canada. It works incredibly well in Scotland. It could have worked in a different age, which is the age you’re talking about here.

Why Does MSNBC Think We Want To Watch Joe Walsh Being Racist (Again)?

That inner-city youth is at risk! Poor kid might be crushed by a straw man!

That would be the Age of What the Fuck Are You Talking About with "Ages" here? Could be Trump just agrees with racist Joe Walsh that America has too many "large, inner-city diverse populations," if you know what he means, because brown people make single-payer systems go all funny.

Screw it. The president says Australia's system is better than ours. He's right, for once, and we demand he get to work on implementing #AussieHealthcareNow, damn it.

Yr Wonkette is supported by reader contributions and the hope of Australian healthcare. You can do one of those right now by clicking the "Donate" linky below!