Fine, Sure, Star Wars Is Muslim, Whatever. Live Long And Prosper, Weirdo. 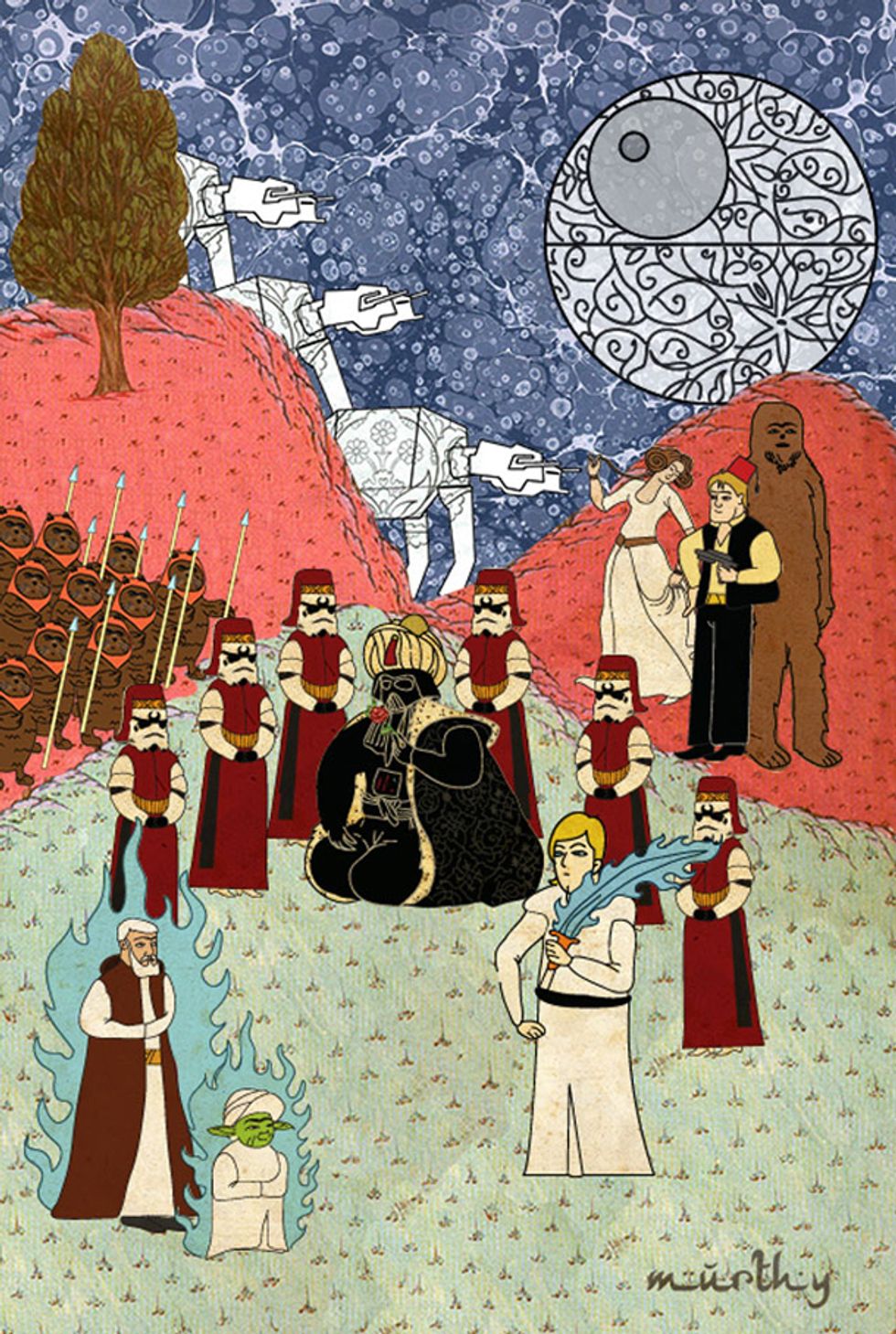 CNN brought us a rather fun thinky piece Tuesday, making a case for the possible Islamic underpinnings of the Star Wars films -- except that it's not making that case at all, and is mostly an excuse for a scholar who knows more than a thing or two about Islam (and not quite as much about Star Wars) to do some Deep Trolling. As a close reading of the movies, the piece, by H.A. Hellyer, makes for a pretty fair freshman essay in introductory Media Studies; as satire, it's pretty much got one joke, which doesn't really work so great, but hey, it's an excuse to talk about politics and Star Wars again, so why not?

Hellyer offers plenty of hints that his piece, titled "'Star Wars' or ISIS: Which is more Islamic?" isn't exactly serious, but also plenty of details that are just suggestive enough to demonstrate that you can take any text and stuff it with far more Lit Crit than any English teacher should let you get away with. He suggests that the Jedi and their sad devotion to that ancient religion are in fact modeled on Sufi practices, that Yoda and Obi-Wan Kenobi and their mentorship of Luke Skywalker reflect "the spirituality of the Sufi order," and that the Jedi code perfectly reflects the best of Islamic spirituality:

The code that the Jedi upholds in these films is clear -- it is one of absolute chivalry to the outside world on the one side, and one of complete and total control over one's own self on the other.

That dual responsibility of awareness to oneself and ones surroundings is, again, a repeated theme in Islamic spirituality -- centuries ago, Abu-l-Qasim al-Qushayri wrote "Risala al-Qushayriyya," the "Qushayri Epistle," where the author goes into a good deal of depth of what "futuwwah" or chivalry is meant to be for the serious believer.

We knew that Hellyer was taking the piss, though, when he completely failed to connect the Sufi trickster Nasruddin with Jar-Jar Binks -- leaving that out was a pretty obvious giveaway. Also, no, Mr. Movie Analysis Man, you can't suggest that because Yoda lives in a cave, we should call to mind the "Quranic chapter of 'the Cave.'" No, sir, you cannot say that! Yoda lived in a hut, good sir, and the cave was where Luke had to face the Dark Side, in the form of a very moody matte painting and some cheesy special effects. And finally, we take great umbrage at Hellyer's suggestion that Jedi robes were inspired by the "North African djellaba," when that garment is clearly the inspiration for Jawas instead.

Jeez, get it right.

Hellyer's real satirical target, though most readers seem to have missed it, is ISIS, and especially that Atlantic piece from March claiming that ISIS is "Islamic -- very Islamic." So what Hellyer's getting at is that if'n you wanted to, you could show that just about anything is more Islamic than ISIS is -- like maybe Star Wars, because ISIS isn't very Islamic. We're not sure the joke was worth playing out over 960 words, but if CNN wrote Hellyer a check, then good on him.

The best comedy, though, came in the comments, which mostly fell into three camps: Star Wars True Fans who wanted to make it quite clear that Hellyer knows nothing of George Lucas's brilliant interweaving of Joseph Campbell and Kurosawa (the Jedi are Samurai, not Sufis); casual readers who couldn't believe CNN would waste space on a moron who says a fun little 1977 space opera has any meaning at all (these people always signed up for our lit classes and insisted that Huckleberry Finn was just a funny adventure story); and Defenders Of Western Civilization who stopped in to say that Islam IS the Dark Side, and also Hellyer better watch his back because now The Muslims gonna kill him for mocking "The Religion Of Peace," haw haw haw, just like those crazy Muslims who thought a Lego set insulted Islam.

So, no, not everybody got it, not that there was that much to get in the first place. Even so, it's a fun little read, and nowhere near as tedious as the 100 percent serious fundamentalist Christian movie we saw in college that warned good Christians that Star Wars was really an attempt to recruit innocent Western youth into the insidious pantheism of Hindu beliefs, and that enjoying it too much would put you on the path to Hell.