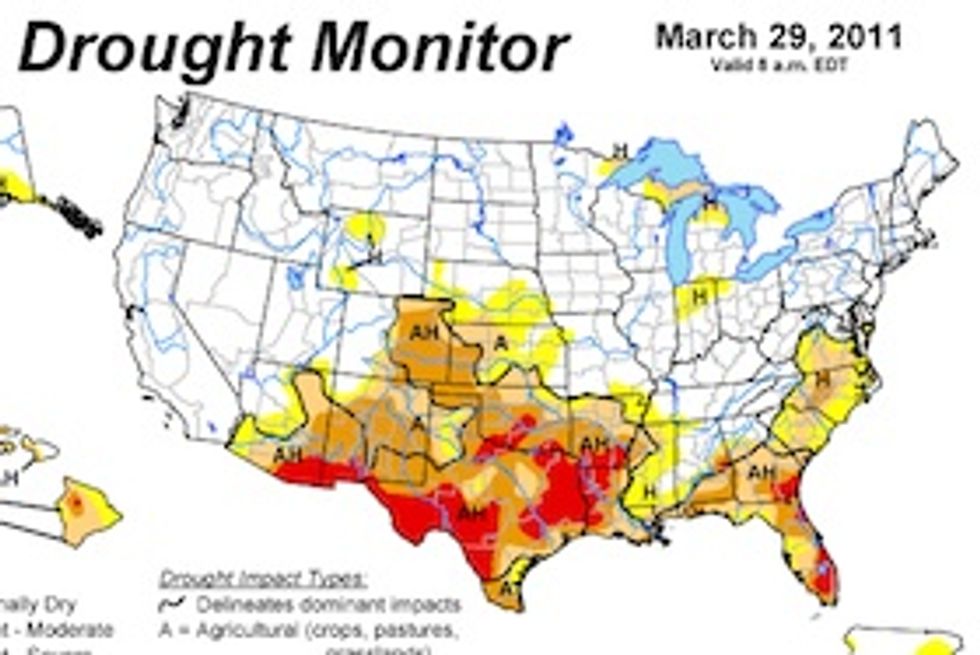 A devilish hoax called Global Warming is wreaking havoc on the un-ironically named "Dust Bowl," where the worst drought since the 1920s is turning cropfields to scorched earth while savage wildfires turn the remaining forests into, well, scorched trees. The rains never arrived during "rainy season" and now it's only the second week of Spring and the whole godforsaken place from the Colorado Plateau to the Gulf Coast isdried up or in flames. Says a cold-hearted robot known as the U.S. Drought Monitor: "Many drought indicators in east-central Texas have reached the Exceptional Drought (D4) level, and if rain does not materialize soon, intensification of the current drought is likely." Get the Model A loaded up and California bound, and tell old Uncle John Joad to load up the shotguns lest the murderous capitalist-swine bankers try to stop us on the way out.

Of course, California isn't in too good a shape, either -- if you ain't got the Do-Re-Mi, at least.

(And, in remembrance of poor old Kurt Cobain, who blew his brains out 17 years ago yesterday, here's the Nirvana song called "Do Re Mi," which has nothing to do with the Woody Guthrie song other than that they both have acoustic guitars and nasal vocals.) [MSNBC]