First They Came For Donald Trump, And Ben Carson Said 'I Think You Want That Other Guy' 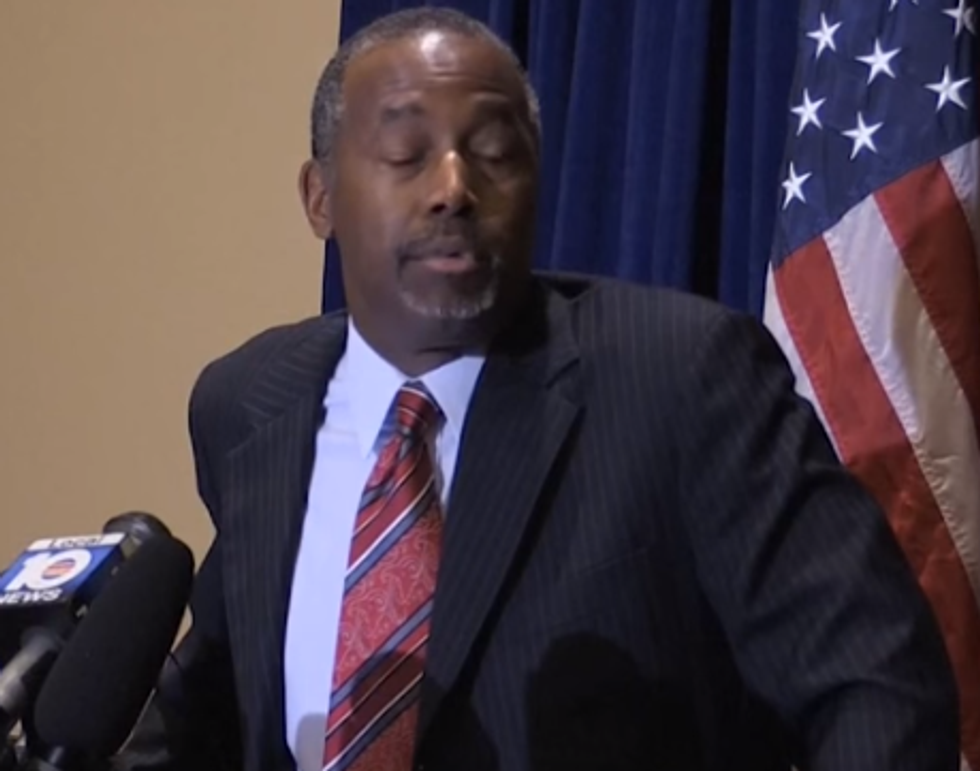 Also, Reince Priebus will be uninvited from my birthday party

[contextly_sidebar id="X4kOjBcMr9btfmzTFugNKnGZoivohJtz"]Doctor Ben Carson would like you all to know he is not one bit pleased about these murmurings that the GOP establishment is plotting to deny the nomination to Donald Trump -- or to Ben Carson, which could totally still happen, he thinks. And by golly, if all those Washington Insiders who have never separated conjoined twins even once keep planning for a brokered convention, Carson said Friday, he will say goodbye to the Republican Party and let it collapse without him. Fie on you traitorous insiders, he says, Fie!

"If this was the beginning of the plan to subvert the will of the voters and replace them with the will of the political elite, I assure you Donald Trump will not be the only one leaving the party," Carson said in reference to a private dinner attended in Washington by 20 party officials including Senate Majority Leader Mitch McConnell and RNC Chairman Reince Priebus.

We are unsure whether to reach for the popcorn or the Kleenex. Not that Carson has quite as much political weight to throw around as he did several weeks ago, when he was briefly tied with Donald Trump for first in the polls; now Carson is well behind Ted Cruz and falling.

But by golly, before he sinks any further into irrelevance, Mr. Orange there is going to let the party bigwigs know they cannot piss on Ben Carson, brain surgeon! Carson released a statement warning that if GOP leaders try to substitute some Jebby-Come-Lately at the convention, he will take the party down. Except he won't have to, because such a move would be proof the party is falling apart anyway:

If the leaders of the Republican Party want to destroy the party, they should continue to hold meetings like the one described in the Washington Post this morning [...]

I pray that the report in the Post this morning was incorrect. If it is correct, every voter who is standing for change must know they are being betrayed. I won’t stand for it.

Got it, GOP? The novelty flavor of a couple months ago, before everyone noticed he kept saying stuff that sounded outright crazy, has just about had it with your shenanigans, not to mention your folderol, and if you betray the will of the people, which by the middle of next summer ought to be exactly where the polls are right now, you will never have lunch in this town again. Or any town! Carson stomped his pretty little foot and warned against such skullduggery:

This process is the one played out by our party. If the powerful try to manipulate it, the Republican National Convention in Cleveland next summer may be the last convention. I am prepared to lose fair and square, as I am sure is Donald. But I will not sit by and watch a theft.

Surely Republican insiders must quake in fear at the prospect of the last GOP convention ever. Because what is the nominating process if not an expression of the will of We The People, huh? Besides also being a springboard for a life on the Wingnut Welfare circuit, where just about any right-winger who's taken a stab at running for president can look forward to an eternity of book contracts, speaker's fees, and Fox News punditry. And if the Republican Party fails to recognize the inevitability of Donald Trump, or Ben Carson of course, then surely the sacred birthright of every American to run for president and then get his or her own AM radio show no longer means anything.

This is a matter of principle, especially the principle of reminding disaffected Republican voters that Ben Carson is still running for president, and if blowing wet kisses in the direction of Donald Trump has helped Ted Cruz, maybe it can help Ben Carson, too.