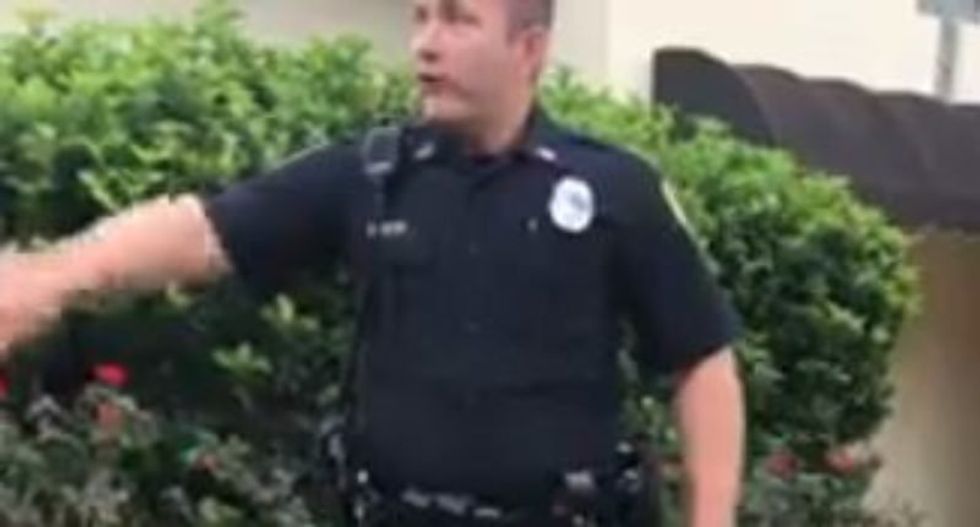 Last week, in Jacksonville, Florida, Officer J.S. Bolen of the Jacksonville Sheriff's Office aggressively confronted Devonte Shipman, a 21-year-old black man, for jaywalking, attempted to arrest him, and then proceeded to make up a law in order to file an additional charge.

There is video (via Blacktivist), and it is absolutely freaking nauseating. It's sickening. The way this officer talks to this young man over a jaywalking charge, you would think he just set the damn crosswalk on fire.

In the video, Shipman asks the officer what he did wrong; Officer Bolen responds by saying “Take your camera and point it across there at the red hand,” and then tells him that he was fining him and his friend $65 for jaywalking, and demanded they get in Bolen's car. For... jaywalking. Shipman was taken aback and asked why -- what with jaywalking not being a crime people are traditionally hauled away in police vehicles for -- and Bolen said he would throw him in jail for "resisting."

On the way to the car, Officer Bolen asked for his ID, and Shipman said he didn't have it on him.

“That’s another infraction," Officer Bolen said. "In the state of Florida, you have to have an ID card on you identifying who you are or I can detain you for seven hours until I figure out who you are.”

EXCEPT IT IS NOT. It is, if you are driving, but Shipman was clearly not driving. As evidenced by the fact that he was being charged with jaywalking.

Nonetheless, Officer Bolen issued him a $136 ticket for violating Florida Statute 322.15, which states:

“Every licensee shall have his or her driver license, which must be fully legible with no portion of such license faded, altered, mutilated, or defaced, in his or her immediate possession at all times when operating a motor vehicle and shall present or submit the same upon the demand of a law enforcement officer or an authorized representative of the department.”

He also issued a citation for $62.50 for failing to obey a pedestrian control signal. So that is $263.50, in citations, for crossing the street at the wrong time.

Not only that, but at one point, Shipman and his friend, who was recording the video, were surrounded by three police vehicles. For, again, jaywalking. During this argument, by the way, another person walks across the street, willy nilly, and is not "detained" for doing so.

According to the Florida Times-Union, the Jacksonville police department is "reviewing" the video, but Officer Bolen is not being investigated himself. Which seems like a real poor idea because that guy is clearly a damned lunatic and a danger to have on the streets. I'm sorry, but no -- you cannot have an officer out there, on the streets, who loses his temper like that over a jaywalking infraction, going around making up his own laws. That is unacceptable and he needs to go.

In a related incident over the weekend, three black teens found themselves in handcuffs for "illegally" selling water at the National Mall.

But if anyone has any further lingering questions about why black people might have some issues with the police, I suggest they take a moment and think about how they would feel if this was how they were treated for getting caught jaywalking or selling water, and reconsider things. Because boy, this is all very fucked.