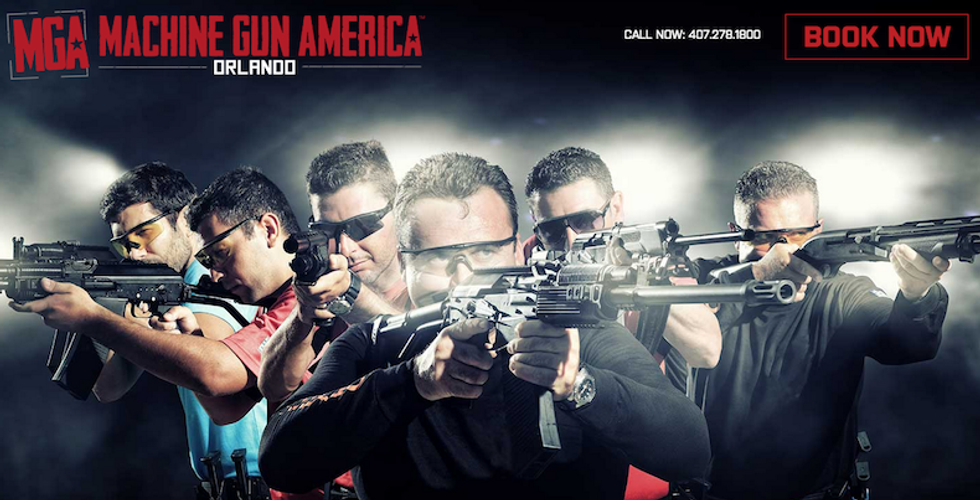 Orlando has long been a destination for theme-park enthusiasts, so if you're planning to bring the kids to see Mickey and Minnie, be sure to swing by Machine Gun America, a brand-spankin'-new theme park that opens Saturday, Dec. 20. If you have to ask what kinds of fun things you can do at Machine Gun America, try saying the name out loud. Are you getting it yet? WTSP explains more.

The weapons are available to adults and children as young as 13 with the parent's permission. All, must be accompanied by a trained instructor called a range safety officer.

Machine Gun America insists that they'll avoid any repeats of that thoroughly distasteful incident in Arizona a few months back, on account of they do this stuff all the time!

"I've had a lot of children fire with me before, and I'm always prepared because I am the one the whole time who is holding the firearm," said Natasha Schweitzer, one of the [range safety officers].

What could possibly go wrong? Well, if you stay tuned to Yr Wonket, we'll probably be able to tell you what could go wrong sooner rather than later.

Obviously, the freedom-hating tyrants at Mom's Demand Action aren't pleased about this. They're all like, "How is this going to end well?" and also, "Jesus burst-firin' Christ on a Picatinny rail, I give up." Machine Gun America has an answer to that first question: this will end well because freedom, and also historical revisionism.

"It's romanticizing our freedom and our history," said Nierenberg. "I mean, it's part of American life. That's how we gained our freedom."

Excellent point, Revolutionary War scholar Bruce Nierenberg! The old story was that the French navy's triumph at the Battle of the Chesapeake sealed the Continental Army's victory at Yorktown, but recent scholarship has firmly established that Cornwallis surrendered because of George Washington's bitchin' machine guns. It's a fact, libruls, look it up.

Machine Gun America will offer "high-tech simulators with seems [sic] like an old west shootout, special ops, even zombies," but there's no word yet on whether visitors will be able to shoot Skittles-carrying teenagers. Then again, do you really need to go to a theme park to do that if you're already in Florida?