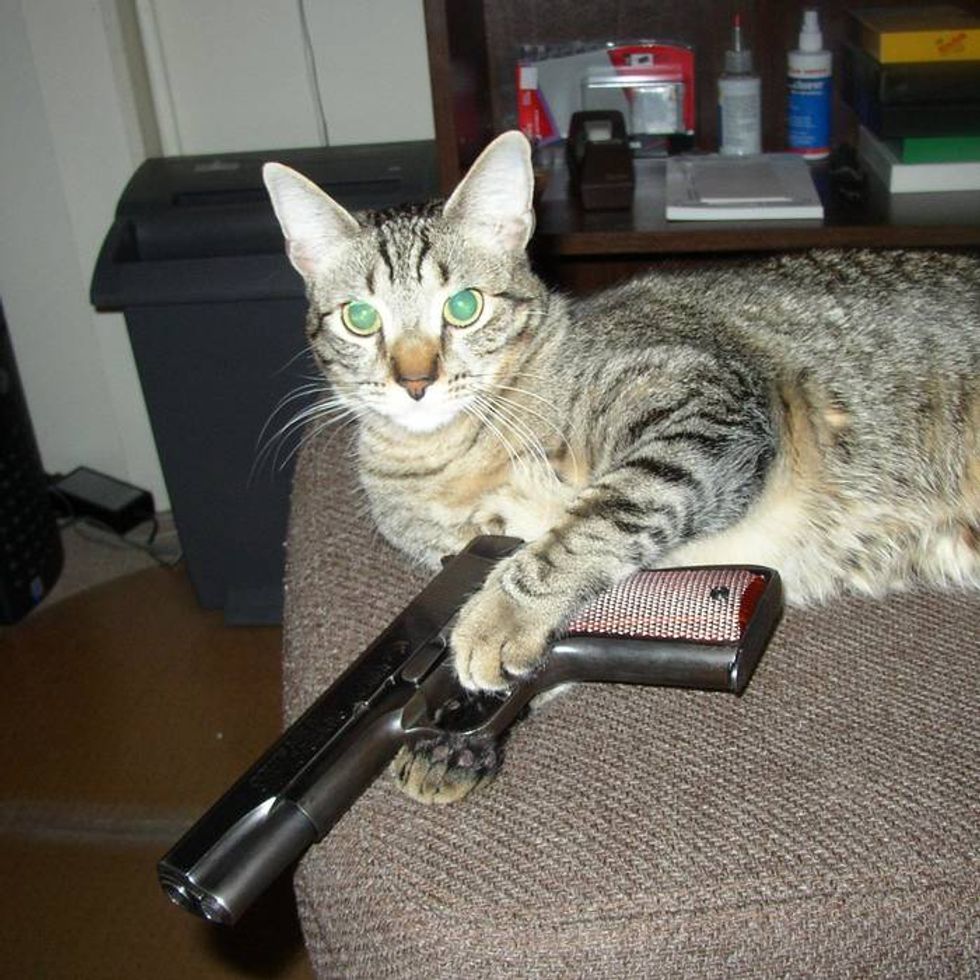 Cats with guns regret nothing.

A Florida man who killed his 14-year-old son when he negligently fired his gun at a shooting range is really torn up about the whole incident, especially all the mean things people tend to say about guns. But he really is a responsible gun owner: He insists that there's no one to blame for his son's death but him, and would people please lay off the innocent guns, which haven't done anything but keep America safe from tyranny and keep American families safe from violent home invaders, at least when they're not shooting their families in freak accidents, crimes of passion, or the occasional murder-suicide.

On Sunday, Clayton Brumby, 64, took three of his seven kids, aged 24, 14, and 12, with him to High Noon Gun Range in Sarasota, Florida, for a fun afternoon of target practice, and one of the shell casings took a funny hop after it was ejected from his semiautomatic pistol:

After Clayton Brumby fired a round at a target the bullet casing was ejected from the handgun.

The casing bounced off the wall and fell into the back of his shirt, the [Sarasota County Sheriff's Office] said.

In an attempt to remove the casing, the elder Brumby reached behind his back with the hand that was holding the gun. While doing so, he inadvertently pulled the trigger, the department said.

The father said the round hit the ceiling and came down on his son.

"It was a very freak accident. I made a mistake," he said.

The sheriff's office said its investigation is continuing, but there are as yet no charges pending against Mr. Brumby.

Brumby told CNN his son was a wonderful boy, very creative and smart, and that he wanted all of his kids to learn gun safety, something he said he'd introduced to all seven of his offspring, who are of course homeschooled and very Christian. Stephen, the 14-year-old who was shot and died, played piano at their church and had a keen interest in shooting, said his father:

"We wanted our kids to be aware of guns," he said. "I wanted them to be comfortable around them and understand them."

We're guessing the other two children who saw Stephen shot dead learned a lesson they'll never forget. You live and you learn. Or at least some of you do.

Brumby also explained that the freak accident says absolutely nothing about America's glut of guns, because guns are awesome and keep us safe, except when we misuse them, and that is just one of those things that happens sometimes:

"Every round in the gun is your responsibility. When it fires you need to stand to account for it. That's what I've spent the last two days doing, accounting for my operating error."

Apparently, Mr. Brumby's accounting ended up with a conclusion that one little negligent discharge following a freak accident doesn't mean that keeping guns in the home is a bad idea, because of course you need guns to defend your quiver full of kids. We suppose it's not too much of a surprise; even after fatal traffic accidents, few people give up driving forever. Then again, few seem to feel quite so compelled to go on at great length about how wonderful cars are, and no one should think ill of cars.

In any case, it's not like Stephen's really dead, he's just gone on to eternal life:

"I can't fix this. It's just a great loss but thankfully we'll see him someday. I have a feeling he's on a great lake out there."

Heaven's pretty cool that way: Everyone in the family will be back with Stephen anyway, so a little shooting your kid to death is only a temporary separation. And in heaven, the bullets don't even hurt you.

The family has set up a GoFundMe account to help pay for Stephen's funeral, emphasizing that he was a wonderful child who is Up In Heaven Now, where he can meet all his heroes from the Bible.

As of Tuesday morning, the site had more than doubled its $10,000 goal, so in addition to paying for their son's funeral, the Brumby family can afford more time in gun safety lessons for their remaining minor children. We trust they're not planning to send any of their other children to keep Stephen company.