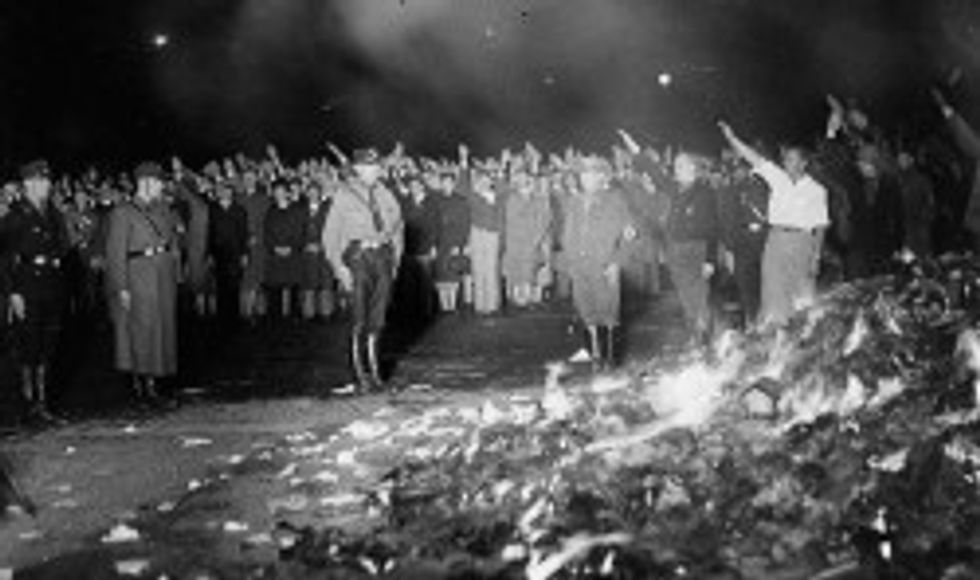 Some days we think we might just change the name of all our posts to "So! What'd you donow, Florida, HENGGGGH?" Because it seems like every single day, we get another Florida failure for the file. Or not seems like. Just every. single. day. And you know, sucking up every way to be the example of lowest common denominator inanity-insanity is no way to go through life, son. Still and yet, here we are, back in free-range asylum country, this time with Pastor Terry Jones, the gonna-burn-a-Koran attention-whorey head of the "Dove World Outreach Center," some whackadoo church in Gainesville. (And we were born there y'all, so we can say with certainty, nothing good ever comes out of Gainesville.)

So! What'd you do now, Pastor Terry Jones, hmmm? (Besides continually besmirch the good name of a fine Monty Python member?) Well, it seems like Pastor Terry Jones was only just a-toolin' down the highway to Tampa in his pick-em-up truck, like ya do, dragging 2998 kerosene soaked Korans along behind him.

Pastor Terry Jones was reportedly arrested in Polk County, Florida just before 5pm ET Wednesday for “transporting hazardous materials.” When he was pulled over by police, Jones had 2,998 kerosene-soaked Korans in the bed of his pickup truck as well as in a large barbeque grill he was towing behind him.

Jones’ arrest came just minutes before he was scheduled to burn the Muslim holy books near Tampa Bay, as outlined on the Facebook page for the event.

Fucking Facebook, it is of the devil. Don't you know that posting your impending book burning events on Facebook will make even the cops of Florida kinda curious?

And now you should also know, you do not pre-soak your Korans in kerosene, Pastor Terry Jones, you gotta wait til you get where you are going and transport your kerosene in proper containers, not books, or you will get popped for the felony of "unlawfully transporting fuel."

The man to whom the truck belonged was also cited for "improper lighting on the trailer." For God's sake man, everyone knows you always make sure you have all the proper lights on your trailer when you commit your felonies, just come on.

As stupid as this all was of course, it was also just more of the same stupid. 2998 times more.

Jones came to prominence by threatening to hold the highly-controversial “Burn a Koran Day” on the 9th anniversary of 9/11 in 2010. He was also one of the loudest voices in opposition to the “Ground Zero Mosque” project.

Whatever. Repetitive Islamaphobic racist is repetitive. What else can you do besides plan to burn Korans on 9-11?

More recently, Jones hosted a pro-George Zimmerman rally in Sanford, Florida, and helped promote the “Innocence of Muslims” film that led to widespread protests in Egypt.

Wait a minute, helping George Zimmerman and helping cause BENGHAZIII!!!!1!1 in the same sentence? Holy burning holy books, Pastor Terry Jones, that is something. Even in Florida.