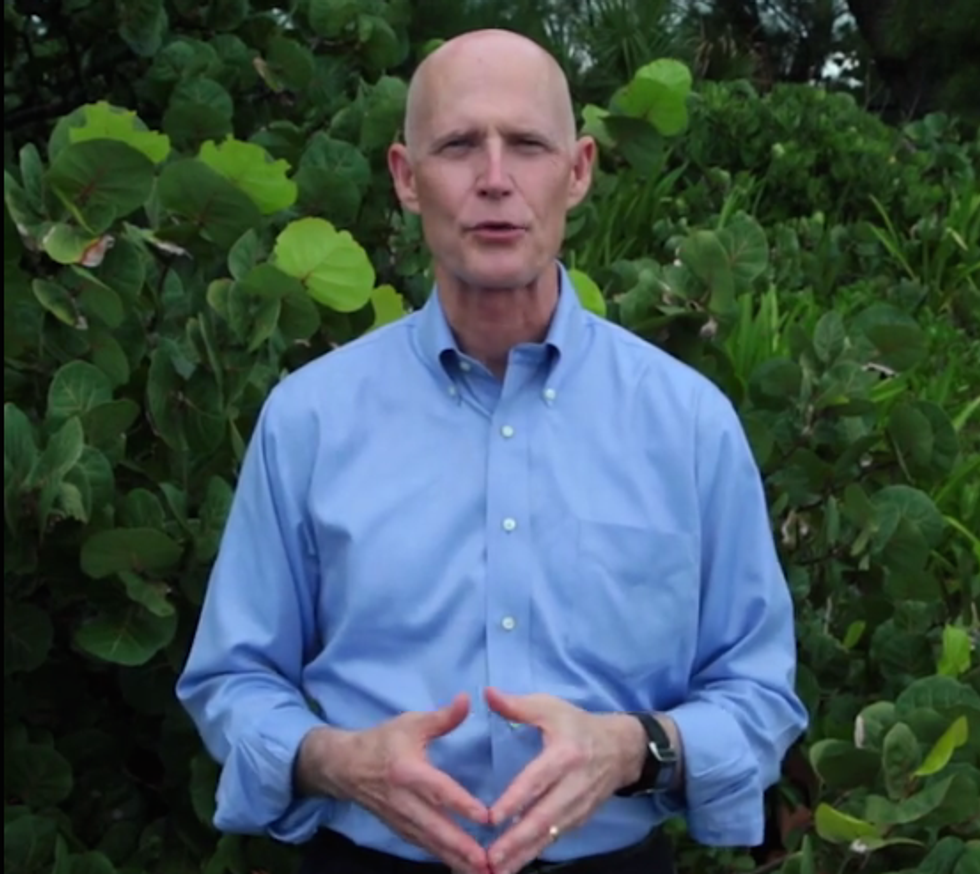 Florida Gov. Rick Scott (R-Heartless Bastard) was against Medicaid expansion before he was for it, but now he's back to being against it. Really against it. Of course he still wants federal dollars for his state's own version of providing health care to low-income patients, but he'll be goddamned if he's going to let Obama tyrannize him into taking icky Obamacare dollars. And that is why he will SEE YOU IN COURT, Obama administration:

"It is appalling that President (Barack) Obama would cut off federal health care dollars to Florida in an effort to force our state further into Obamacare," Scott said in a statement. [...]

The agency targeted by the lawsuit — the U.S. Centers for Medicare and Medicaid Services, or CMS — is still deciding whether to renew a $2.2 billion program called the Low Income Pool that helps Florida hospitals treat low-income patients. And if no LIP dollars are awarded, Florida could be looking at a $1.3 billion budget gap.

The LIP was set to expire in June, but now Rick Scott is saying that if Florida does not get an extension, that is the same kind of "coercion" by President Obama as putting Rick Scott in a FEMA camp (a FEMA camp made of free-to-the-states health care for the low-income-but-not-poor). Hey, you know what would resolve this problem for Florida, by giving it sweet federal dollars and providing health care to the state's low-income residents? It's this crazy thing called the Affordable Care Act, and it would cover an additional 800,000 Floridians. Easy-peasy. But nope, the governor doesn't want that kind of federal money, because states' rights or whateverthefuck, just the other kind of federal money, because that is different.

Gov. Scott isn't just a jerk, though; he's also A Idiot. Because sending low-income patients to hospitals for health care is not the most fiscally conservative method. Which is why hospitals have saved billions of dollars in states that have expanded Medicaid, as the White House reminded us last month:

A massive expansion of insurance programs like Medicaid and a drop in emergency room visits saved hospitals at least $7.4 billion over the last year, the Obama administration announced[.]

Ya see, if those low-income patients can enroll in Medicaid and go to doctors for non-emergency medical care, the patients get the care they need -- and do not DIE from preventable illnesses -- and hospitals save money, and the state saves money, and everybody wins. But oh hell no, can't have that in Florida. So the state will now spend more extra money it does not actually have lying around, on a lawsuit to make the government keep funding a program, which expires in June and is not as good or as cost-saving as JUST EXPANDING MEDICAID THROUGH OBAMACARE.

The White House resisted the urge to respond to Scott's threatened lawsuit with a huge groan, instead pointing out that, um, Florida could resolve this issue quite easily, HELLO and DUH:

White House press secretary Josh Earnest said he hadn't seen the details of the lawsuit, but said expanding Medicaid would ensure that 800,000 Floridians get access to health care coverage.

"So there's not a good reason why anybody in Florida would be in a situation of trying to block a policy that would benefit 800,000 Floridians," he said.

But au contraire Mr. Earnest, there IS a good reason. See, if Gov. Scott reverses his position yet again and gives in to the president's coercive tactics, he just might have to admit that Obamacare is GREAT for Florida after all, and NOT the worst thing that ever happened to America. And we certainly can't have that.