For Trump So Loved The Poor That He Made Many, Many More Of Them 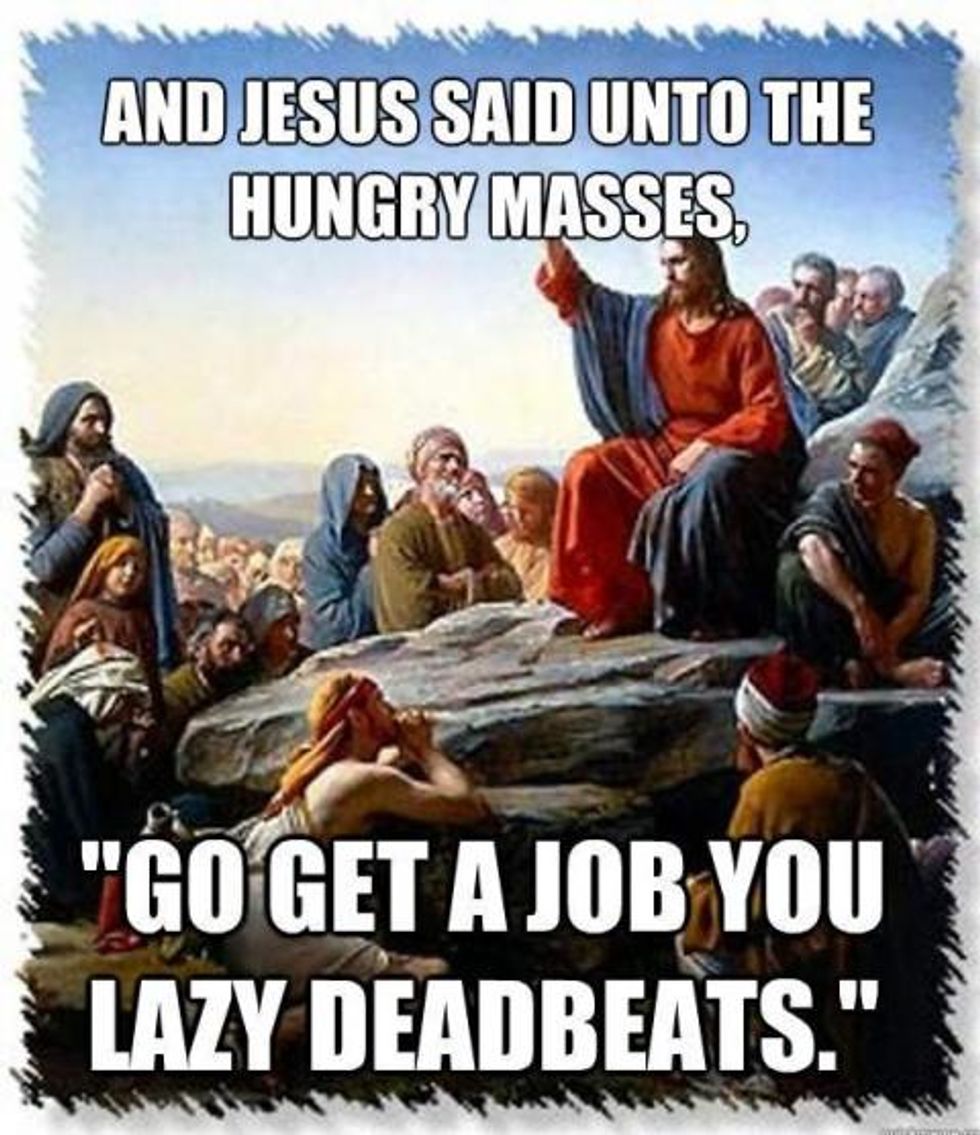 Now if you'll excuse Me, I've got some adulteresses to stone.

Last week, without any big public signing ceremony or hoopla, Donald Trump very quietly signed an executive order directing all federal programs that provide means-tested assistance to the poor to start finding ways to impose work requirements -- because, honestly, didn't we all get the angry comments after the election telling all us lazy liberals, who are all on welfare, there'd be no more free ride for bloggers, fast food workers with three jobs, and other layabouts?

Guy Starting Work At 1:30 PM Today Wants Medicaid Poors To Get Off Their Fat Asses

Everything about work requirements for Medicaid is terrible -- and most Medicaid recipients ALREADY WORK.

The new executive order is a follow-up to last year's beautiful poor-fucking budget proposal that promised big cuts in government assistance to poors, and builds on January's announcement that states could, if they wanted, start requiring non-disabled adult Medicaid recipients to get jobs or lose their benefits. Apparently the results in the few states where such programs were put in place have been so hugely successful -- in just a couple of months!! -- that Trump now wants to implement them nationally.

Now, if you want to get all snotty and start including facts like a damn liberal smartypants, we might note that the majority of people on government assistance who can work are already working -- about 60 percent of those receiving Medicaid, according to the Kaiser Family Foundation. And 80 percent of Medicaid recipients are in a household where at least one person is employed. As Kaiser Family Foundation researcher Diane Rowland explained this weekend on NPR, a big part of the push for Medicaid work requirements has been driven by a new evolution of the welfare queen myth, in reaction to the expansion of Medicaid under the Affordable Care Act:

They coined the phrase "able-bodied adults," which has now sort of stuck as these are people who should be out working and aren't. But the reality is that most of them are working. And it's really become sort of a stalking horse for repealing the Affordable Care's expansion of Medicaid to more adults.

The problem, says Valerie Wilson of the Economic Policy Institute's Program on Race, Ethnicity and the Economy, isn't that people receiving benefits aren't working. It's that low-wage work is low-wage work, and that low-wage jobs don't have health benefits. Imagine that!

Wilson said low-wage workers are working more hours now than they did nearly 40 years ago.

“The problem is that their jobs don’t pay enough,” she said. “People who are on public assistance and don’t work are not choosing between a six-figure salary or staying at home. Taking a low-paying job gets no one closer to economic stability.”

But extending work requirements to all means-tested programs will mean a lot more hoops for poor people to jump through, and many will lose benefits. That means nice well-off Fox viewers won't be forced to inspect other people's shopping carts and stare to see what kind of card they pay with, which will surely reduce stress for Fox News viewers. Some might even have enough time to become entrepreneurs!

And the fun's only starting! Republican Congressman Jim Jordan from Ohio, a co-founder of the Freedom Cockers, has all kinds of neat ideas for putting the screws to lazy poor people, if he can find any:

like tightening the window individuals have to find a job from three months to one month, increasing the number of hours they have to work per month from 80 hours to 100, and extending the requirements to able-bodied adults with dependents.

Can actual workhouses be far behind? Truly, the days when being poor was just an endless parade of food stamp lobster and a new Cadillac every year are over. Next, they may even start taxing all the money liberals get from George Soros to promote socialism on Twitter all day.

Yr Wonkette is supported by reader donations. Please click here to send us some money, but not so much that we get lazy.