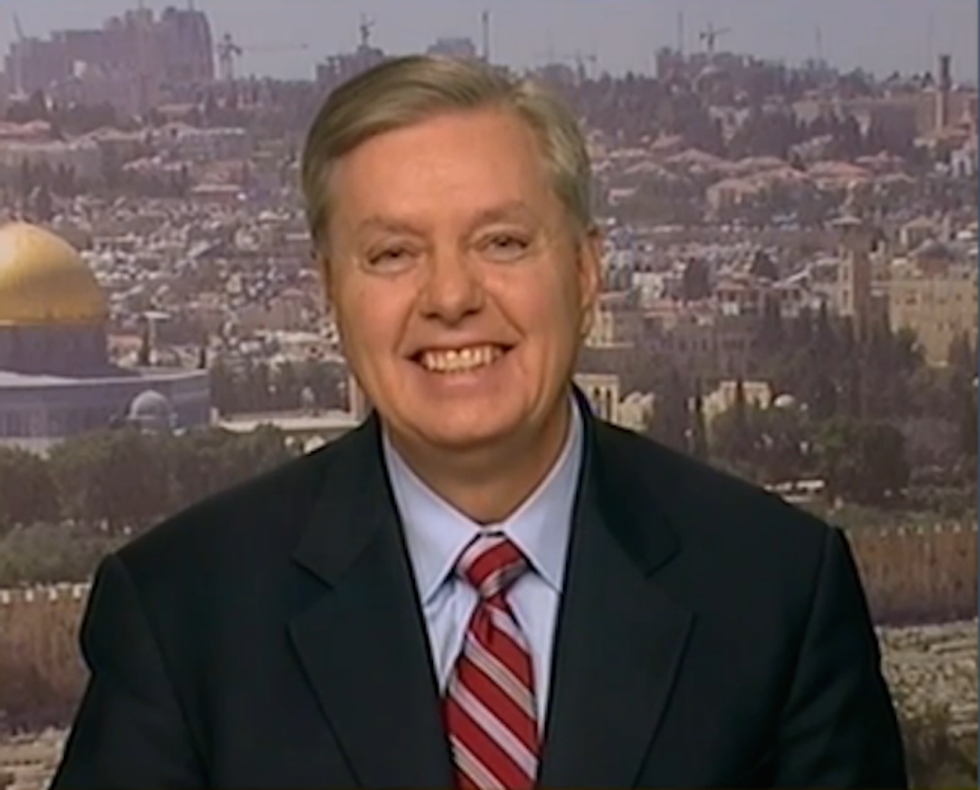 Southern gentleman and South Carolina Sen. Lindsey Graham appeared on "Meet the Press" on Sunday -- guess John McCain was busy blah blahing on all the other Sunday shows -- to say that he is definitely considering running for president if he can find enough rich white men to vote him into office. (Nope, he cannot. But he already knows that, on account of how he said so in 2012, when, in an odd moment of honesty he confessed that his beloved Grand Ol' Party is "not generating enough angry white guys to stay in business for the long term.")

Chuck Todd opened the conversation with an ew gross “joke” McCain made about “his illegitimate son” running for president, and no, we don’t know what the hell that’s supposed to mean, and no, we don’t even want to know. But according to Graham, "The good news is, I guess I’m in John’s will, and I can get part of the estate." He might want to take that up with Cindy McCain, since she's the one with all the money.

As to whether Graham is actually serious about this whole running for president -- and yes please, we sure hope he is, because he'd be a nice addition to the already crowded 2016 GOP primary clusterfuck of crazy -- well, chuckle chuckle ha ha, maybe he is!

We’re not polling, but we set up a testing-the-waters committee under the IRS code that would allow me to look beyond South Carolina as to whether or not a guy like Lindsey Graham has a viable path.

Allow us to answer that for you, Lindsey Graham: No. No, there is no viable path for a guy like Lindsey Graham. Not even if Cindy lets John leave you all that sweet beer money.

So, why would Lindsey Graham make a good president? Besides his off-the-record insistence last year that "the government’s so fucked up," which is actually a pretty good pitch to the American voters, and we totally would buy all the bumper stickers that say "Graham 2016: For A Fucked-Up America."

I think the world is falling apart, and I’ve been more right than wrong when it comes to foreign policy, but we’ll see.

Hmm, yes, Graham sure has been vindicated on his foreign policy derp. Why, just a week ago, Graham was telling Fox "News" that we'd totally be kicking some terrorist ass if only President Obama would follow the lead of Egyptian dictator al-Sisi and call our War on Terra a "religious war" and start bombing all the radical Islamic Islamists everywhere, like George Bush did. And he was right about that, even though Fox itself had to apologize (eventually) for getting everything wrong about The Muslim Threat -- again.

Still, as with all of the Republican contenders hoping to be the guy who loses to Hillary Clinton in 2016, we wish Lindsey Graham the best of luck with that running for president thing. Or at least weaseling his way into Daddy John's will.