Former Arizona Gov. Jan Brewer Has A Message To Share, And It Is #BrosBeforeHos 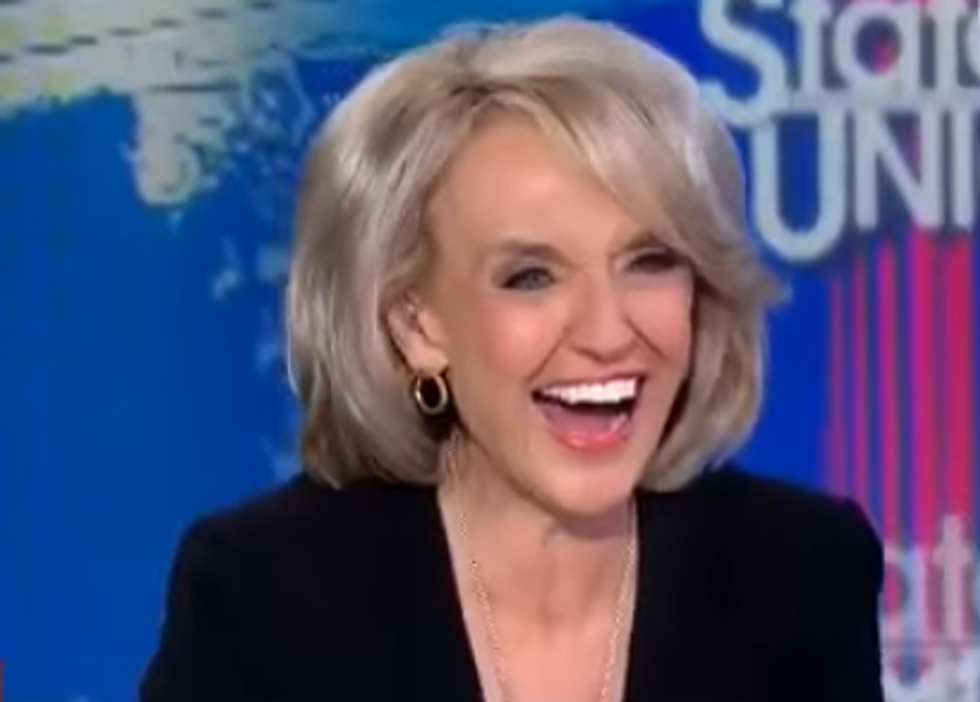 Off her meds again? Maybe.

Oh thank God, former Arizona governor Jan Brewer has crept out of whatever xenophobic dungeon of severed heads and trash she lives in, to comment on the 2016 election. And wouldn't you know, she's just tired of people focusing on whether Trump's running mate should be some stinkin' lady, because shouldn't he just pick the (dude) person who is the best (penis-having) candidate? Ugh, let her tell you her business:

BREWER: Of course, I would be — I would be willing to serve in any capacity that I could be of help with Donald on.

JAKE TAPPER: Do you think he needs to pick a woman? Given how bad his numbers are with women.

BREWER: I don’t necessarily think you need to pick a woman. You know, this woman thing has gotten way out of control I believe. And I think it’s been driven by the left. Because they think that it’s going to bring them over the end. But I think people, when they sit down to vote, they vote for the very best candidate. They want somebody that’s going to represent them.

That's true, in a sort of way! There are Democrats and other liberals who have been #FeelingTheBern because they think he's the best Democratic candidate, and there are millions of mentally deficient Americans like Brewer who are supporting Trump, and they are not even remotely thinking about whether those guys have a vag or some tits.

[wonkbar]<a href="http://wonkette.com/598026/sarah-palin-endorses-donald-trump-for-emperor-of-alaska-and-also-too-america"></a>[/wonkbar]But gahhhhh, why would anybody even suggest that maybe Donald Trump should pick a woman (like Sarah Palin, please Jesus, please!) as his running mate? It's not like women are over half the population or anything, and they certainly aren't insanely under-represented in government.

And it certainly wouldn't be smart in the strategery-type way, since the likely Democratic nominee is a lady, and as Jake Tapper mentioned, ladies fuckin' hate Donald Trump.

[wonkbar]<a href="http://wonkette.com/472712/arizona-governor-jan-brewer-owns-your-vag-but-penises-must-run-free"></a>[/wonkbar]But no, Jan Brewer things that is liberal and icky and EW YUCK. Of course, this is definitely not the first time Brewer, who may or may not be off her meds again, has taken the #BrosBeforeHos stance. Remember that time she vetoed a birther bill because it would require presidential (boy) candidates to show proof of their red-blooded American circumcision? Haha, that was funny, because at the same time, she was signing crazy abortion bans and laws to force transvaginal wanding on women who want abortions. Isn't that nice?

No it is not, because Jan Brewer is a dick.