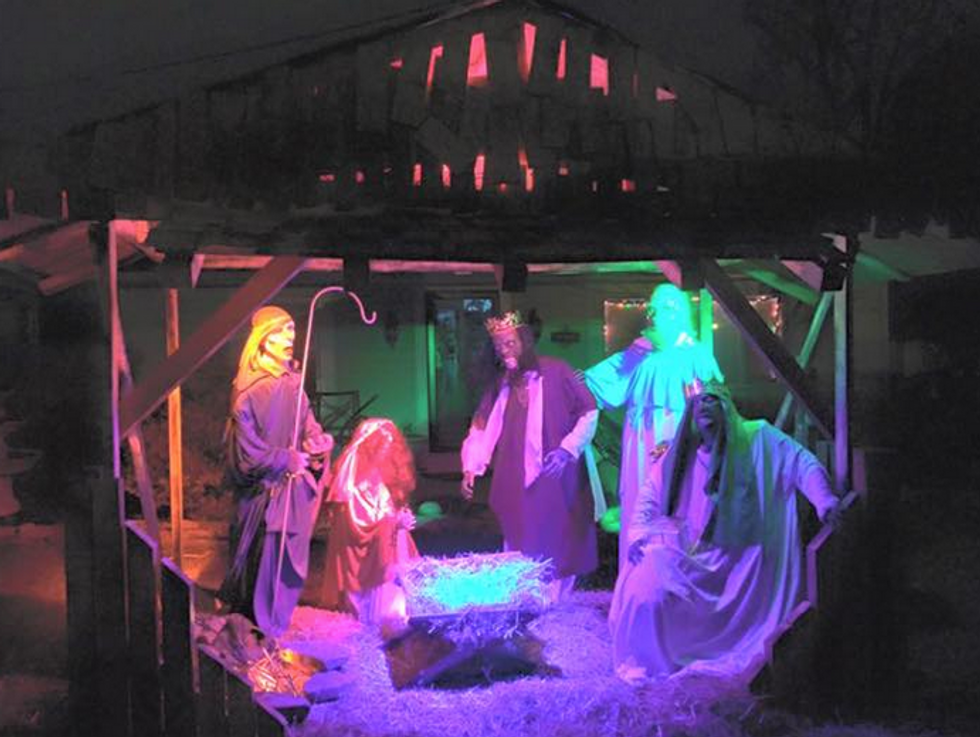 Have you heard about the zombies? Zombie Mary and Zombie Joseph and little Zombie Baby Jesus, away in a manger on some dude's lawn in Sycamore Township, Ohio? Yes, the Zombie Nativity Scene is a thing. Quite a thing! And it has the locals and town officials all het up because RUDE. And OFFENSIVE. And NOT FUNNY. And, as Fox Business host Lou Dobbs opined on his show Thursday, to some former pageant queen and current co-host on some late-night Fox News show, Joanne Nosuchinksy:

The zombie Christmas seems insensitive to me on the part of the couple who decided to do that. [...] I think if you're going to mock a religion, Joanne, I'm thinking they should have chosen the Islamic religion to see what would happen.

Sure, makes sense. As Sarah Palin learned us two Wars on Christmas ago, no one should take offense at "a plastic Jewish family on somebody’s lawn" -- and anyone who has a problem with that is aborting Christ from Christmas, fer moose poop's sake! --but a plastic Jewish zombie family is clearly another matter. Now Islam, boy, that's one of those HI-larious religions, full of all kinds of nutty stuff those kooks believe. Why not make some jokes about that, huh? Prove your testicular sack size by taunting The Muslims instead. At least they deserve it!

What do you think, Joanne?

There are just so many religions to choose from, and really, you should represent them all in your nativity display, if we really want to be an inclusive society.

Yeah. Real quote, in case you were smacking your forehead.

Joanne thinks this Zombie Nativity Scene creator, Jasen Dixon, deserves credit for his "entrepreneurial spirit" as well as his "Christmas spirit," because his day job is managing a haunted house called the "13 Rooms of Doom," so now it all makes sense, don't it? Besides, while the town has told him his to stop putting up his Zombie Christ family because he needs a permit -- and no, the town will not give him a permit -- he says some people like his display, and it's about "free speech," and he intends to give any donations he receives from approving fans to St. Jude, the children's cancer research hospital, and isn't that kind of generosity of heart and wallet the real reason for the season?

Merry War on Holidays, everyone.