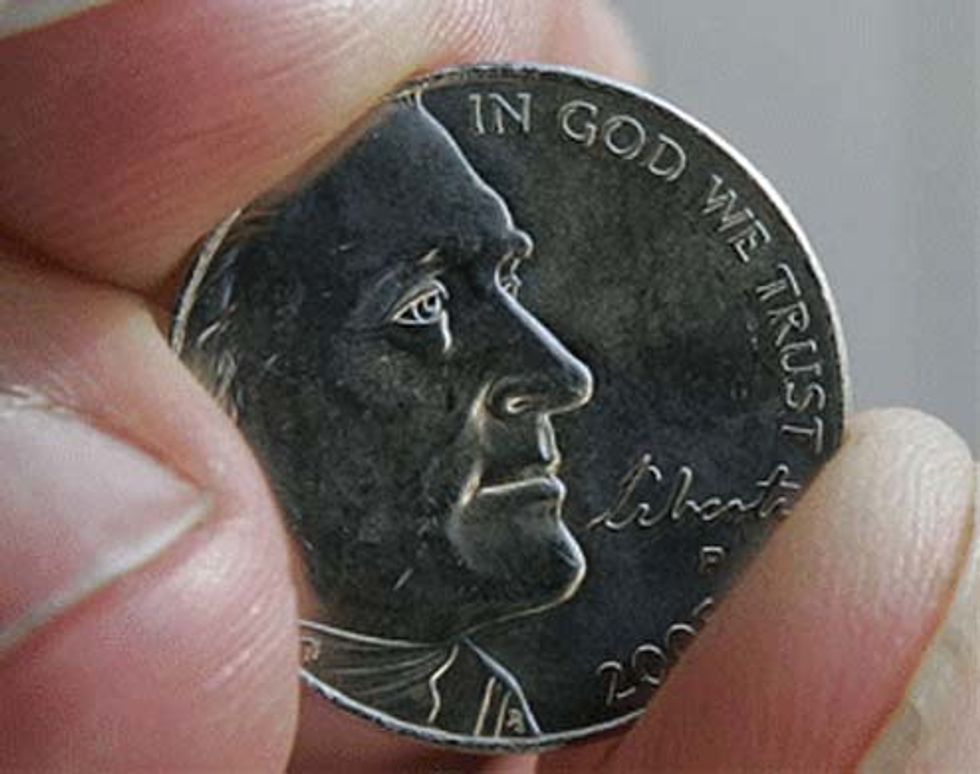 "Say," you're probably thinking. "That's a good-looking nickel. One of those saucy ones from 2005. You could use it to buy a piece of Double Bubble, or maybe you could put in the 'take a penny, leave a penny' tray at the gas station if you want to blow minds with your generosity." But that's no ordinary nickel; that's the most politically important metallic disc in the world, and it has personally ensured the crushing defeat of Barack Hussein Nobama at tonight's debate. BUT HOW COULD A MERE FIVE-CENT PIECE HAVE SUCH POWER???

If anyone ever tries to explain to you that both major parties are just front operations for the giant space-lizard conspiracy that rules the universe, you now have concrete evidence that in fact these guys hate each other's fucking guts, because instead of just having low-level staffers agree on minor bits of debate stagecraft, they have to flip that coin above to determine who goes first on every God-damned little thing. So Obama will enter from stage left and stand on the left side of the stage, Obama will be introduced first, Romney will take the first question, and Ann Romney will be introduced before Michelle Obama. Three of those four things were instances where Obama lost the coin toss and are therefore "bad" for him, somehow, we will let you guess which.

Anyway, this is obviously explained in a Fox Nation post entitled "Romney Smokes Obama In Pre-Debate Coin Tosses." Wonkette's Jesse Taylor will be live-blogging the debate from some kind of grilled cheese store tonight, but there's no point in tuning in because this coin has already anointed Romney president, sorry. [Fox Nation]