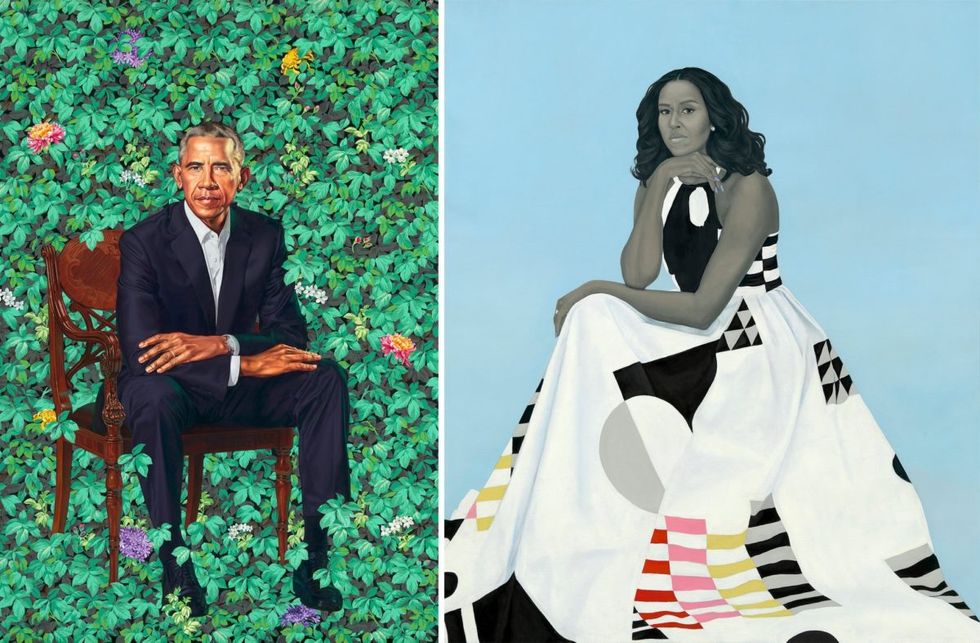 They're so divisive. (And gorgeous)

The official portraits of Barack and Michelle Obama were unveiled at the National Portrait Gallery, and by god we like 'em. Some people are griping because they aren't photorealistic depictions of Barry and Michelle, but that's exactly what we like about them. Kehinde Wiley's painting of President Obama actually puts him in a fairly traditional, if somewhat casual pose, no tie, but sitting in a chair looking like he's thinking of ... destroying America probably, or perhaps trying to figure out how he's going to save it, more like. Or maybe he's trying to recall the name of the bad guy in a Conan the Barbarian comic. He really is such a nerd.

Oh, but all that greenery! This is the president in a garden (or, strangely, hovering in one?), a president whose first lady was famous for her garden at the White House. Put him in the garden, then, in a green place that's as lush as his native Hawaii. We won't Freshman Art it to death, but damn, it's nice.

From the greenery sprout flowers that have symbolic meaning for the sitter. African blue lilies represent Kenya, his father’s birthplace; jasmine stands for Hawaii, where Mr. Obama himself was born; chrysanthemums, the official flower of Chicago, reference the city where his political career began, and where he met his wife.

And then there's Amy Sherald’s portrait of Michelle Obama, which at first seems muted, but then you start noticing the colors in the dress (a design by Michelle Smith, the NYT informs us couture dolts) and that pose that's as serious as a presidential portrait. More artsplaining:

Ms. Sherald also starts with realism, but softens and abstracts it. She gives all her figures gray-toned skin — a color with ambiguous racial associations — and reduces bodies to geometric forms silhouetted against single-color fields.

Yr Editrix, who IS an art critic, had this to say:

They're both gorgeous paintings, and we don't mind saying half of that is because we're taken by their subjects.

Ben Shapiro was classy as ever:

Noted aesthete Rush Limbaugh was thoroughly disgusted by the paintings and by liberals' reactions to them, because like a bunch of sheeple we're all saying we like them because we like the Obamas:

“Oh my God this is so wonderful!” A highly sarcastic Limbaugh said. “To have braininess back. To have intelligence, to have people we could be proud of!”

By way of counterpoint, Rush Limbaugh is a fucking idiot.

One more and we're out:

They are just saying, racist white people, THEY ARE JUST SAYING!

It's now your OPEN THREAD! Talk about art if you want! Or about something else! You know how this works.

Update: We would be remiss if we failed to include this essential Chicago perspective from Chris Hayes:

Yr Wonkette is supported by reader donations. Please click here to send us money, like a genuine patron of the arts. With dick jokes.