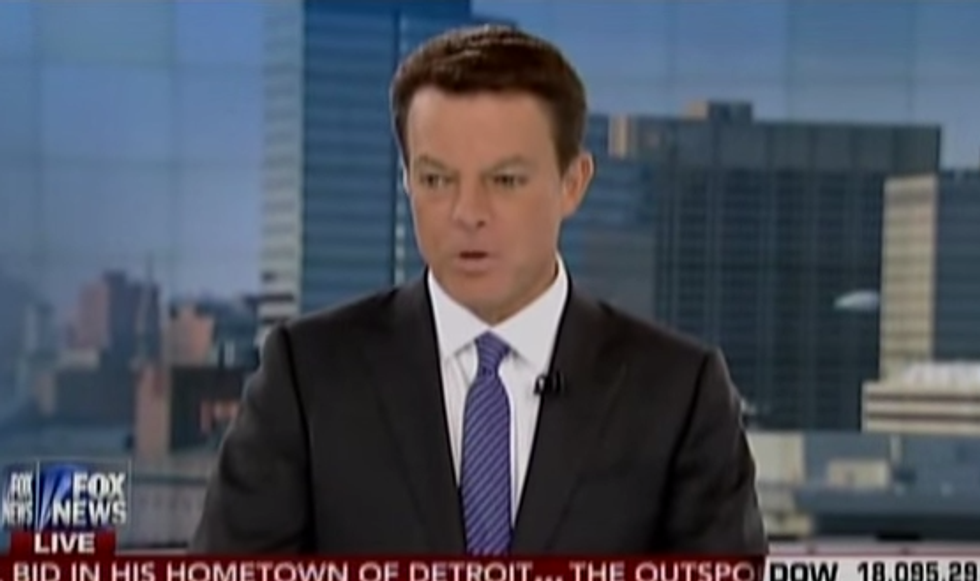 Journalism-ing is tough! You try to get it right, but sometimes, no matter how hard you try, you fuck up. Like you misspell the name of Iran's Ayatollah Khamenei (we did that the other day, doy!), or you report that you witnessed a black man getting shot by police in Baltimore, when what you actually witnessed was a black man NOT getting shot by the police! Fox News made this age-old mistake Monday, of seeing a man running and immediately breaking into a national newscast to report that the man had been gunned down by police, without first checking to see if the man had been gunned down at all. Oops! This is why we have editors, GUYS!

Fox News correspondent Mike Tobin said that he and his news crew witnessed what he described as a "young, black male" being shot by a police officer in Baltimore while running away on Monday afternoon.

Tobin described seeing the man run "right in front of us" and that he never saw the man turn.

"I was getting ready to do a live shot for my shift ... I was sitting in the car, scribbling on my notes for the next live shot, and he ran right in front of us," Tobin said. "I never saw the individual turn and do anything I would consider an aggressive act, but we did see the officer draw his weapon and I counted one gunshot."

Sounds scary! There was a man running! He didn't do anything wrong, but the po-po killed him dead! I SEEN IT!

Except no. That wasn't it at all. No one was shot. Fox anchor Shepard Smith had to come on a few minutes later to tell everybody that, OOOOOPS, Fox got it all wrong, and nobody got shot, and they are very sorry. But something definitely made that reporter jump! Maybe a car backfired? Maybe it wasn't reporter Mike Tobin at all, but rather Bill O'Reilly, out there on the street, having flashbacks to all the war correspondent work he never, in actuality, did? In the Falkland Islands, maybe?  Tell us the fake news about the other fake news, Shepard Smith:

"What's happened is we screwed up what it sounds like," Smith said. "I can tell you one thing, Mike Tobin would never — I've been through this. Mike Tobin thought he saw somebody get shot. And there was a gun. And there was a patient on a stretcher. And there was a woman who said she saw the cops gun him down and there's gonna be violence and all the rest of that. And what we have is nothing."

"Nobody has been shot," Smith said. "No police officer pulled the trigger."

Smith said the conditions were unusual and that the news crew had made an "honest" mistake.

The retraction came after Baltimore police flatly denied that a shooting had even taken place.

Whoops. Honest mistake. And surely they did everything they could to verify the story before going on air, oh wait, no they did not. Because during the earlier breaking BLACK MAN KILT DEAD BY PO-LICE report, Tobin and Shepard actually discussed, on air, whether they needed to do anything to verify the story, and decided no, because again, Tobin SEEN IT:

“And our producers in Baltimore say they saw a police officer shoot a man just moments ago,” said Smith. He followed that claim with some standard disclaimers about how Fox News “cannot frankly confirm what happened” even though he said Fox News personnel was right on the scene. “We’re hearing conflicting reports,” Smith also noted. Then he pitched the ball to Mike Tobin, the Fox News reporter on location. Here’s the journalism-school dimension of this story: Though Smith initially spoke of those “conflicting reports” and the need to confirm the event, Tobin brushed off such concerns by saying, “Well, Shep, we don’t have to worry that much about confirmation because it happened right in front of our eyes.”

Ha ha ha, they were already hearing "conflicting reports" even while they were reporting their BREAKING NEWS.

To be fair, Fox is on a bit of a learning curve when it comes to Doing News, since that's not really their primary objective in the first place. The order of priorities is: 1. Make cash for Rupert Murdoch. 2. Scare wingnuts. 3. Occasionally report a thing. And that's where they always fuck up.

Anyway, did you guys hear Dewey defeated Truman? They just said it, on the Fox!