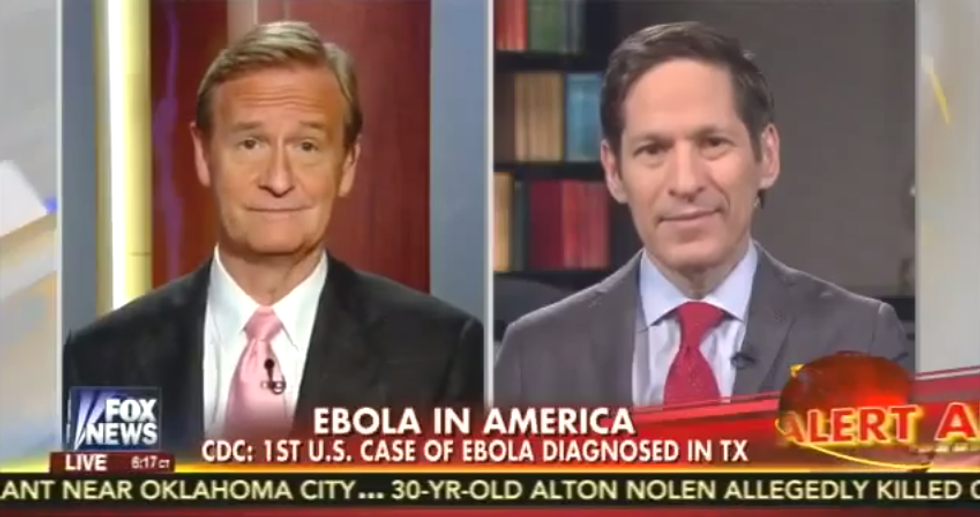 It's not as if we weren't warned that Barack Obama was planning to let in all the terrorists to infect us with Ebola. But in case convicted "journalist" James O'Keefe is not your main source of Ebola news, the Centers for Disease Control and Prevention confirmed Tuesday that a man in Dallas has been identified as the first person in America diagnosed with the disease.

CDC Director Thomas Frieden assured the country that they are absolutely on top of it and doing everything possible to ensure that the disease does not spread.

"The bottom line here is that I have no doubt that we will control this importation, or this case of Ebola, so that it does not spread widely in this country," Frieden said. "It is certainly possible that someone who had contact with this individual could develop Ebola in the coming weeks. But there is no doubt in my mind that we will stop it here."

For unskeptical Sheeple-Americans, that might be enough. But for the critical thinkers at Fox News, well, not so fast, Dr. Frieden -- if that even is your real name.

One other theme we got on the email, doctor, was this -- and this is a political thing, but you’re part of the administration. They feel that the administration has misled a lot of people on a lot of things. Why should we believe you when you’re telling us this stuff?

Sure. That's a fair question. For those people who send emails to Fox News, it's perfectly reasonable to assume that the head of the CDC is probably lying about this supposed Ebola patient, or the supposed plan to prevent it from spreading, or his supposed credentials, or whether President Obama did not secretly infiltrate the United States from his home country of Kenya specifically to kill us all with Ebola. Besides, even if Dr. Frieden isn't just outright lying about everything, since he is a part of the Obama administration, does he really know what he's talking about? Yes, he's a doctor and it's sort of his job to understand diseases and prevention of diseases -- as his title subtly implies -- but Doocy has another equally valid point of view that's pretty hard to dispute.

“I know you say the public does not need to worry about it,” Doocy said. “But I’ve got to tell you something, my daughter works in the building directly across the street from the hospital, and I talked to her last night. She’s a little freaked out.”

While Frieden claims that Doocy's daughter does not need to be freaked out because that is not how Ebola works, duh, what he isn't telling you is how this is all Obama's fault. Good thing Fox has a contributor on the payroll to fill in the gaps.

As Andrew Kirell at Mediaite noted, it took mere minutes for lady wingnut Katie Pavlich to connect the dots from Ebola to Obummer.

And in case that doesn't convince you, Stupidest Man on the Internet Jim Hoft has connected even more dots -- with a timeline!

Sept. 20 - Visitor arrives in Dallas, Texas. The city of Dallas says the patient moved to Dallas.

Sept. 26 – Man seeks care in Dallas but is sent home with antibiotics

Oct. 1 – Man is isolated and in serious condition – organs are failing.

What does it mean? Something, all right. Definitely something. We're not sure what, and neither is Hoft, and neither is Pavlich who is definitely not TOTALLY blaming Obama for doing Ebola to America, but give them time.

And in case you're worried about whether you are dying of Ebola RIGHT NOW, and you know better than to trust Obama lackey Dr. Frieden, remember that Ben Carson is a real doctor, and he will tell you the truth about Ebola and how to keep yourself safe from infected terrorist pee.