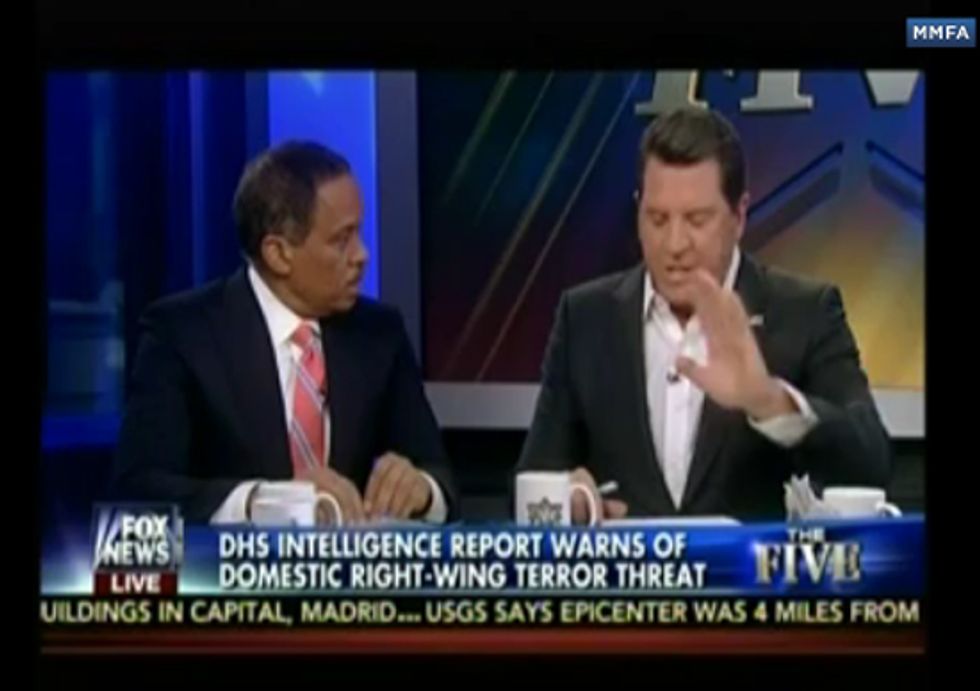 Fox News's The Fivehad a little memory problem Monday, accusing the Department of Homeland Security of completely imagining that rightwing extremists pose any threat to U.S. Americans, because as we all know, the only real terrorists are the Islamic ones. Most of the panel dismissed the DHS's recent report on the threat from "Sovereign Citizens" and other far-right groups as a pathetic attempt to avoid offending Muslims by pretending that anyone else does terrorism in U.S. America.

Greg Gutfeld explained that in looking for possible rightwing extremists, DHS was chasing after "nonexistent threats," like maybe "armed Lutherans laying siege on a Hot Topic in a mall? I don't think so!" (He is the group "comedian.") But then Juan Williams lost the script, noting that there were indeed domestic terrorists, too: "Oklahoma City? How about the Atlanta Olympic bomber?"

Eric Bolling -- he's the douchey ex-jock-looking one -- was on it: "You got two. You got two over four decades," which is rather interesting math for a "financial expert," since OKC was in 1995 and the Atlanta Olympics bombing was in 1996. We suppose that the other three attacks by Atlanta bomber Eric Rudolph -- two on abortion clinics and one on a gay nightclub -- don't actually count, since no one was killed. Of course, even "four over two decades" would only have included the examples Williams named.

Bolling then challenged Williams to give even a single example "from the last seven years" of a "rightwing or 'Christian Crusade'" terror attack, and Williams replied by citing the 2009 assassination of Dr. George Tiller: "I remember a doctor getting shot in his church..."

"An abortion clinic shooting, you're calling that a terrorist attack?" Bolling asked.

"What would you call it?" Williams countered.

"A lunatic who murdered someone," Bolling said.

Heck, a guy with an extremist religious agenda and a list of future targets isn't a terrorist, he's just a guy, right? And Bill O'Reilly repeatedly calling the victim "Tiller the Baby Killer" and comparing him to Joseph Mengele is just a war correspondent at work.

But since he asked, we can think of a few OTHER actual violent attacks by the very Sovereign Citizen types identified in the DHS reports. Because we've got plenty of examples, we generously will not include the patriots who pointed guns at federal agents during last year's Bundy Ranch standoff, terroristy though sighting on a law enforcement officer might seem:

No shots fired, no terrorism! Besides, they love America, just not its government.

On the other hand, we're pretty confident that Jerad and Amanda Miller, the sovereign citizen loons who murdered two cops and a civilian in Las Vegas, definitely count, what with their anti-tax, neo-Nazi, anti-police background -- even though Former Stupidest Man On the Internet Jim Hoft figured they were liberals, because Nazis are liberals.

Gee, if only we could find any other examples of Sovereign Citizen types doing terror in the last seven years. Or for that matter, the last year:

And those are only the actually violent ones. That Yr Wonkette covered. In 2014. If we go back a little further (but no farther than 2010) we can add to the list a bunch of fine folks -- not all of them using the sovereign citizen label, but not a one of them carrying around a copy of the Wonkette Guide To Liberal Living -- who are merely into grifting, threatening others with guns, making bombs and attempting to make poison gas, and getting themselves caught before they manage to kill anyone:

Frankly, we rushed that second list -- there's only so many crazies you can itemize. We've even left out a couple of the more famous ones that Wonkette didn't cover, like the 2008 shootings at the Knoxville Unitarian-Universalist Church by a guy who wanted to eliminate liberals, or Byron Williams, the Glenn Beck fan who got into a shootout with cops while trying to find the Tides Foundation so he could shoot it up.

Mind you, there's no connection between any of these events. Totally one-offs. A whole pack of lone wolves. And no, we're not saying that plain old vanilla conservatives are terrorists. Just that they seem not to notice any terrorists who don't scream "Allahu Akbar."

So, hey, Juan Williams, feel free to copy and paste those onto index cards for the next time the topic comes up. Just cite your sources, OK?