Fox News: If You'd Been Murdered Here, You'd Be Home By Now! 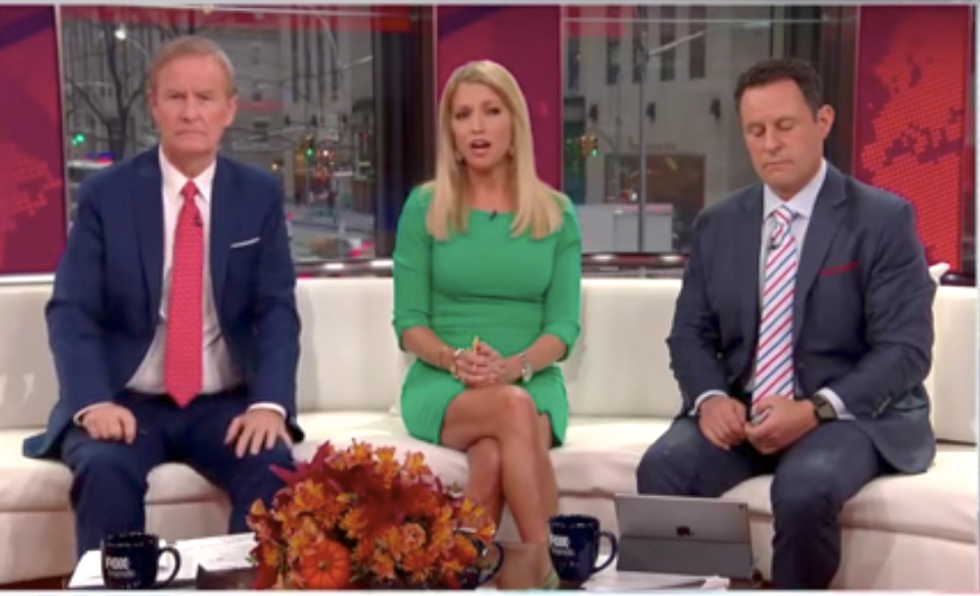 HOT TAKES PEOPLE! Were you wondering what the stupidest people in America have to say about our latest gun massacre? Don't worry, it wasn't about gun control. Because of course it's #TOO SOON to politicize this tragedy by talking about why the hell domestic abusers can still buy automatic weapons. But it's never too soon to start barfing out nonsense on your way to the Gunhumpers Supermart to buy another bump stock!

Take it away Fox News!

We’ve been reporting this shouldn’t happen in a church. But I was downstairs talking with some people that work here that we all talk about our faith and we share the same beliefs. We were saying there’s no other place we would want to go other than church. Because I’m there asking for forgiveness. I feel very close to Christ when I’m there. So, I’m trying to look at some positives here and know that those people are with the Lord now and experiencing eternity and no more suffering, no more sadness anymore.

Well, Ainsley Earhardt, many of us would like to die in bed at a ripe old age after a day spent playing with the grandbabies. But please, tell us the upside of this little girl getting shot in church because all her sins are forgiven now.

OR MAYBE YOU SHOULD TAKE YOUR BLEACH BLONDE HEAD OUT OF YOUR ASS!!! There are no "positives" here!

Texas Attorney General Ken Paxton knows the solution to this problem is more guns in church.

There's just something about children dying that devastates all of us. It breaks my heart. As far as what we can do in the future, the only thing I know is, because you can't necessarily keep guns out of the hands of people who are going to violate the law. If somebody's willing to kill someone, they're also going to be willing to violate a gun law.

Got it. Dead kids are sad, but gun laws are sadder.

I think, as we see, we've had shootings at churches, you know, forever. It's going to happen again, and so we need people in churches, either professional security or at least arming some of the parishioners or the congregation so that they can respond when something like this happens again.

Because when Jesus said, "Return your sword to its place. For all those who take up the sword shall perish by the sword," he meant that The Holy Spirit will protect all good Christians who honor Him by bringing a gun to church. Read your Bible, people!

And finally, no Lunatics Round Up is complete without a visit from the nation's racist uncle.

Do we have a climate of death in this country? What is going on? We understand a lot of these shootings, the people involved have been taking antidepressant drugs, and that may well be the causative factor, but something is going on.

Why, yes, Pappy! We DO have a culture of death in the United States! No other country on earth would allow 13,000 of its citizens to die every year (that's the 33,000 annual gun deaths minus the 20,000 gun suicides) and pretend that we are all somehow "safer" because of it. But, you were saying.

But I hope and pray they don't politicize this thing and start talking about gun control and all that because it won't be necessary. But I do think there's got to be a thorough investigation into the effect of antidepressants on these [inaudible]. And they've been so many of these mass killings and almost every one, as I said before, has had some nexus to antidepressants. So, we need to see what we are giving people. But my goodness, our prayers are with those people from that small community in Texas.

FUN FACT: 13% of the country takes anti-depressants, and a minuscule percent of them shoot people. But obviously anti-depressants are a "causative factor." Meanwhile, 100% of mass shooters use guns. But guns are NOT a causative factive because ... well because Pat Robertson said so. And he and Jesus are like this. So don't politicize this, you fucking heathens! Maybe if you prayed harder, God would cure your depression.

So, to recap. The victims were lucky to be shot in church near Jesus. And it's a shame there weren't more good guys with guns in the pews to take out this guy who was hopped up on antidepressants. And we should never pass gun control laws because bad guys will always find a way to get guns, just like they do in every other developed nation where this never happens.

JESUS. THERE ISN'T ENOUGH ZOLOFT IN THE WORLD FOR THIS HORROR SHOW.

Please contribute to the Wonkette fund for Sarafem, Lexapro, and Luvox. Also, servers and salaries.