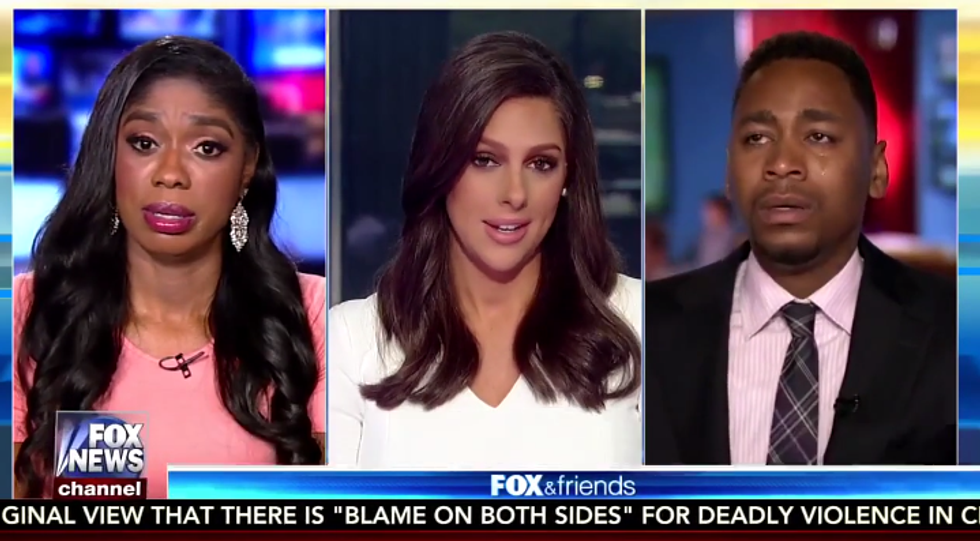 Talking about confederate statues makes her grinny, we guess.

Guys, we've been shitting on Fox News all week. (And it feels GREAT, thanks for asking!) As sane and good and loving people on BOTH sides of the aisle have spent the week reaching around to each other in love, horrified by what happened in Charlottesville this past weekend, Fox News has obviously been taking its talking points directly from the White Supremacist-In-Chief, who is more concerned about how the Nazis in Charlottesville, many of them just TREMENDOUS people, had a permit for their protest. Also, won't somebody think of the poor put-upon lovers of confederate statues, even if they happen to be Nazis? WON'T SOMEBODY THINK OF THEIR FEELINGS?

We had "Fox & Friends" taking pity on poor Donald Trump, who has been having a car repeatedly and figuratively slammed into him by the Fake News Media, which just can't stop criticizing him for his poor responses to the tragedy. We had Jesse Watters waxing poetic about how un-racist America is, then immediately scaring his fans by showing them pictures of Maxine Waters and Susan Rice dressed like normal. We had Tucker Carlson bellyaching about how the REAL RACISTS are those mean lefties who LITERALLY BUT NOT LITERALLY lynch those poor Nazis every time they racistly oppose the Nazis' racism. Fox News has been in rare form this week, even for Fox News.

And lord, we haven't even had a chance to see what bigoted meat farts have been coming out of Sean Hannity's mouth!

But right now, it is "Fox & Friends" person Abby Huntsman's turn. Watch as she speaks to two black guests, Wendy Osefo and Gianno Caldwell. As the Daily Beast notes, Huntsman thinks Caldwell, a Republican, will help a buddy out and argue from the racist right-wing side of things and talk about how UNFAIR it is that mean liberals want to take away the (wholly made-up) heritage of Confederate Fuckwaffle-Americans, by tearing down their loser heroes' statues. Instead, both Osefo and Caldwell spend the segment tearing up, appalled and hurt by the actions of these LITERAL FUCKING NAZIS and Donald Trump's cozy response to them, while Huntsman sits in the middle smirking and begging them to talk about statues. Through their tears, you can almost hear her guests say, "Stop trying to make statues happen, ABBY! Statues are never ever going to fucking happen, ABBY."

WENDY OSEFO: It’s beyond a monument. This is about hatred. This is about white supremacy. And to have Heather Heyer killed on U.S. soil by Nazis, Deandre Harris beaten and bludgeoned by Nazis. This is not talking points here, this is not partisanship, this is human life. And as a mother to hear the president of these United States not sit here and condemn what has happened, as a black woman of two black boys, my heart bleeds. This is not talking points here. This is personal. We as a nation, as a country, have to do better.

ABBY HUNTSMAN: Gianno, do you agree with that? Do you think, I mean, there are good people on BOTH SIDES of this debate, we talk about keeping these statues up, people I talk to say, "this is about history." How do we move forward, how do we learn from those mistakes if we just tear everything down?

GIANNO CALDWELL, NOT HAVING IT: I come today with a very heavy heart. Last night, I couldn't sleep at all, because President Trump, our president, has literally betrayed the conscience of our country. The very moral fabric in which we've made progress when it comes to race relations in America. He's failed us ...

[At this point Abby Huntsman makes what can only be described as "a noise" offscreen.]

... and it's very unfortunate that our president would say things like he did in that press conference ... when he says, "well there's good people on the side of the Nazis. They're not all Nazis. They're not all white supremacists." Mr. President! Good people don't pal around with Nazis and white supremacists. Maybe they don't consider themselves white supremacists and Nazis, but certainly they hold those views. This has become very troubling, and for anyone to come on any network and defend what President did and said at that press conference yesterday, is completely lost and [has] the potential to be morally bankrupt.

[At this point Abby Huntsman says, "NO!" from offscreen, presumably because she is lost and morally bankrupt.]

Let us cut in here, because to be clear, both guests were choked up or crying at this point. And that was the moment Huntsman took back over and said it's awesome how these people are coming on TV and keepin' it real with her, and she assured them it's OK to be emotional, but CAN YOU STOP YOUR CRYING SO WE CAN HAVE STATUE-CHAT?

Here's the splitscreen right at that moment:

If you need to walk outside on your front porch and yell mean words about Abby Huntsman at a flock of birds or something, go take a minute, OK?

You know, it's one thing when Tucker Carlson, who is such a pussy racist he probably decides he "doesn't have to pee anymore" any time a black dude enters a public restroom he's in, sits there and spews racism all by himself at a TV camera. But it's another thing for Abby Huntsman just to sit there and refuse to listen to the real actual people on her show, who are LITERALLY CRYING, and yet insist on sticking to the Trump-approved talking points her bosses told her to say.

CHRIST, what an asshole.

Wonkette salaries are fully funded by lovely people like you! If you love us, click below to fund us!