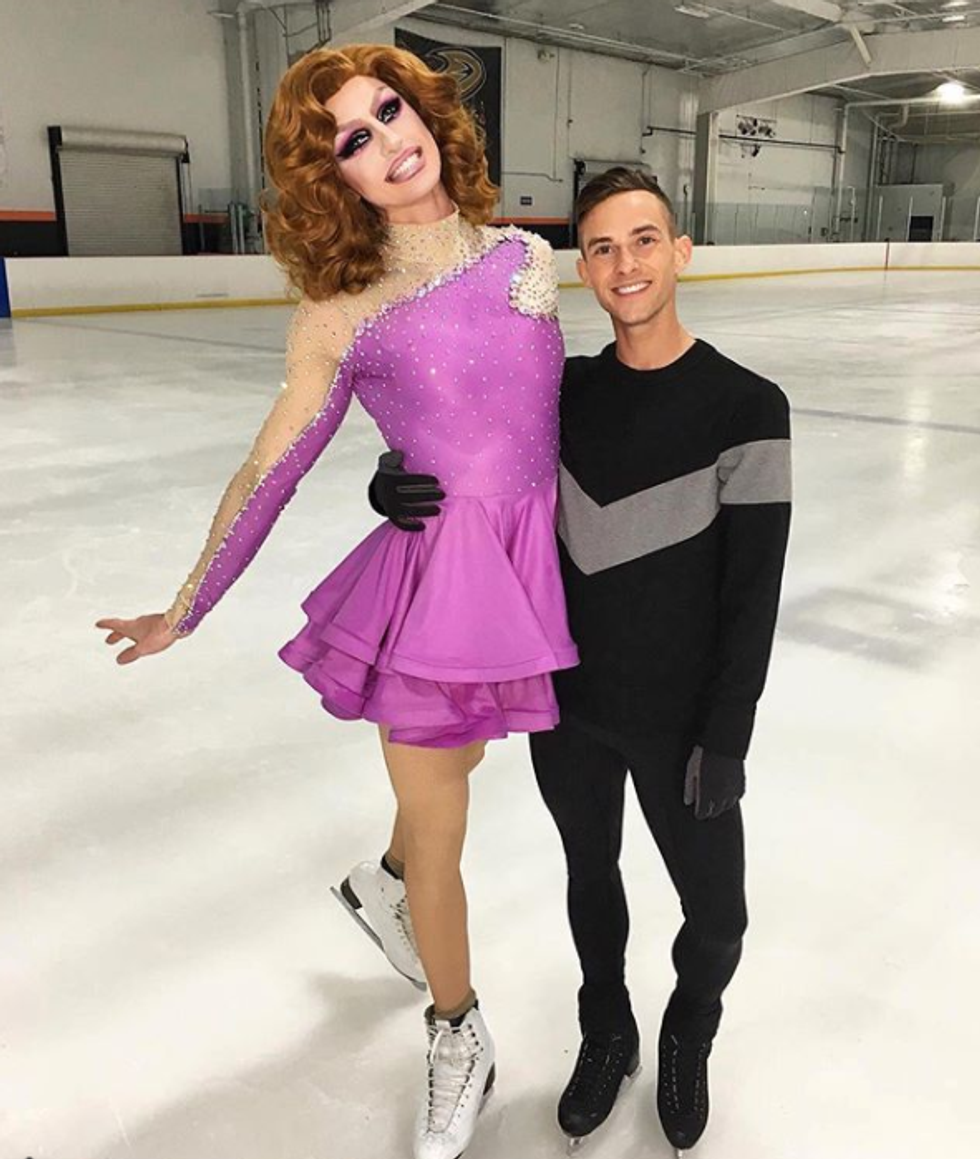 Fox News is having a moment, y'all. No, we're not talking about how they've launched three new ridiculous and easily debunked conspiracy theories this week to obstruct justice for Donald Trump in the Russia probes. The Winter Olympics have just begun in Pyeongchang, South Korea, and Fox News really wants to watch, but UGH, there are all these gross gay and black athletes and how will America even win medals if there are too many blacks and gays?

Show us on the doll where the US Olympic team touched you, Fox News executive VP John Moody:

Unless it’s changed overnight, the motto of the Olympics, since 1894, has been “Faster, Higher, Stronger.” It appears the U.S. Olympic Committee would like to change that to “Darker, Gayer, Different.” If your goal is to win medals, that won’t work.

Can gays even figure skate? Pffffffffffft!

A USOC official was quoted this week expressing pride (what else?) ...

PRIDE IS FOR FAGS.

... about taking the most diverse U.S. squad ever to the Winter Olympics.

Like come on, this is the WINTER olympics, OK? Are minorities even aware of snow, which is white?

That was followed by a, frankly, embarrassing laundry list of how many African-Americans, Asians and openly gay athletes are on this year’s U.S. team.

How embarrassing! It's fine if blacks and Asians and gays want to try to hobble down a bunny slope sometime -- not at the ski resort where John Moody likes to go, please -- but do they have to flaunt their GAY BLACK ASIATIC LIFESTYLES? (By the way, here is a great article about Winter Olympians doing JUST THAT, because they are awesome.)

No sport that we are aware of awards points – or medals – for skin color or sexual orientation.

Even worse, none of them award bonus points for being heterosexual, white and male!

GOOD QUESTION: Do American Olympic hopefuls have to be good at sports, or can they just say "I am the blackest and gayest person in ALL THE LAND"? Is that how one gets on the bobsled team? John Moody would like to know. He's not gonna Google it for his damn self though, because come on, he's a Fox News idiot.

Some breakthroughs in American sports were historic, none more so than Jackie Robinson’s in baseball.

John Moody knows about a black athlete who was good, therefore John Moody is not racist.

But Robinson didn’t make the Majors because he was black. His legendary career occurred in an age of outright racial discrimination, because he was better at the game than almost everyone around him.

Unlike US olympians in 2018, who are too busy being gay and black to even play sports.

As my Fox News colleague Ed Henry wrote in his excellent book ...

The same Ed Henry currently flogging a conspiracy about how Democratic Senator Mark Warner was caught DOING HIS JOB in the Russia investigation? That guy? Fuck you.

Jeremy Lin, who played basketball at Harvard before joining the New York Knicks, did not become a media hero ... due to his Chinese heritage, but because he almost single-handedly turned around the struggling Knicks in 2012 ...

Back in 1993, when, it seems, America still had a sense of humor, the movie “Cool Runnings” portrayed a Jamaican bobsled team ...

John Moody has seen a movie about Jamaicans.

Insisting that sports bow to political correctness by assigning teams quotas for race, religion or sexuality is like saying that professional basketball goals will be worth four points if achieved by a minority in that sport – white guys, for instance – instead of the two or three points awarded to black players, who make up 81 percent of the NBA. Any plans to fix that disparity? Didn’t think so.

WHAT. FUCKING. QUOTAS? What the hell is wrong with this dipshit?

The article Moody cites in the Washington Post, the one that made him SO MAD because the US Olympic Committee (USOC) spokesperson was proud (LIKE A GAY) there was so much diversity this year, specifically noted that the US team, like most teams in the Winter Olympics, is overwhelmingly white. (There are many reasons for this, and most of them have to do with racism, class, and access to winter sports.) Indeed, out of 243 American athletes this year, according to WaPo, "10 are African American — 4 percent — and another 10 are Asian American." And there are a couple of openly gay competitors.

That is the marauding influx of homoblackinese athletes that led Fox News fuckwhistle John Moody to write this article.

It's not that John Moody wants the Olympics to be prejudiced, mind you. BUT:

Complaining that every team isn’t a rainbow of political correctness defeats the purpose of sports, which is competition. At the Olympic level, not everyone is a winner. Not everyone gets a little plastic trophy to take home.

No participation trophies for gaywads and blacks, we got it.

Apropos of nothing, Pita Taufatofua, that hot shirtless guy from Tonga who broke the 2016 Rio Summer Olympics with his body, is back this year, and he's STILL NEKKID:

Put some earmuffs on your sex nipples, Pita! The Winter Olympics is cooooooold.

And we already told you about openly gay figure skater Adam Rippon, who's made Olympic news without even landing a triple axel, by rejecting Mike Pence's sad begging for a little alone time in Pyeongchang:

Put some earmuffs on your sex nipples, Adam Rippon! The Winter Olympics is coooooooold!

Oh man, we bet John Moody is triggered and aroused and angered and titillated by those pictures.