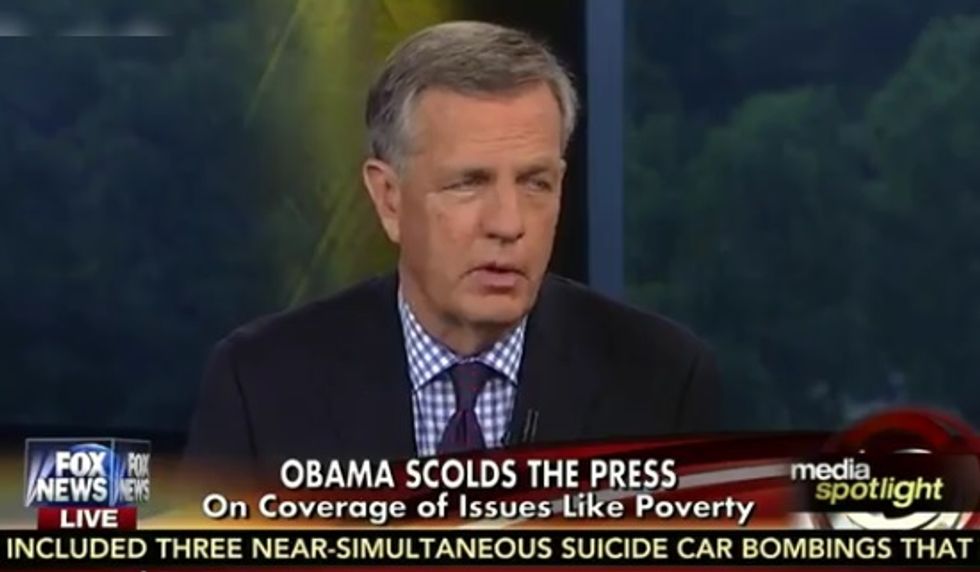 The Fox News Nuh-Uh Squad continues its response to President Obama's cruel assertion that Fox portrays poor people as lazy leeches who sponge off government benefits. On Sunday's MediaBuzz, Howard Kurtz and Brit Hume had a little chat about Obama's latest assault on the defenseless cable network, and they agreed that Fox doesn't portray the poor unfairly, because when Fox viewers think of poor people, they think of exactly the kind of poor people Fox shows, so there, and it's unfair for the president to single Fox out like that, especially when he fails to acknowledge that it's the poor's fault that they're poor.

Kurtz and Hume began by saying that it's not the job of the media to fix America's problems with in-depth discussions of social problems like poverty. Instead, it's a side issue to breaking news about the Urbans and other disasters:

Hume: We're a news medium, and when all hell breaks loose in the inner city as it has in Baltimore, you're gonna get related coverage.

Kurtz: Everybody parachutes in, everybody says what are we going to do about urban poverty, racial tensions...

Hume: And that triggers discussion segments at some length on chat shows and elsewhere...

Kurtz: And then we move on, and when a train crashes and then we cover that.

Hume: That's what we do. That's the nature of the news business [...] We're not in the business of convening seminars for the purpose of advancing the president's agenda on this or that issue when they're not particularly in the news.

Yeah, Obama, stop trying to tell the media that they should be anything other than superficial. They have a business model, and it works.

Hume went on to explain that the real problem is Barack Obama's own myopia on the issue of poverty:

But I think it's... I also think that he has a particular viewpoint on these issues where you never hear him suggest that the people who live in these terrible conditions are in any way responsible for that by the choices they make.

Kurtz almost came close to playing Devil's Advocate, noting that Obama actually has "talked about fatherless families and family dysfunction, the culture, black culture," but Hume wasn't having any of that:

Yes, but he speaks of it as if, first on the one hand, what he says is, these conditions, these conditions, fatherless families, broken homes and the rest of it are a result of poverty and the conditions and not a cause of it. On the other hand he'll turn around and he did it in this presentation at Georgetown and talked about how the statistics on poverty are wrong because everything include... they don't include an array of benefits.

So on the one hand he's saying poverty's not all that bad and on the other hand he's saying, well, it's the cause of all these broken families. So he's... his own message is full of self-contradictions.

We're pretty sure we missed the part where Barack Obama ever said that "poverty's not that bad" -- Hume may be thinking of Fox's own reporting on how the poor have it pretty good, what with those fancy refrigerators, microwave ovens, and color TVs (not to mention the money for nothing and your chicks for free).

Hume, whose net worth is estimated to be about $4 million, was pretty sure that the really bad taker types are actually far more typical of the poor than Obama wants to own up to:

Hume: Well, first of all, the idea that, first of all I think there are more people of the kind that he says we point out than he is willing to admit. The second thing is...

Kurtz: By which you mean people who particularly don't want to work?

Hume: Because people don't particularly don't want to work or are badly affected by welfare dependency and the rest of it, or their dependence on government largess. But I don't think we spend a constant... I don't think we have a constant menu as he put it of that sort of thing.

You know, O'Reilly does segments, some of them tongue and cheek with Jesse Watters where he goes out and finds people who say, 'You know man, this is great, I'm living on, you know, the American government, I'm eating like a king,' and so on.

I just don't think we do that, so his obsession with our coverage of it seems to be misplaced. But it gets back to this: The idea that the people in these situations are simply victims, that's an idea that's deeply held with him and he doesn't look at the other side of the argument. He won't... he's not interested in it and he doesn't believe it.

KURTZ: There's another side to the argument and there should be a debate about that.

And thank goodness, Fox News will continue to be here to present the other side of the debate: Are the poors whooping it up like decadent European monarchs in days of yore, or are the poors simply partying like Columbian drug lords?