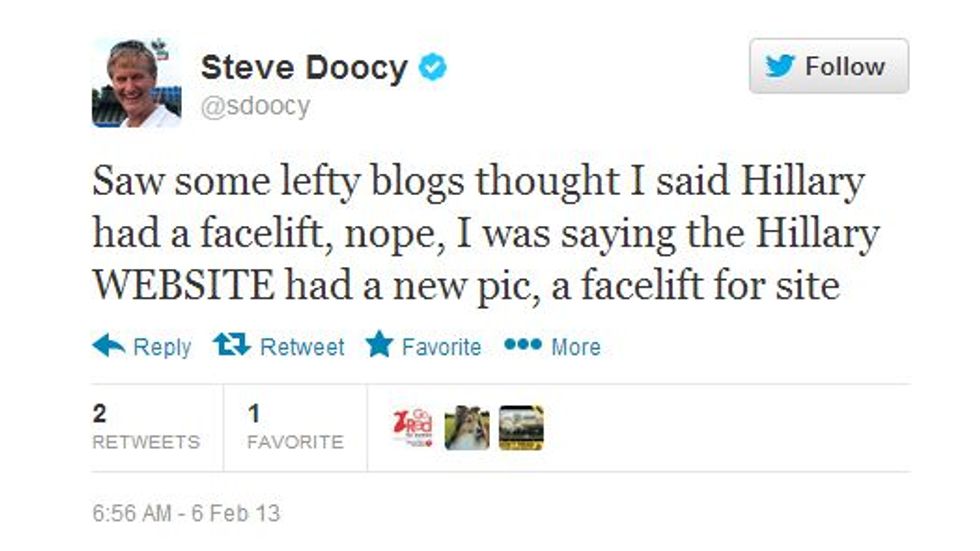 Today on Fox News, Steve Doocy's floating head was forced to say words about Hillary Clinton's possible run for President in 2016, because you know, get the fear out while it's hot, BENGHAZIIIII!!! And just what could make him think she is doing this most of all? Well, according to Steve Doocy at first, it was because there is a picture on a new website that makes him think she looks like she got a facelift? for her run at the highest job in the land. Because that is what a lady has to do. Rick Santorum can run with just any old face he wants, even HIS, and that is okay, but a lady must look pretty if she thinks people are going to look at her and let her be the boss of them.

But THEN Media Matters and maybe some other people wrote that he said this thing, and Steve turned to his twitter machine to call those lefty blogs out, for explaining reality!

Oh Steve Doocy, you are such a liar! Listen to yourself, you did not say anything about the site getting a lift — it's a brand new site! And anyway, it IS stupid to say she has had a facelift and shown it off on her shiny "Hillary's New Face for President" website, because incisions, bruising and swelling take weeks to heal, and we just saw her getting fired by Rand Paul quite recently! It is stupid to say. But you did, Steve Doocy. You did.

Perhaps THIS is the commitment to honesty that has made the Fox News Trustiness Ratings fall today, like a dog on Joe Biden's security detail team? Now even some of the people who WANT to believe you do not! You can say that President Obama is a Kenyan Muslim socialist all day long and they will lap it up, but do not tell them their Mitt is going to win and then not make it happen, you guys. This double-talking thing, with all the saying things and then un-saying them, maybe is getting thin. Maybe.

On the other hand, when that leads to Dick Morris getting fired and Dennis Kucinich getting hired, it is kind of worth it.