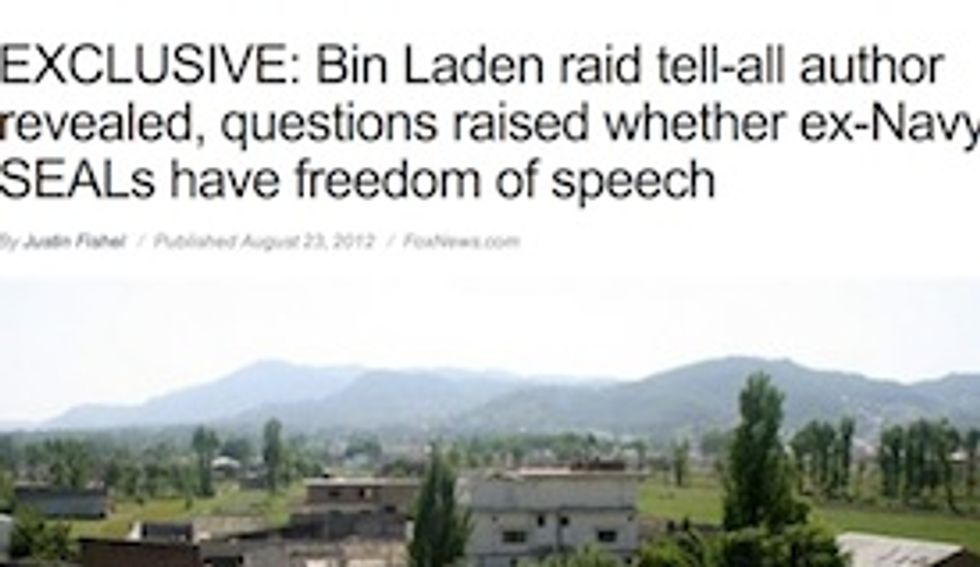 Fox News loves the troops, protects the troops, and will stand in the way of anyone who would hurt the troops and national security and the heartland and troop families, and such. Just last year, when New York's gay carnival blog Gawker tried to guess the name of the CIA's "Bin Laden Hunter," the outlet wastrashed and condemned on both the Fox News website and teevee channels forever and ever. That would be putting that HERO's life in danger! That was a year ago. Now did you hear that there's a member of SEAL Team 6 writing a Bin Laden raid tell-all, under a pseudonym? Fox News would like to tell you his name!

From the big fat EXCLUSIVE:

The book, "No Easy Day: The Firsthand Account of the Mission That Killed Osama Bin Laden," is set to hit shelves on Sept 11. It is penned under the pseudonym "Mark Owen," according to the publisher, but multiple sources told Fox News his name is in fact Matt Bissonnette, 36, of Wrangell, Alaska. Bissonnette could be exposing himself to legal trouble, as the Pentagon has not vetted the account.

Members of Navy SEAL team 6, the Special Operations unit responsible for killing Al Qaeda leader Usama bin Laden in Pakistan last Sunday, have expressed concerns about their safety and the safety of their families now that details of the mission have been made public.

...Rather than keeping the details secret, intelligence officials and senior administration officials briefed members of the press. It quickly leaked out that the mission was performed by 24 members of the elite and classified counterterrorism SEAL squadron, known as SEAL team 6. Despite that leak, Gates says the government continues to protect their identities.

How might Fishel justify this sudden Fox News editorial shift to "naming those involved in the Bin Laden raid is fantastic"? It's a scoop, for one. But this paragraph from today's EXCLUSIVE comes awfully close to shaming the author for putting others at risk:

The tell-all book also has apparently upset a large population of former and current SEAL members who worry about releasing information that could compromise future missions. One Navy SEAL told Fox News, "How do we tell our guys to stay quiet when this guy won't?" Other SEALs are expressing anger, with some going so far as to call him a "traitor."

Also, we'd say there's a not-insignifcant chance that Fox News just picked a random guy and has no idea who's writing the book.