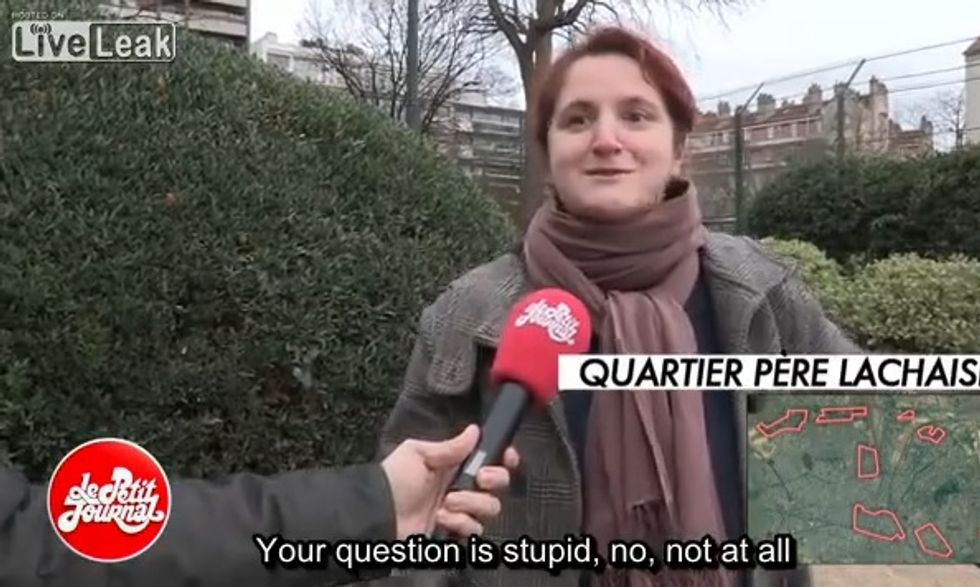 Drudge Sirens! Fox News actually apologized for spreading a completely made-up story about supposed "no-go zones" in England and France -- areas where officials supposedly have agreed to let Muslims run things according to the dictates of Sharia, without interference from police or fire services, and where non-Muslims enter at the risk of their own lives. On Saturday night, when even Fox News addicts aren't watching TV, Fox's Julie Banderas offered this "correction" to a myth the network had been pushing since shortly after the terrorist attacks in Paris:

Banderas carefully explained that, yeah, maybe Fox had made a teensy little mistake:

Over the course of this last week, we have made some regrettable errors on air regarding the Muslim population in Europe, particularly with regard to England and France. Now, this applies especially to discussions of so-called "no go zones," areas where non-Muslims allegedly aren’t allowed in and police supposedly won’t go.

To be clear, there is no formal designation of these zones in either country and no credible information to support the assertion there are specific areas in these countries that exclude individuals based solely on their religion.

She noted that there are indeed areas of high crime where police and other outsiders enter with caution, but said that similar places even exist in the USA. We figure that will translate, in rightwing imaginations, into "America has no-go zones where only Muslims are allowed, too! I saw it on Fox!"

While several Fox hosts have fretted about these nonexistent no-go zones, the biggest offender was Steve Emerson, a self-credentialed "terrorism expert" who claimed that the entire English city of Birmingham was "totally Muslim where non-Muslims just simply don’t go in." He also asserted that in "parts of London, there are actually Muslim religious police that actually beat and actually wound seriously anyone who doesn't dress according to Muslim, religious Muslim attire." Prime Minister David Cameron said that when he heard that claim, he "choked on his porridge," which suggests that Cameron may have been visiting some bears. He angrily denounced Emerson, saying he was "clearly an idiot," which was just right. Emerson apologized, saying that his remarks were "totally in error" but also not explaining where the hell he got that crazy idea in the first place; he also promised to make a donation to the Birmingham Children's Hospital. Probably a nice set of prayer rugs.

The New York Times notes that the entire myth seems to have started with a Russian TV report about a 1996 French Interior Ministry list of "Sensitive Urban Zones" -- basically, poor areas targeted for economic redevelopment -- which in a 2006 post by American anti-Muslim blogger Daniel Pipes got transformed into "proof" that there are parts of France "that the French state does not fully control." The wingnuttosphere did its usual job of repetition and exaggeration, and soon the idea of "no-go zones" was firmly established in the rightwing imagination -- even Wonkette's old frenemy Victoria Jackson firmly believes they exist, and she suspects they exist in the USA, too, like maybe in "Dearborne, MI" [sic]. She also links to a video by unapologetically fascist anti-Muslim group "Britain First," which she apparently approves of because it's labeled a "Christian Patrol" driving through "Muslim Occupied East London."

The best debunking of the myth we've seen is this clip from the French comedy show Le Petit Journal, which collected several examples of Fox hysteria, then traveled to the neighborhoods to look for Osama bin Laden t-shirts and terrified non-Muslims:

So now that Fox has apologized and said that there's no such thing as "no-go zones," we're betting that the panic will subside and the network will never ever mention them again for at least another day or two.